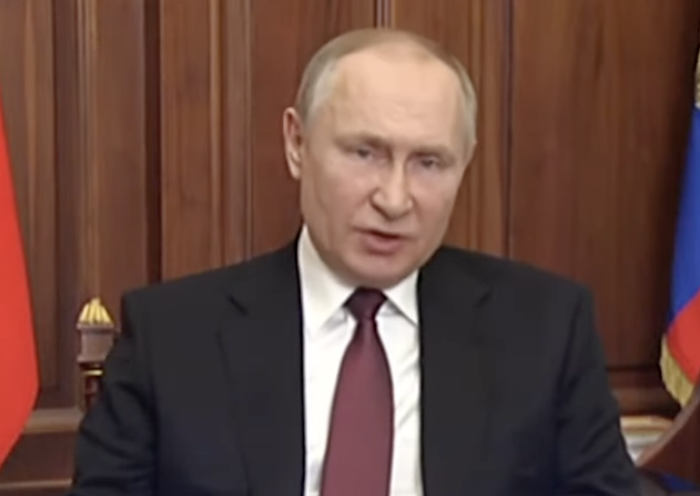 I hope this letter can reach you in some way. I have been dreaming of being a diplomat when I was at Renmin University of China in 1990. At that time we studied Gorbachev’s theory, but in 1991 sadly we saw the collapse of the Soviet Union.

When you came to power, you immediately became very popular in China. A book called Charmful Putin was sold very well in China. When you visited Shaolin Temple, it also became a very well known story. Recently I heard an ordinary man go to Beijing to see you. So I think you are really popular in China.

Many people admire you because you are not afraid of the super power. You are a strong man and you dare to fight. These are your merits.

But you might not be aware of your weak points. I like to point a few areas so that you can think about it and reflect a bit in order to take proper decisions.

There is a saying that every road leads to Rome. So there should be other ways to solve problems and alleviate burdens.

I can understand that you felt insulted when you demanded security concerns from the US, the NATO and the EU or OSSE because they simply said that each country has their own right to choose their security policy. It sounds like none of the Russia’s business.

I can understand that for 8 years Russia has been sanctioned similar to that of Iraq in the 1990 and even after 2000. Long term sanctions also harm the economy. And this time even more severe economic sanc´tions which is very harmful. It looks like the purpose is to crush the Russian economy. Indeed, the US and the NATO couldn’t face you directly because they worried about an escalation of war. But with all the other means, they have been very unfriendly.

Because it is not worthwhile to continue. When you launched the war, it was already a bad idea. In fact, you should not have launched the war. You should understand why the US likes to see you launch this war. They promised not to send any troops to Ukraine. This was just a go-ahead for you to launch the war. Why do they like you to fight this war? Because they like to have a war going on so that it made America look like very stable. Once investors see America is stable, they will all go to America and save their money in America.

So this war will help America to get dollars back to America. They do not need to spend troops and arms in it because they see you have already stationed troops in the border of Ukraine. They push you to fight so that there will be a war and people got scared to put their money in Europe. By putting Ukraine and Taiwan together, they created a scene that China will not be stable either. Donald Trump said immediately after you launched the attack in Ukraine that next will be “Taiwan” indicating or pushing China to do the same thing. This kind of instigation made investors very nervous and they all went to America.

The US is largest debtor in the world and they need to push the dollar back to America. One of the ways is to have a war. As you said, they launched the Yogoslavian war, the Iraq war, Libyan war and supported many violence in many countries. Why? Because as long as America is not at a war, that other places got war only show that America is safer.

This time the US didn’t fight because they mainly want to have money. To issue such an economic and financial sanction has no difference from robbery.

But they got a good excuse and it was you who gave them a good excuse. Russian troops are fighting in Ukraine. Even though you have many reasons, against all kind of backgrounds, to launch this war is not the right choice. You should have waited until they took action if you think they would do it because by then, you will have a good excuse. Then it would be they gave you an excuse. Now you gave them an excuse.

Chinese has a saying those who retreat 50 steps laughing at those who retreat 100 steps. But both of them were retreating. We all condemn the US for their Yugoslavian war and Iraqi War. That was not right. But now it looks like you are doing the same thing. That is not right either.

As you said, Ukraine is your brotherly neighbor. China has another saying the relatives from far away are not as good as those neighbours. You can’t choose neighbours. Therefore, you have to take all means to have a good relations with the neighbours.

We think the US is very cunning but we have to play smart too. You have to play smart too. The wall doesn’t work. The European Union especially don’t like walls. The only thing we can do is to reform and opening up. If you don’t fight, if you stay where you are, keep the situation calm, the US plan will fail. When you launched the war, you exactly behave as what the US wishes. They do not care about Ukrainian people’s fate. But people’s lives are more valuable than anything else.

Russian soldiers lives are also valuable than anything else. You have to think how much you put in the cost and how much you gain. It is time to stop the attack. And find a way to stay where you are. or where you were.

You can simply declare that you have fulfilled your goal and withdraw your troops from Ukraine. As Zelensky said, go back to where we were before February 24th.

Doing so will save a lot of lives. Save the world, save the peace. We need a peaceful world. Russia can also join in the reconstruction of all the countries that suffered from conflict and war.

Russia needs revitalization too through peaceful means and development.

Dear President Putin, when President Trump threatened to fight against North Korea, I told a story about the sun and the wind. The wind wants to blow away a man’s clothes. But the man holds the clothes even tighter. When the sun smiles, the man naturally takes off his clothes.

Similarly, use other measures to deal with relations with the neighbour, especially with Ukraine. Do have a sincere talk and conclude the attack as soon as possible.

You will be remembered as a man who is more capable than people thought.