A New Voyage to China by Ship Götheborg, a New Chapter of China-Sweden Cooperation 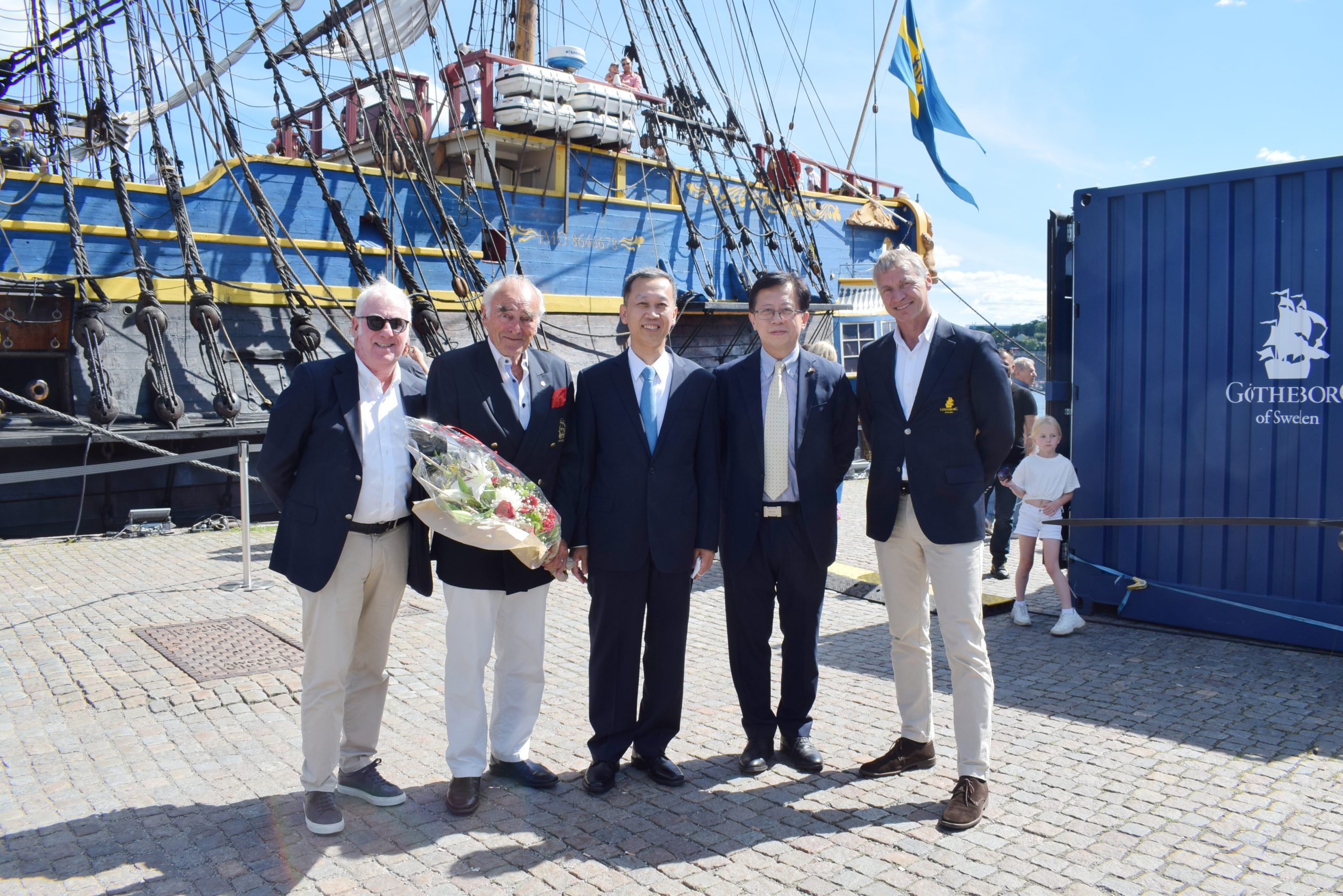 The nearly 300 years of friendship and exchanges between China and Sweden began with the first voyage to China made by the Ship Götheborg.

The Ship Götheborg first set sail to China in 1739, bringing Swedish black lead and cotton to China and returning to Sweden loaded with tea, silk and porcelain. This one-and-a-half year journey opened not only the two countries’ exchanges but also the China-Sweden maritime silk road. With the voyage, the Chinese goods brought back by the ship almost defined fashion in Sweden, and the Chinese people got to know Sweden—the country in the north of Europe. The Chinese people translated “Sverige” as the country of “瑞(rui)”, meaning “an auspicious country”, which says plenty about the friendly feelings the Chinese people had towards the Swedes.

Since the founding of the People’s Republic of China, Sweden became the first Western country to establish diplomatic relations with it, opening a new chapter of China-Sweden relations. In 1995, Sweden decided to rebuild the Götheborg, and King Carl XVI Gustaf took guardianship of the project. Many social groups, companies and individuals donated money and materials to the project. The Swedish engineers, despite not having the ship’s original design paper, started rebuilding the ship just based on the old ship’s wreckage and some literature. In 2006, the reborn Götheborg visited China again following the route that was used over 200 years ago. The Swedish King and Queen especially went to Guangzhou to receive the ship. President Xi Jinping also hoisted the sail for Götheborg during his visit to Sweden in 2010. If there is one image that summarizes the over 200 years of friendship between China and Sweden, it must be the Götheborg sailing through winds and tides.

The Götheborg is a witness to China-Sweden mutually beneficial cooperation. The trade between China and Sweden started over 200 years ago, with Swedish ships coming to China to buy and exchange for goods like tea and porcelain. When the Götheborg returned to Sweden from China for the third time, it surprisingly capsized outside the port after hitting a rock. What surprised the sailors was that they could still cover the cost of the trip after selling the porcelain they managed to recover from the water. This story ties “China” with “opportunity” even more closely in the minds of the Swedish people.

China-Sweden trade facilitated by the Götheborg has contributed to the prosperity of both Gothenburg and Sweden. The merchants sold the goods they bought from China to other European countries, and then invested much of the money they earned in iron workshops, shipyards, hospitals and schools, which played an important role in the promising development of Gothenburg as a major trading center and port in Europe.  Nowadays, Gothenburg enjoys even closer ties with China. Local companies like SKF have achieved fruitful cooperation with China. Volvo Cars has become a model of China-Sweden and China-Europe cooperation.

Fast forward over 200 years to today, we can see the once simple trade of “black lead and cotton for tea and porcelain” has expanded to a multi-dimensional cooperation including telecommunications, medicine, finance, transportation and green and low-carbon energy. Last year, the bilateral trade reached a record high of $20.9 billion. Swedish companies have invested nearly $6 billion in China, and Chinese companies $11.2 billion in Sweden. Chinese companies in Sweden have created 27,000 jobs. China-Sweden economic and trade cooperation has brought more real benefits to the two peoples, an example of which is the Slussen bridge connecting the Gamla Stan and south town of Stockholm.

At present, the interwoven impact of COVID-19 and Ukraine Crisis has disrupted the global industrial and supply chains, causing rising commodity prices and high inflation, and posing severe challenges to the world economy. Just as President Xi Jinping pointed out at the 2022 World Economic Forum, facts have shown once again that amid the raging torrents of a global crisis, countries are not riding separately in some 190 small boats, but are rather all in a giant ship on which our shared destiny hinges. Small boats may not survive a storm, but a giant ship is strong enough to brave a storm. Against this backdrop, we need solidarity and collaboration, mutually beneficial cooperation and connectivity more than ever. The new voyage of the Götheborg carries great significance and will build a bridge of friendship and hope between China and Sweden and between China and Europe. Though the bridge may be battered by wind, rain and waves from time to time, as long as we cooperate with an open mind and concerted efforts, China-Sweden cooperation will grow in scope and bring more benefits to our two countries and peoples, just as the Swedish sailors sang, “the tides are high and the voyage long, here-away we bound for China.” May the Götheborg sail smoothly and arrive in China safely, and may it add another chapter of friendship between the Chinese and Swedish people.

Note: The original Ship Götheborg was a famous Swedish oceangoing merchant ship in the 18th century. It sailed to Guangzhou, China three times between 1739 and 1745. In 1995, Sweden modeled on it to build Götheborg of Sweden which shipped to China in 2005. 17 years later, Götheborg of Sweden set sail once again on June 8, 2022. This time it will sail along the ancient route towards China and is expected to arrive in Shanghai in September 2023. Chinese Ambassador to Sweden Cui Aimin writes an article to celebrate its Asia Expedition 2022/2023 as Götheborg of Sweden is moored in Stockholm.Suggest To A Friend:   Print