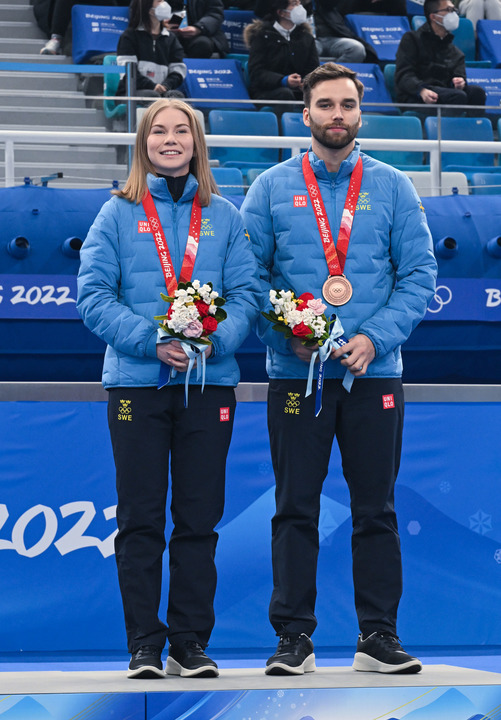 by Patrick Ekstrand, Fu Yiming and He Miao

STOCKHOLM, Feb. 14 (ChinaEuropeDialogue,CED) — Swedish curler Almida de Val expects her inbox to be bursting at the seams when she returns to work this week after she won a bronze medal at the Winter Olympics in Beijing.

De Val has become a social media sensation for her ability to balance a professional career with her passion for granite, ice and brooms as the automation and software engineer’s written request for leave from her company went viral on Chinese social media.

“When people told me that I was trending on Weibo (a Chinese social media platform), I was surprised and had to Google what it was all about. It has become a big hype,” de Val told Xinhua about her newfound fame that seems to have started when one of her email connections spotted an out-of-office message saying she was on leave preparing for the Olympics.

Besides the attention from Chinese netizens, the 24-year-old said she also had a happy stay in China.

The Swedish athlete said she was impressed with the Olympic village, the stadiums, the fabulous international vibe, the well-organized events, the impressive handling of the COVID-19 situation and, most importantly, the perfect conditions for her competition.

De Val and her teammate, Oskar Eriksson, 31, were among the first Swedish athletes to arrive in Beijing. But due to tight schedules and exhaustion from previous tournaments, she chose to watch the opening ceremony at the Bird’s Nest Stadium on television.

“I watched the fireworks from the apartment, which was near the stadium.”

When her other teammates arrived, some of them moved in with her in the five-bedroom sixth-floor apartment.

“The Olympic village was great and well-kept, as was the apartment, which I shared with three other teammates. And the vibe was fabulous with athletes from all over the world,” de Val recalled.

Bronze medalists Almida de Val (L) and Oskar Eriksson of Sweden attend the awarding ceremony of the curling mixed doubles event of the Beijing 2022 Winter Olympics at the National Aquatics Centre in Beijing, capital of China, Feb. 8, 2022. (Xinhua/Li He)

Despite the COVID-19 pandemic-related restrictions, she said she thoroughly enjoyed her first Olympic Games.

“The organizers handled the COVID-19 situation very well,” she said.

“Among other things, there were robots that scanned the body temperature of those in the event’s closed loop bubble area.” These “bubbles” were set up by the organizers to keep the Games COVID-free.

The “Ice Cube” (as the Chinese capital’s National Aquatics Center is colloquially known) was the venue for the curling events. It has been transformed from the “Water Cube” of the 2008 Summer Olympics, and was also part of one such “bubble.” The atmosphere there also made a strong impression on her.

“The stadium was really cool. It was massive with loads of big screens that informed us about what was happening. And the ice was really good. It was fast and consistent,” she said.

The perfect conditions ensured fair competitions. In the final, de Val and Eriksson added a mixed doubles medal to their country’s trophy cabinet after a 9-3 dismantling of reigning world champions Great Britain.

While the rest of the Swedish curling athletes are still in Beijing, de Val had to return to Sweden and to her job.

“My goal is to be able to make a living from curling,” she said, explaining that it is not as easy in Sweden as in many other countries, where the best curlers are salaried.

“I also realize that I need something to fall back on once my sporting career is over. Fortunately, my employer is very understanding,” she said, referring to the leave from work and the support she received from her employer.

She said she was happy to be able to add “Olympic medalist” to her profile on LinkedIn.

“I’ve realized that many consider my work-sports balance fascinating and it feels great to inspire people to pursue their dreams,” she said.  ■