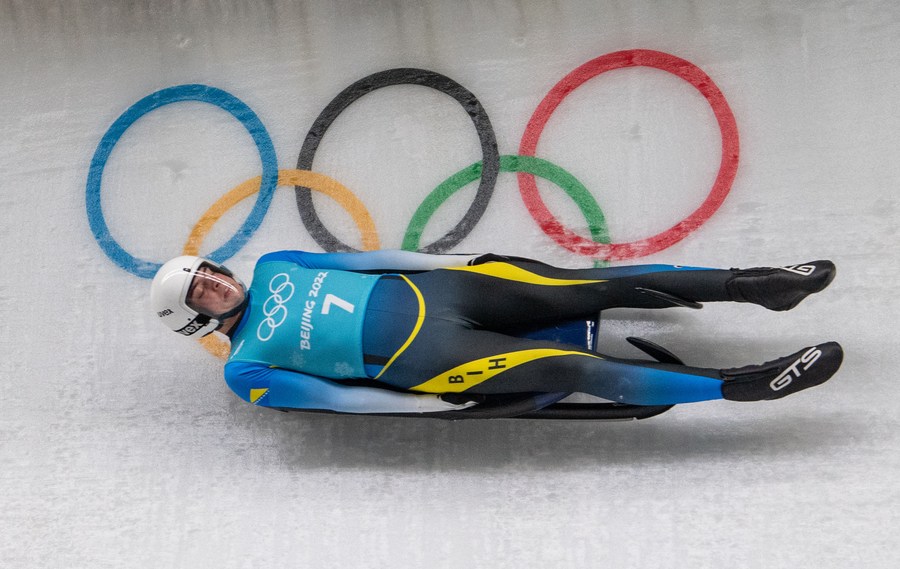 Bosnia and Herzegovina luger Mirza Nikolajev told Xinhua that he will never forget the friendly and hospitable atmosphere at Beijing Winter Olympics.

Stockholm, Feb. 22 (ChinaEuropeDialogue,CED) — “I will never forget the friendly and hospitable atmosphere in Beijing,” Mirza Nikolajev, a 20-year-old luger from Bosnia and Herzegovina, told Xinhua upon his return home from the Olympic Winter Games in the Chinese capital on Tuesday.

At the Olympic village in Beijing “everybody was always so cheerful and smiling all the time. They did their best to make you feel at home,” Mirza said in a video interview.

“I am happy to have had the opportunity to meet the bobsleigh teams from Brazil and the United States and the women’s monobob athletes from the Netherlands. As is customary at the Olympic Games, we all exchanged badges, and I’m proud to say that ours were highly sought after,” Mirza wrote in a post on the Bosnian Olympic Committee’s official website.

Nikolajev had the honor of carrying his country’s flag at the opening ceremony, and he won the hearts of lots of fans with his wink to the camera.

“When I left for Beijing I had some 900 followers on Instagram. Today, I have more than 29,000 and counting. It’s crazy and flattering at the same time. I cracked quite a few jokes with my girlfriend about the countless compliments I received from girls and the invitations to extend my stay in China,” he said upon his return to his hometown Sarajevo, capital of Bosnia, where he received a hero’s welcome from his parents Denis and Amina, brothers Faris and Bakir, and his whole neighborhood.

“My three sons are all athletic types, always eager to try out different sports, such as swimming, judo, handball, basketball, football, skating and skiing,” Denis said, explaining that Mirza fell in love with the adrenalin-fueled sport when he was 14.

It happened during a family trip to the Bobsleigh and Luge Track on Trebevic Mountain near Sarajevo, which was built for the 1984 Sarajevo Olympic Winter Games but was destroyed during the war in the 1990s. Partial renovations began in 2014, but the site can be used by lugers for summer training only, with sleds on wheels.

“We stumbled upon that summer training course, and his friend’s father invited him to try it out. After his first run, Mirza immediately said he found his sport,” Denis recalled.

“I have always been an individual rather than a team player,” Mirza said, explaining that one of the main reasons he likes the sport is the adrenaline rush he feels while racing downhill at over 110 kilometers per hour.

“It’s just you and no one else. You are on the sled and the helmet is pretty much your only protection,” he said, adding that his leg was still swollen and he still had an ice-burn from an accident that happened in Latvia in January this year.

“I couldn’t walk for a full week, my suit was shredded and I couldn’t believe that ice could give such a nasty burn,” he said, recalling that he, his family, and his trainer Senad Omanovic were all very worried that he would not be able to travel to Beijing at all.

His father described Mirza as an energetic and hardworking person, who is always on the move, but who still has time to meet friends, go to concerts and movies, or learn to play the guitar.

“Since he has spent a lot of time abroad competing, he learned enough to be able to communicate in Czech, Slovak and Russian. If he stayed a bit longer in Beijing he would be able to converse in Chinese,” Denis said as he recalled the excitement, happiness and pride the whole family felt as they watched Mirza carry the national flag at the opening ceremony.

In fact, Mirza did pick up a few words in Chinese during his stay in Beijing. In a video he posted on Instagram on Feb. 7, he thanked his fans for their love and support and said he loved his Olympic hosts in Chinese. This post received more than 12,000 likes and 7,700 comments in just two days.

Mirza said he still could not believe how a simple gesture such as winking could elicit such a huge reaction. He admitted that he was very nervous during the opening ceremony, as it dawned on him there and then how big a deal it was to be part of his country’s Olympic team.

Until the beginning of this season, Nikolajev had competed using an old, beat-up 13-year-old sled. But after people recognized his talent, enthusiasm and good results, the Bosnian diaspora in the United States and in Europe organized a fundraiser and bought him a new sled.

“It was amazing. I can’t thank them enough. I am still getting used to this new and very expensive sled and to the way it reacts,” Mirza said.

“Young people should follow their interests, whether it’s sports, music or art, and give their best. The result will come,” Mirza said.  ■