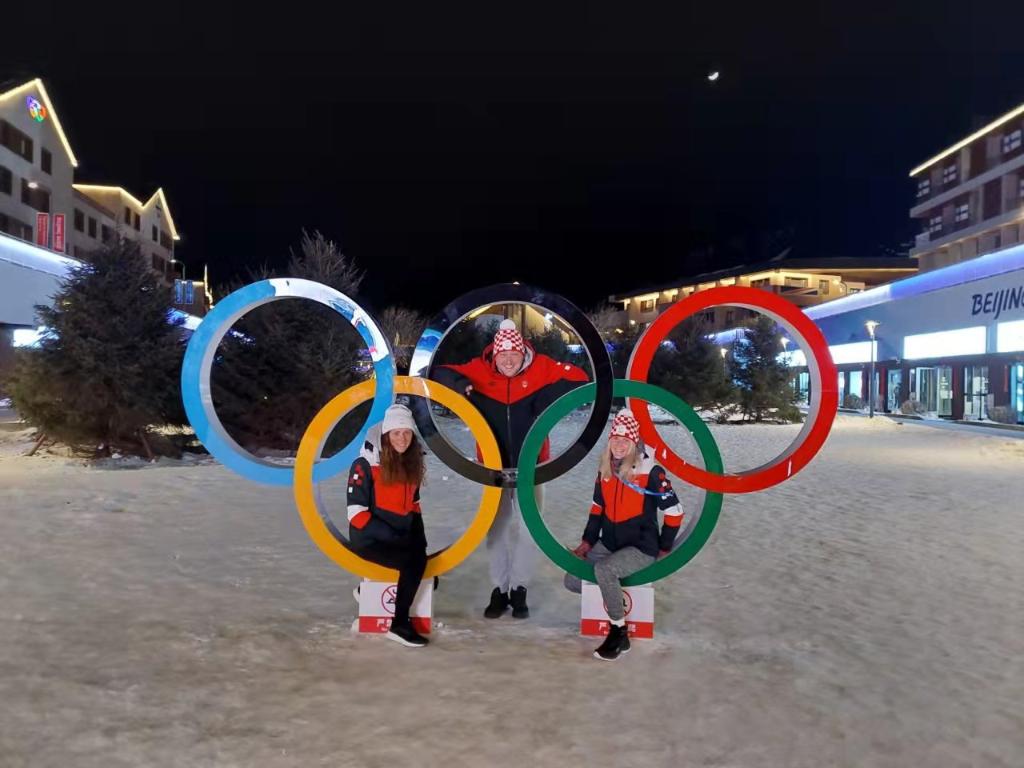 Vedrana Malec and her teammates take pictures with the Olympic rings. (courtesy of Vedrana Malec)

“Everyone is smiling and kind,” said Croatia’s three-time Olympian skier Malec about her experience in Beijing.

Stockholm, Feb. 22 (ChinaEuropeDialogue, CED) — As a veteran of the Winter Olympics, Croatian cross-country skier Vedrana Malec was amazed by the hospitality and cordiality of her Beijing hosts, and the Star Wars-like machines and robots washing the floors and serving food.

“Whatever we need, the Chinese handle it right away,” Malec, one of seven athletes representing Croatia, told Xinhua on Friday. “Everyone is smiling and kind.”

On Thursday, Malec competed in the 10km cross-country race and was preparing for the 30km challenge. After competing at Sochi 2014 and PyeongChang 2018, a medal still eludes her.

“When I got here, I was immediately impressed by how everything appears to work perfectly here. We knew in advance that there will be a check-in procedure, so we were a little worried, but it was a breeze,” Malec wrote.

When she needed technical help with her ski equipment, assistance was given forthwith, she recalled, adding that it was clear that the organizers had prepared for all eventualities well in advance.

“I did not encounter any problems,” wrote the 31-year-old, who has been to Beijing three times.

This may well turn out to be the best organized Olympic Winter Games to date, commented Malec, who carried her country’s flag at the closing ceremony of the 2014 Winter Olympics.

Describing the Olympic village as “beautiful” and “well-arranged,” Malec was also impressed by the high-tech amenities there.

“Machines resembling Star Wars characters wash the floors, robots serve food. China has gone way ahead of Europe when it comes to state-of-the-art technology,” she wrote.

Malec wrote that she will not forget the Croatian cross-country skiing team’s Chinese volunteer, Karolina, a student of Croatian studies in Beijing.

Vedrana Malec takes pictures with her teammate in the Olympic village. (courtesy of Vedrana Malec)

“She adores Croatian football player Luka Modric and my country’s entire national football team. She knows everything about them, and also about other Croatian athletes, such as tennis player Goran Ivanisevic.”

Karolina is interested in proverbs popular in Croatia, so Malec taught her one: “It is good everywhere, but it is the best at home.” In return, Karolina taught Malec and her teammates a few proverbs in Chinese.

Because of the pandemic, Malec and her teammates were not able to visit downtown Beijing and its historical sites, and to go to the Great Wall.

“Many of my Croatian teammates are here for the first time and they are very sorry that the circumstances do not allow them to see more of this beautiful country,” Malec added.