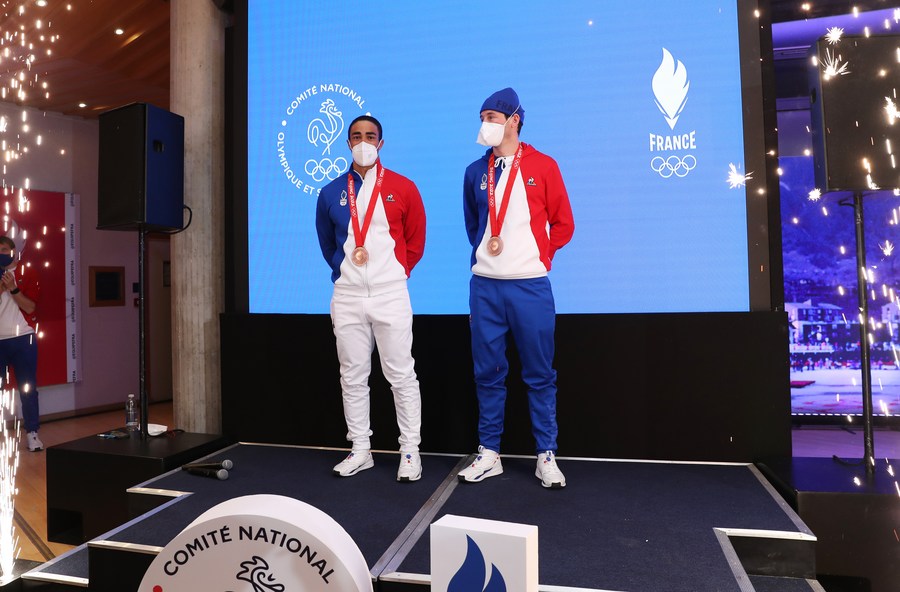 French cross-country skier Hugo Lapalus has just returned from Beijing 2022 with a bronze medal, looking to bigger achievement at the next Olympic Winter Games in 2026.

Stockholm, Feb. 22 (ChinaEuropeDialogue, CED) — Before going to Beijing to make his Olympic debut, French cross-country skier Hugo Lapalus told himself — you are not going there for sightseeing, but to perform, to compete for a medal.

When the 23-year-old came back to his homeland on Thursday with a bronze medal around his neck, receiving a warm welcome by the supporters at the headquarters of the French Olympic Committee, he was proud to tell everyone that he had kept his promise.

In the men’s 4x10km cross-country relay event on February 13 at the Beijing Olympic Winter Games, the Clusaz-born young man bagged a precious bronze medal for the French team with his teammates Richard Jouve, Clement Parisse and Maurice Manificat.

“It’s for sure like a dream for me, because there, to achieve in the relay, it’s something that is super important for the French team,” Lapalus told Xinhua upon his return from the Games. “I thought a lot about it when I was younger in the last few years too. And to achieve that with a team is so cool.”

“I think the Olympic Games is one of the dreams for the greatest athletes. To have a medal at this event is the most beautiful thing there.”

In Beijing 2022, Lapalus had also participated in the 15km classic event, in which he finished seventh, not bad for an Olympic rookie.

When talking about his life at the Olympic Village, Lapalus said it was great because they were “free to do everything except for leaving the village” and the infrastructure and the stadium were both really good.

“For me, (the experience is) pretty good. It was my first Games. The sanitary side didn’t bother me too much, it was my dream to participate in an event like this. So it went really well,” Lapalus said.

“It was really free. We just didn’t have the right to leave the village. The days were busy between training sessions, a bit of rest. And you have to go eat,” he added.

Born in a commune with the long-time tradition of skiing and famous for its Olympic gold medalist Edgar Grospiron in Albertville 1992, Lapalus started downhill skiing at the age of six. But at 12, he switched to cross-country because he thought the latter corresponded more to his expectation. He was recruited to the national team at the age of 17, but of course, it was too early for him to compete in senior level then.

“If someone had told me that I would be part of this adventure two years ago, I would not necessarily have believed it,” Lapalus said.

Four years ago, the French team issued a list of young athletes who had the potentials to represent France at the Beijing Olympics, Lapalus’s name was on it.

The opportunity came just after he finished a stellar 2020-2021 season — ranking seventh in the World Cup overall standings, winning two World Championships medals including a senior 4x10km relay bronze and a U23 15km free gold. At the end of the season, he was crowned FIS Men’s U23 Rookie of the year.

At only 23 years old, Lapalus still has a long way to go. There is no doubt that if he can keep improving like what he did in the past two years, he will have a bigger stage at the next Olympic Winter Games.  ■