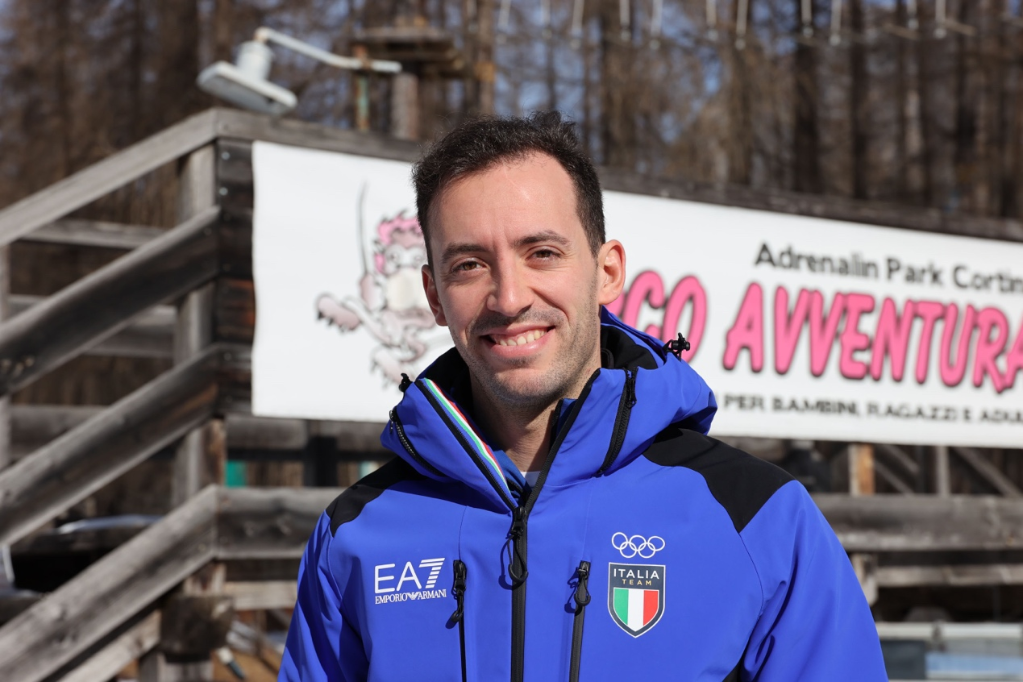 Mattia Gaspari was in the interview with Xinhua at his hometown. (Xinhua/Liu Yongqiu)

To skeleton Olympian Mattia Gaspari, the Winter Olympics means a special bond since northern Italy’s Cortina d’Ampezzo, his hometown, will co-host the next edition of the event with Milan in 2026.

Stockholm, Italy, Feb. 22 (ChinaEuropeDialogue, CED) — A 14-day visit to Beijing has left Italian Mattia Gaspari beautiful memories. Recalling the days in Beijing after returning to Italy, the skeleton Olympian told Xinhua that he had raced on the most magnificent track he has ever seen.

To Gaspari, the Winter Olympics means a special bond since northern Italy’s Cortina d’Ampezzo, his hometown, will co-host the next edition of the event with Milan in 2026.

Looking ahead, he said the 2026 games should be hosted in a way like what had happened in Beijing, where people from different countries and regions learned from each other and collaborated.

“Italy and China have a close relationship which I think is really important, and we should path a way where we can more easily cooperate and exchange information and ideas,” Gaspari told Xinhua.

“I went to China for the first time last October to try the Olympic track. I saw the Great Wall of China and it was almost a tourist experience,” said the first-time Olympian, who was among 119 athletes dispatched by Italy to compete in 14 disciplines.

“The second time was even more beautiful because we entered the Winter Olympics with everything focusing on the games. And you could feel the Olympic spirit because there are so many athletes from different nations and of different disciplines,” said Gaspari.

Gaspari raced in China’s National Sliding Centre, a venue that also hosted bobsleigh and luge events. Built in the mountains in Yanqing, a suburban district in Beijing, the track has 16 curves with different angles and slopes.

“We have never seen a track like this. It was a track as big as a structure and the scene was beautiful to see when I stepped onto the top of the track,” Gaspari recalled.

Cortina d’Ampezzo, a well-known destination for ski-lovers, boasts a tradition of winter sports with some 115km of pistes and snow coverage of over 95 percent from December to April. It hosted the Winter Olympics in 1956 and will take the torch from Beijing to jointly host the 2026 edition with Milan.

Olympics could provide a platform for better understanding, said Gaspari. “Just the fact of meeting and being together helps. Just like in Beijing, we stayed together, and I can see how other nations work, how they organize events, and you can learn and collaborate on various things.”

Gaspari expressed the belief that, just like it was the mountains that helped Cortina d’Ampezzo become a host city of the event, there were elements that offered him the possibility of becoming a professional athlete.

“More than the city, it was the people who played sports before me, because my families and other people I met have the mentality of competition. They had to train every day to reach a certain goal,” said Gaspari, whose mother and younger sister are also in winter sports professions.

Mattia Gaspari was in the interview with Xinhua at his hometown. (Xinhua/Liu Yongqiu)

China and Italy have agreed to support each other in hosting the Winter Olympics and to expand new areas of cooperation in the two countries’ ice and snow industries.

“You can always learn from someone. I am not an expert in economics, but I believe that a commercial relationship between the two countries is important. I hope that there is a simplification of things, that everything becomes easier in collaborating and exchanging information and ideas,” said Gaspari.

Gaspari expressed hope that the sustainability of the facilities in Cortina d’Ampezzo will be enhanced in a way like Beijing had remodeled some stadiums originally for the 2008 Summer Olympics and recast an obsolete industrial area into an winter sport site.

It would be necessary to take care of sustainability and use systems that allow energy savings in all structures, he said.

“Certainly, reusing the facilities is the future of the Olympic Games. Here we have a beautiful track which I hope young people can use for skeleton, bobsleigh and sledding, not only from Italy but also from all over the world,” Gaspari added.