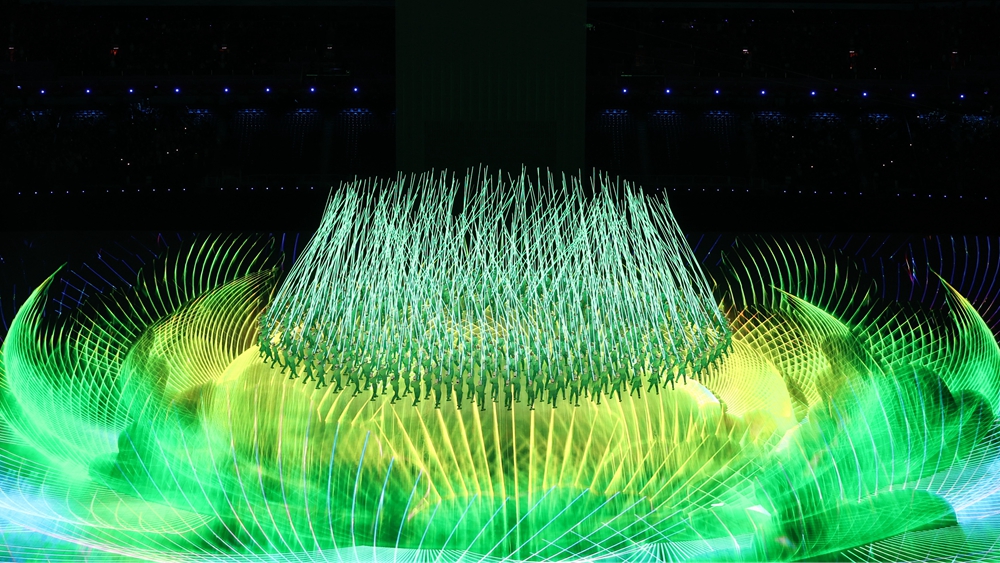 Pal Schmitt took a picture outside the National Stadium before the Beijing 2022 Winter Olympics openning ceremony on Feb. 4. (provided by Pal Schmitt)

Stockholm, Feb. 22 (ChinaEuropeDialogue,CED) — International Olympic Committee (IOC) member Pal Schmitt, president of Hungary between 2010 and 2012, is in Beijing for the Olympic Winter Games.

The two-time Olympic champion fencer has embraced the motto of the Games – “Together for a Shared Future” – and hopes to personally award medals to Chinese-Hungarian speed skater brothers Liu Shaolin and Liu Shaoang who anchored in Hungary’s historic short track speed skating win at the PyeongChang Olympics.

The Olympic delegation of the United States of America parade into the National Stadium during the opening ceremony of the Beijing 2022 Olympic Winter Games in Beijing, capital of China, Feb. 4, 2022. (Xinhua/Wang Yuguo)

Schmitt called the opening ceremony a “historic” experience, pointing out that it was the first time in Olympic history that the same city has hosted both Summer and Winter Games.

“I’m here in this stadium for the second time: in 2008 for the Summer Games and now in 2022 for the Winter Games. Both of these are excellent and unforgettable experiences,” said the 79-year-old.

“We really very much appreciate the Chinese leadership, the Chinese Olympic Committee, the preparation committee for the Games, that they made all this possible,” he added.

In consideration for the safety of the athletes amid the pandemic, Beijing 2022 would organize spectators to watch the competitions on site. Schmitt said he well understood the decision.

“The main issue is the athletes, the competitors,” Schmitt said, adding that thanks to the Games’ live television and social media coverage, the world is able to follow the action regardless.

“It is very important that the Games could open now. The previous Olympic Games had to be postponed because of the pandemic. But here we are, it proves that sports can win over any difficulties.”

Schmitt has watched many Summer Olympics, and although the Winter Games are different, he said that the values are the same: all the athletes are dreaming to be Olympians, to be members of their national delegation, and they all want to achieve a good result, to win a medal or to reach their personal best at the Olympics.

Schmitt was a successful fencer in his youth, winning two Olympic gold medals in the team epee event at the 1968 and 1972 Games.

He also won team and individual World Championships and collected several silver and bronze medals until his retirement from sport in 1977.

For Schmitt, the Beijing Winter Olympics is also special because if destiny is favorable, he might get the chance to award medals to the Liu brothers for a second time.

The Hungarian team includes 18 athletes including Olympic 5,000m short track speed skating relay winners Liu brothers. The country is not a winter sports powerhouse, but the Liu brothers stand a very good chance on the ice rink, he said.

“The Liu brothers are here again. With luck, and if they are good enough to win a medal, I would be very proud to repeat the ceremony, because in PyeongChang, South Korea, I was honored to give them the gold medal,” Schmitt recalled.

Born to a Chinese father and a Hungarian mother, the Liu brothers symbolize the two countries’ relations.

If the brothers’ dream comes true, they will wave both nations’ flags. “I understand that their mother prepared a double Chinese-Hungarian flag. They are as much Chinese as Hungarians at heart, and we appreciate and like them very much,” Schmitt said.

“The Olympics are for peace, to unite different people, with one aim, to be together, to declare that we are united, we are together for a shared future,” stressed Schmitt.

“I am sorry that certain countries have declared a kind of political boycott. The Olympics is not about politics, it should not solve the problems of politicians. Let the athletes be there – that is the most important thing,” he stressed.  ■