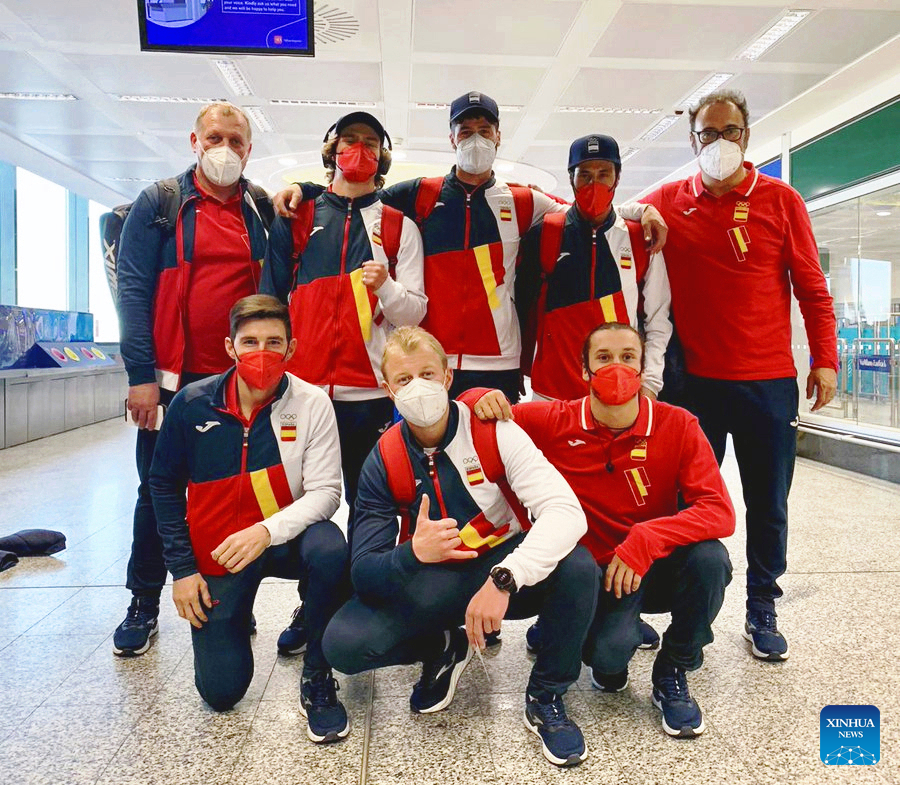 Spanish freestyle skier Thibault Magnin (2nd L, back), poses for a group photo with members of the Olympic delegation of Spain before boarding a plane to Beijing, at Barajas Airport in Madrid, Spain, on Jan. 30, 2022.(Xinhua)

Stockholm, Feb. 8 (CED) — Competing in the Olympic Winter Games is the realization of a “lifelong dream,” said Spanish freestyle skier Thibault Magnin from Beijing, adding that his Olympic goals are “to enjoy my skiing, represent Spain, and do my best to inspire people.”

In a video recorded in the Olympic Village in Beijing, which opened its doors to athletes and team officials on Jan. 27, Magnin said he was overjoyed to be present at the Beijing Olympic Winter Games, calling it an achievement that he has dreamed about all his life.

Magnin was born in Fribourg, Switzerland, to a Swiss father and a Spanish mother. In the Swiss mountains, he developed a keen interest in snow sports, especially freestyle skiing. However, when he and his family moved to the warmer climate of Mallorca, Spain, skiing wasn’t so easy for him. Later, he went to the United States to finish his studies while continuing to ski.

Being an athlete and a student, Magnin plays another role in his life: a model. “I signed with some modeling agencies in Barcelona, but it doesn’t change that my priority now is skiing. Being a model gives me something to do in the summer,” Magnin said.

Magnin became the first Spaniard to reach a top 10 in freestyle skiing when he came ninth in the Big Air event at the World Championships in Aspen (USA) last year. The Big Air jump in Shougang impressed him with its size in a Big Air World Cup event in 2019.

“It’s the best jump in the world. It’s a city Big Air that’s much better than the others because it’s a giant structure. It looks like we’re on a slope but we’re actually on a metal structure. So I’m really looking forward to competing in the Big Air in a few days,” he said, referring to the sports facility in Shougang, which is set to host four medal events during the Olympic Winter Games.

Dubbed by the Spanish media as the “genius and pearl” of the country’s sports world, the skier and teammate Javi Lliso are the first Spaniards to freeski at the Olympic Winter Games.

“The Olympics are a big event and I want to go home with a medal,” Magnin said. They competed on the Big Air Shougang on Monday, with Lliso finishing ninth to qualify for the finals on Wednesday and Magnin being disqualified on 22nd.

Magnin will also compete in the men’s slopestyle competition, which takes place on Feb. 14 and 15 at the Genting Snow Park in Zhangjiakou. In the video, the Spanish skier said he has not visited or competed at the snow park, but from what he has seen of the venue, “it looks really good.”

A freestyle bronze medal winner in the 2018 Junior World Championships, Magnin said that “winning a medal would be a dream come true.” Yet, he also insisted that there is nothing more important in the Olympics than going all out: “We’re going to fight to be up there and give everything, and as long as I do my best, I’ll be happy.”

Despite COVID-19 protocols, the journey to Beijing “went quite smoothly,” said Magnin, who is settling into what he described as the “incredible” Olympic Village, adding “seeing all the nations here is an incredible experience, and we’re going to enjoy it.”

A total of 14 athletes from Spain participate in the Beijing Winter Olympics. At the opening ceremony of the Winter Olympics, skeleton pilot Ander Mirambell and Snowboarder Queralt Castellet served as flag bearers for the Spanish delegation.

He said: “The Spanish team will do everything in the Winter Olympics. The athletes are always trying to improve their game, try to get better results and win medals. Other factors should not be allowed to distort the sporting content of the event.” ■

Spanish freestyle skier Thibault Magnin poses for a photo with health workers at the Olympic Village in Beijing, capital of China, on Feb. 1, 2022.(Xinhua)