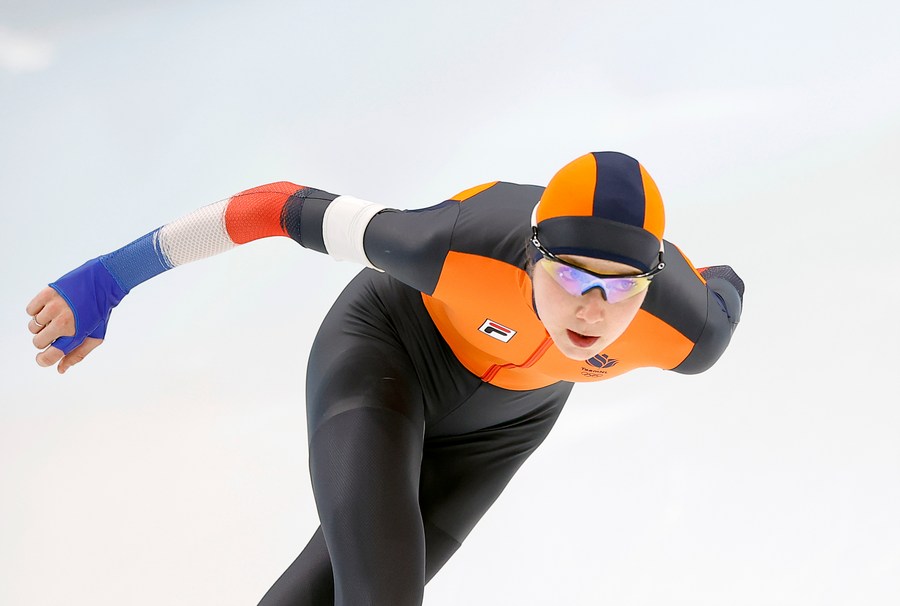 Amateur rider Sanne in’t Hof is the surprise package of the Dutch spead skating squad, and at the same time ready to cause another surprise at Beijing 2022 Olympics.

Stockholm, Feb. 22 (CED) — As speed skating is a big and professional sport in the Netherlands, amateur rider Sanne in’t Hof is the surprise package of the Dutch squad, enjoying this unique experience and at the same time ready to cause another surprise at the Beijing 2022 on the 5,000m event set for Thursday.

IT STARTS WITH A QUESTION

“Do you like Chinese?” coach Arjen Wolters asked in’t Hof in late December 2021 as they stood in the Thialf ice arena in Heerenveen, the Netherlands, during the finishing race of the Dutch Olympic qualifying speed skating tournament.

In’t Hof didn’t quite understand the question. She thought it was about the food of that evening as her team hadn’t ordered anything yet for diner on their last night at the Bed and Breakfast they had stayed in.

“Not in particular,” she replied.

With his terse question, Wolters referred to the food they will be offered during their stay in Beijing. He made the comment when it became clear to him that Irene Schouten would win and that Joy Beune would not set a better time than In ‘t Hof, which would mean an Olympic ticket for her. “Now, I have to like Chinese,” In ‘t Hof replied as it all fell into place.

On Jan. 26, In’t Hof left for Beijing with the Dutch team, including 17 fellow speed skaters. Upon arrival, the Olympic debutant was amazed.

“Wow, how big, I thought,” the 23-year-old told Xinhua in an interview. “This is the real deal. Everything was very well arranged too. We were transported to the Olympic village by bus through the middle of the city. All roads were closed. I just felt like a royalty. The road to the village was already Olympic as Olympic flags and figures hung on every lamppost. The whole city was decorated and I have even seen life-size statues of the Olympic mascot. On the way to the skating hall I also saw some real Chinese temples. I think Beijing is a beautiful city. And a clean city.”

In the Olympic village, the Dutch team shares a block with their fellow athletes from Norway and Denmark. “When I wake up, I go for a walk,” In’t Hof said. “I love to feel the sun on my face. I can go out whenever I want, we have that freedom. Only we are not allowed to go outside the village. The weather is beautiful, sunny. About minus 7 to minus 9 degrees Celsius in the morning and about minus 2 to 2 degrees later. The air is drier than in the Netherlands and therefore it feels less cold.”

GETTING EMOTIONAL IN SKATING OVAL

This Thursday is D-Day for in’t Hof on the 5,000m at the speed skating arena, formally known as the Beijing National Speed Skating Oval. The top favorite for gold is her compatriot, 29-year-old Schouten.

“I have the third fastest time in the world this season,” In’t Hof said, a third place after Schouten and Canadian skater Isabelle Weidemann. “I just have to stay calm and show what I can do. Then I can’t blame myself. I hope for a medal, but I’m just really looking forward to it. It is the most beautiful experience in my life so far.”

What makes In’t Hof’s achievement even more special is that she is the only amateur of the Dutch squad of skating professionals. Last summer, she worked at a COVID-19 vaccination center in Heerenveen, her hometown. She didn’t do that just to earn some extra money.

“I wanted to have something to do next to my studies and skating,” In’t Hof explained. “I wanted to feel that I was useful to society. It also taught me to put things into perspective. If you have not trained properly, you can get a negative feeling. At work I quickly forgot that, and I heard stories from the people there. Then I wouldn’t worry anymore. Tomorrow is a new day, with new opportunities. That’s the mindset that helped me.”

In’t Hof put the crown on a strong season with her second place at the Olympic qualifying tournament in Heerenveen.

A few days ago, she entered the Beijing National Speed Skating Oval for the first time to train. She was impressed.

“So huge, I have never seen such a big skating stadium,” she said. “The stadium is also very beautiful. I was amazed and got emotional the first time I got in. I’m really here now, I thought. At the next level. I did this.”

“Of course, the food is really good,” she said. “There is a choice of different cuisines in the dining hall. More than enough choice. You have the Chinese food stand, the international, halal food. One day I take a pasta and the next day I eat Chinese. From the Chinese cuisine I often take rice with soy sauce, noodles and Chinese vegetables. Very tasty.” ■