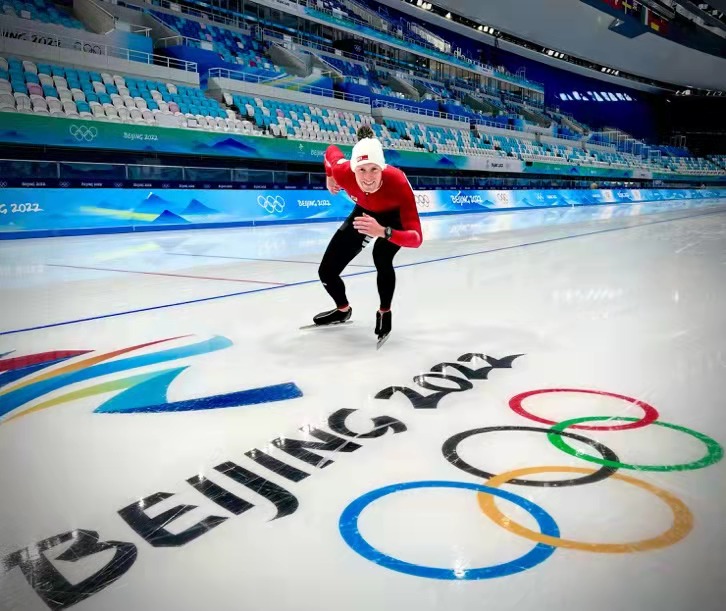 Stockholm, Feb. 22 (ChinaEuropeDialogue,CED) — Danish speed skater Viktor Hald Thorup says he is happy about his second Olympic appearance at Beijing 2022 and his life in the Olympic Village.

“I’m so fortunate that I managed to qualify for the Winter Olympics and the athletes’ village a big plus to me,” Thorup told Xinhua.

The two-time Olympian took time out of his race preparations to share with Xinhua and on his YouTube channel his personal “emotions and experience” as one of the athletes competing in the 2022 Winter Olympics in Beijing.

Thorup holds Danish national records over the 1,500m, 3,000m and 5,000m distance, and he is a medal contender in the mass start event in Beijing.

“I’m so fortunate that I managed to qualify for the Olympics, very few people get to have that experience. And that’s why I decided to share all the emotions, the entire trip,” said the 27-year-old.

The Danish team’s journey to China began on a private flight. Thorup is one of 62 athletes (33 men and 29 women) competing in five sports.

Upon landing in China, he noted the professionalism of the Chinese hosts’ COVID-19 safety precautions as he passed through customs and collected his luggage.

“The Chinese people are really careful when it comes to how they’re dressed in their equipment … it also gives you a feeling of safety, so I kind of like that,” he said.

Further COVID-19 precautions continued in the Olympic Village. Having received his negative PCR test result, Thorup went out to explore the village, which he described as a world “completely closed to the public” but still “pretty cool.”

Thorup described the village as a relaxed environment, where “thousands of people, athletes, staff and volunteers” can roam freely “as long as they wear a mask.”

“My fiancee is Russian and she’s also here representing Russia in short track speed skating. We will just hang out as if we were on a nice couple’s vacation together, so that’s a big plus for me.”

Thorup was also impressed by what the organizers have done to make the Olympic Village feel like “an actual village.”

“Supermarkets, souvenir stores … there’s a Pizza Hut, there’s a KFC. There’s a bank, a big gym, a lot of things to do — things to keep you occupied.”

Thorup also appreciated the comfortable “hotel style” accommodation provided for the athletes, as well as the enormous “24/7 food court,” where “almost any food or beverage imaginable is available,” but said he understood that for “health safety reasons” food could only be consumed there in “tiny table cabins.”

“It’s just awesome being here and makes it easy for all the athletes who follow strict diets,” he said.

He added that he greatly appreciated the Chinese volunteers, who help the athletes in fluent English and make the village “comfortable and convenient in many ways.”  ■