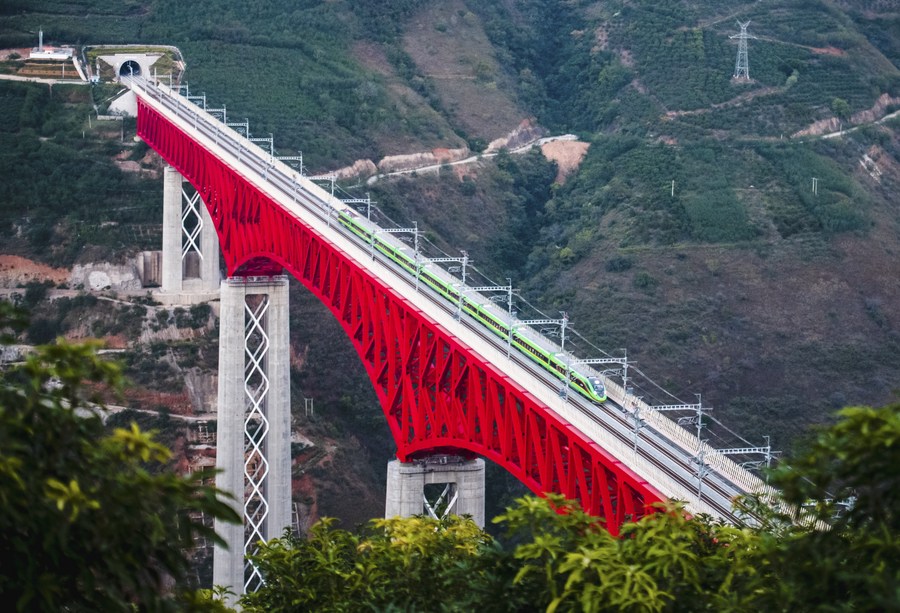 Staff members pose for photos beside the Lane Xang EMU train of the China-Laos Railway at the Vientiane railway station in Vientiane, capital of Laos, Dec. 2, 2021. (Photo by Kaikeo Saiyasane/Xinhua)

BEIJING, Jan. 18 (Xinhua) — With trains rumbling down new tracks, the only landlocked country in Southeast Asia — Laos, has just been unlocked, poised to transform itself into a hub connecting the fast-growing region to markets as far away as in Europe.

Since it was opened to traffic on Dec. 3, the China-Laos Railway has been getting busier. Lao travelers wait in long queues to buy highly sought-after passenger tickets on weekends and holidays, and more than 100 million U.S. dollars’ worth of goods were transported across the border via the southeastern Chinese city of Kunming within one month.

To development, connectivity matters, especially in the era of globalization. It is a most urgent need for many developing countries, and a priority for what is widely known as “Xiconomics,” Chinese President Xi Jinping’s philosophy on promoting both domestic and global economic development.

Guided by Xiconomics, China has been doing its best to help improve global connectivity and promote common growth over recent years, effectively upgrading globalization into what can be referred to as “growbalization” (growth plus globalization).

Now against the backdrop of a raging pandemic, that is making a difference.

Thanks to the Belt and Road Initiative (BRI), the Laos-China Railway has been completed and put into operation, and the Lao people have finally realized their railway dream, said Lao President Thongloun Sisoulith.

The importance of transportation cannot be overemphasized. It is the artery of a nation, and of the globalized world. As a popular Chinese saying goes, “Roads lead to riches.”

The World Bank has estimated that the China-Laos Railway could significantly reduce land transport prices by 40 to 50 percent between Vientiane and Kunming, and by 32 percent between Kunming and the Port of Laem Chabang in Thailand. As the railway connects Laos to the vast BRI network, including the China-Europe Railway Express, aggregate income in the country could be increased by up to 21 percent over the long term.

Across Eurasia, the China-Europe Railway Express has so far transported goods worth more than 200 billion dollars, greatly contributing to the stability of the international supply chains.

In the past decades, China has both benefited from globalization, and contributed to its development. China’s gross domestic product has increased 8.1 percent year on year in 2021, leading the world to recover from the once-in-a-century COVID-19 pandemic.

Economic globalization is the trend of the times, Xi reiterated in a landmark speech on Monday at the 2022 World Economic Forum (WEF) virtual session, calling for joint efforts to make “economic globalization more open, inclusive, balanced and beneficial for all” and fully unleash “the vitality of the world economy.”

“We need to discard a Cold War mentality and seek peaceful coexistence and win-win outcomes,” he said, pointing out that “confrontation does not solve problems; it only invites catastrophic consequences.”

It is not the first time the Chinese president has expounded his vision on globalization. Five years ago, Xi expressed China’s willingness to share its development achievements with the world.

“China’s development is an opportunity for the world,” Xi said in a keynote speech at the 2017 annual meeting of the WEF. “We will open our arms to the people of other countries and welcome them aboard the express train of China’s development.”

Across the world, China’s development and cooperation with other countries have changed the life trajectory of numerous people. In Africa, China helped Kenya build the country’s first railway since its independence, which links its two largest cities — Nairobi and Mombasa — and allows people to work in satellite cities and towns and join their families within hours.

Mohammad Nauman, a young Pakistani man, made a career decision seven years ago when China and Pakistan decided to build Pakistan’s first metro system. He became a technician at the metro company. In 2020, the line was opened to traffic.

“It was very amazing for me that this whole connectivity was coming to my country,” said Nauman.

Nauman is just one of many who have enjoyed career opportunities from China-proposed initiatives aimed at leveraging its own development to promote the common development of the world.

“The Belt and Road Initiative addresses the crux of the problem of developing countries: effective infrastructure, from rail and ports to power and communications,” said Robert Lawrence Kuhn, chairman of the Kuhn Foundation, in a recent interview with Xinhua.

“China has, by far, the most experience in designing and building infrastructure in recent decades and its commitment to work with the developing world is a major step in redressing deep global imbalances,” Kuhn said.

By assisting countries to get on its “express train,” China is seeking win-win outcomes. Now it serves as a growth globalizer that is well positioned to further boost economic globalization for common prosperity.

Different from what Western countries have done in the past century, China’s growbalization drive is based on its openness and sustained readiness to share development opportunities with the rest of the world. So far, the BRI has become the world’s broadest and largest platform for international cooperation.

China respects the integrity of nations, upholds the principle of non-interference in the internal affairs of other nations, and “respects the equality of all nations, small or large, developing or developed,” Kuhn said.

The call to advance development for all is in line with China’s domestic endeavor for common prosperity, which has successfully lifted more than 770 million people out of poverty, a miraculous achievement in human history.

Behind this cause is the country’s people-centered principle. Putting people first, the Chinese government has accurately identified the causes of poverty and mobilized vast resources to address them.

Now with global inequality on the rise and COVID-19 exposing social ruptures, the same principle is being increasingly prioritized in China’s growbalization drive.

“No matter what difficulties may come our way, we must adhere to a people-centered philosophy of development, place development and livelihoods front and center in global macro-policies,” Xi said in his speech on Monday.

“I think there is a common understanding that China is a real force for good. It means what it says. And it says to itself what it should do, and applies it too,” said Jean-Jacques de Dardel, a former ambassador of Switzerland to China. “I think China is doing a great job.”