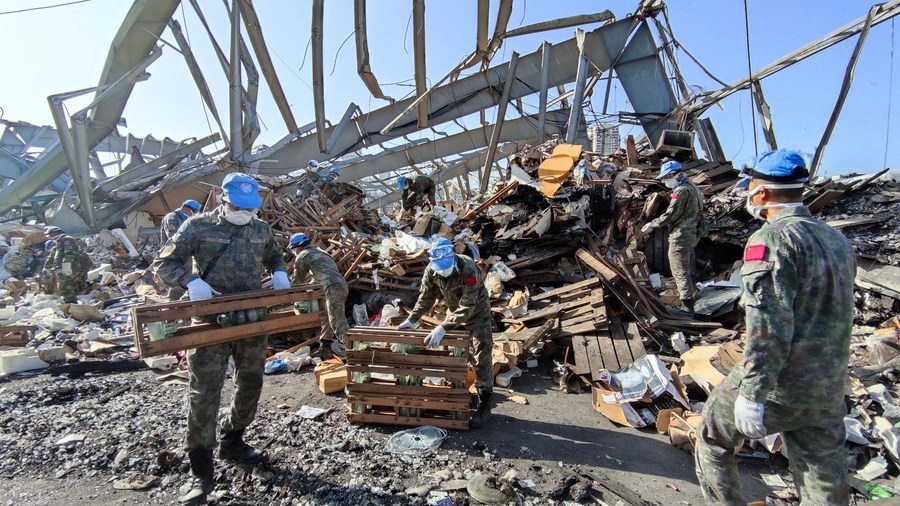 — As the first country to propose the COVID-19 vaccine as a global public good and to advocate global vaccine cooperation, China has provided over 2 billion doses of vaccines to more than 120 countries and organizations by the end of 2021.

— Amid the rise of unilateralism and protectionism, China has been advancing economic globalization with openness as a hallmark and shared prosperity as a vision.

BEIJING, Jan. 16 (Xinhua) — Some 25 km away from Belarus’ capital of Minsk is where the “Great Stone,” a Chinese-Belarusian industrial park, is situated.

Since the two countries signed an agreement on the construction of the park in 2011, it has grown into a modern facility with the operation of more than 80 enterprises from 10-plus countries. Its industrial production maintained an upward trend even amid the COVID-19 pandemic.

That is just one of the many examples of how the vision of building a community with a shared future for mankind proposed by Chinese President Xi Jinping was turned into reality.

Today, in a world affected by combined major changes and a pandemic unseen in a century, the flagship vision not only embodies the common values of mankind and conforms to the trend of the times, but also carries far-reaching influence for the prosperity and progress of mankind.

Xi first presented the concept of a community with a shared future for mankind to the world during his visit to Russia in 2013. Since then, he has expounded the idea on multiple occasions.

During his speech at the UN Office in Geneva in 2017, Xi placed priority on partnership, security, growth, inter-civilization exchanges and a sound ecosystem in building such a community.

“The fact that President Xi Jinping came out with such a vision is to be greeted and saluted because it is a very positive attitude towards the future and towards multilateralism and cooperation” said Jean-Jacques de Dardel, former Swiss ambassador to China who had accompanied Xi during his visit to Switzerland five years ago told Xinhua recently in a virtual interview.

“Today, the concept has developed into a comprehensive system of scientific theories, which constitutes an important part of Xi Jinping Thought on Socialism with Chinese Characteristics for a New Era and Xi Jinping Thought on Diplomacy,” Zhang Qingmin, professor and chair of the Department of Diplomacy at Peking University, said recently.

Through contributing to the global COVID-19 response among others, China has been transforming the concept into action.

As the first country to propose the COVID-19 vaccine as a global public good and to advocate global vaccine cooperation, China has provided over 2 billion doses of vaccines to more than 120 countries and organizations by the end of 2021, demonstrating its sense of responsibility as a major country.

China, alongside more than 30 countries, also launched an Initiative for Belt and Road Partnership on COVID-19 Vaccines Cooperation, to promote the fair distribution of vaccines and enhance vaccine accessibility and affordability in developing countries.

In the COVID-19 pandemic crisis, China set the example of how a major country can lead in the building of a better world for all mankind, said Herman Tiu Laurel, founder of Philippine BRICS Strategic Studies.

Amid the rise of unilateralism and protectionism, China has been advancing economic globalization with openness as a hallmark and shared prosperity as a vision.

As the only major economy to register positive growth in foreign trade in goods in 2020, China has made important contributions to keeping global industrial and supply chains stable and boosting world economic recovery.

Over the years, the China-proposed Belt and Road Initiative (BRI) has become a popular international public product and the world’s largest international cooperation platform, with 141 countries and 32 international organizations having signed relevant cooperation documents with China.

From the China-Pakistan Economic Corridor to China-Laos Railway, from the China-Europe freight train service to the Port of Piraeus, from the Mombasa-Nairobi Railway to the Chinese-Belarusian industrial park, progress has been made in an array of key projects that stretch across continents and brought substantial benefits to local people.

“China has, by far, the most experience in designing and building infrastructure in recent decades and its commitment to work with the developing world is a major step in redressing deep global imbalances,” Robert Lawrence Kuhn, a public intellectual and chairman of the Kuhn Foundation, told Xinhua.

To facilitate more balanced and sustainable post-pandemic global development, China has put forward the Global Development Initiative, which has won the endorsement and support of multiple international organizations including UN agencies and nearly 100 countries.

Besides, the Regional Comprehensive Economic Partnership’s entry into force on Jan. 1, a historic step forward in economic globalization, will allow the region and the whole world to better share China’s development opportunities.

“We must take a people-centered approach and make global development more equitable, effective and inclusive, so that no country will be left behind,” Xi stressed at 16th G20 Leaders’ Summit via video link in October 2021.

Shortly after Xi’s 2017 speech, the concept of building a community with a shared future for mankind was incorporated into a number of UN resolutions.

Committed to a vision of global governance featuring extensive consultation, joint contribution and shared benefits, Xi has called on all countries to uphold the authority and standing of the United Nations, and work together to practice true multilateralism.

Ever since China’s restoration of its lawful seat in the United Nations, “it has championed multilateralism in all aspects and in its dealing with all regions of the world,” said Laurel.

Such multilateral approach has helped China achieve cooperation towards commonly beneficial goals and projects, he added.

A firm believer in honoring its words with actions, China has also been promoting international cooperation against such major threats as climate change and pledged to peak carbon dioxide emissions before 2030 and achieve carbon neutrality before 2060.

It has also announced the launch of a 1.5 billion yuan (233 million dollars) fund to support biodiversity protection in developing countries, a commitment which builds hope for “living in harmony with nature.”

“China has clearly moved from a production and consumption country to an innovation country. President Xi’s global vision of green and low carbon development will complete the progress into a sustainable country. More importantly, the commitment will continue in our efforts to balance humanity with nature,” said Lawrence Loh, director of the Center for Governance and Sustainability at National University of Singapore.