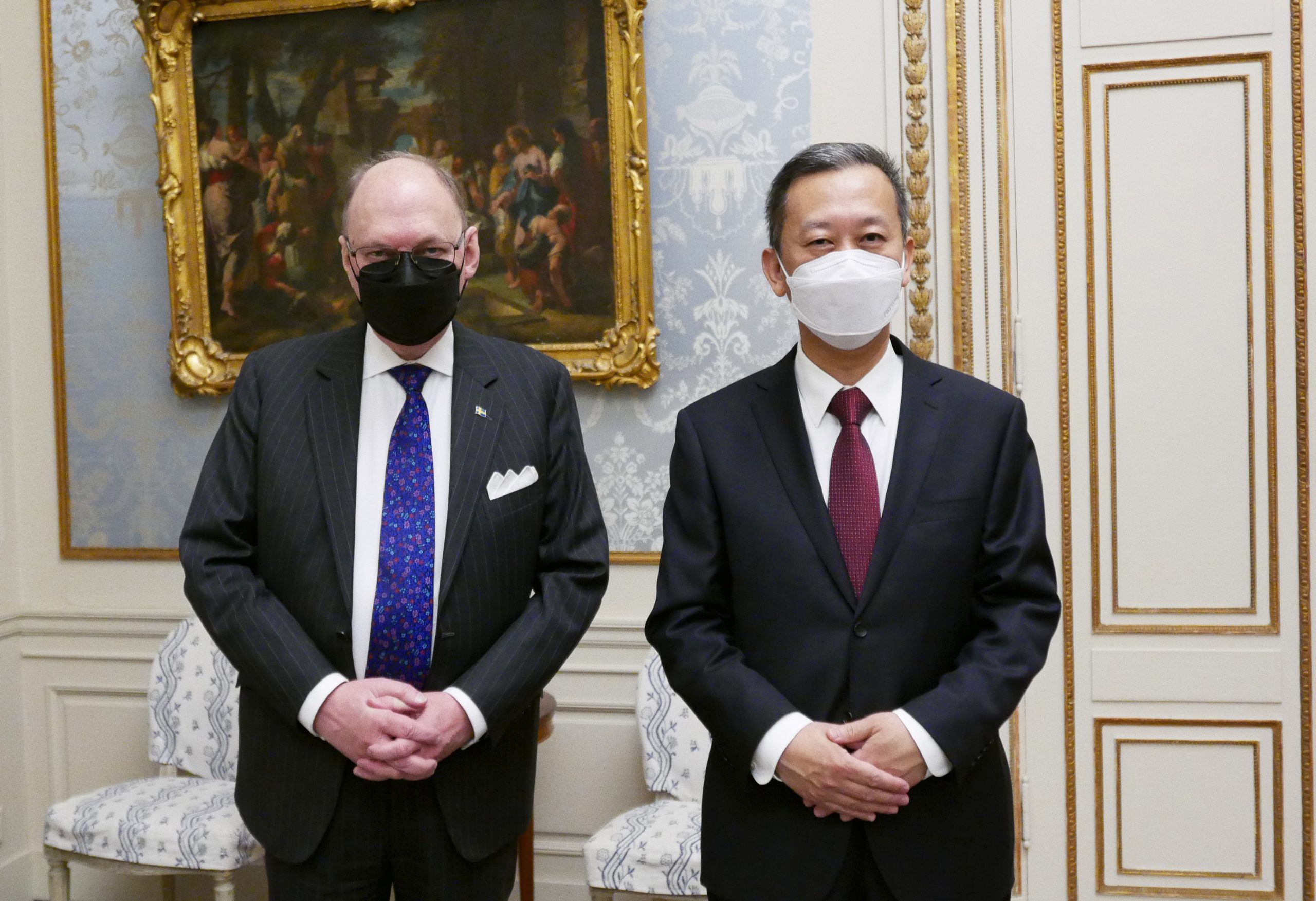 Stockholm, Jan. 26(ChinaEuropeDialogue) — Cui Aimin, Chinese Ambassador to Sweden has met with State Secretary Robert Rydberg at the Ministry for Foreign Affairs of Sweden. Chief of Protocol Maria Lundqvist and relevant diplomats from the Chinese Embassy attended the meeting.

Ambassador Cui said that friendship between China and Sweden is long-lasting. Mutual respect, equality and friendly cooperation is the mainstream of China-Sweden relations. China is willing to work with Sweden to deepen practical and innovative cooperation in areas of business, science, education and culture, to bring benefits to the two countries and peoples. He also wishes great success to the Swedish athletes in the Beijing 2022 Olympics.

State Secretary Rydberg welcomed Ambassador Cui to Sweden, and said that Sweden adheres to the political position of the one-China principle and attaches importance to developing relations with China.

He also said that Sweden is willing to enhance down-to-earth cooperation in various fields with China, especially in addressing climate change, and to promote greater development of Sweden-China relations.

On Jan. 18th, Ambassador Cui Aimin met with Niclas Kvarnström, Head of Asia-Pacific Department of the Ministry for Foreign Affairs of Sweden, at the Conference Center of the Swedish Government.

On Jan.11th, 2022, H.E. Mr. Cui Aimin, Ambassador of China to Sweden presented the copy of Letter of Credence to the Swedish side at the Ministry for Foreign Affairs of Sweden. By special arrangement due to COVID-19, the original Letter of Credence was received by Ms. Maria Lundqvist, Chief of Protocol, to be forwarded to H.M. King Carl XVI Gustaf.

Ambassador Cui said that China and Sweden enjoy a profound friendship, a good foundation for cooperation and similar stances on international issues. Good bilateral relations between China and Sweden are in the fundamental interest of the two countries and peoples, as well as prosperity and progress of the regions and the world. I am committed to working with the Swedish side to actively promote the sound and steady improvement of China-Sweden relations.

Lundqvist welcomed Ambassador Cui to Sweden, and said Sweden is willing to enhance exchanges and cooperation with China, and will provide support for him during his tour of duty.

On the same day, the Swedish Royal Court confirmed that the King had received the Letter of Credence.

Aimin means loving the people in Chinese, a very popular name in China among his generation. Ambassador Cui began with one year work at the Ministry for Foreign Affairs and then went to Ethiopia to work for four years as third secretary between 1986-1990.

During 1990-1993, he worked in Beijing. Then he worked in New York and Los Angles for three times in the United States for a total of 8 years. He worked as Chinese Ambassador to Angola in Africa between 2015 and 2018. Before he came to Sweden, Ambassador Cui worked in the Ministry for Foreign Affairs for three years. He is married and has a son. He also graduated with a Master of Economics.