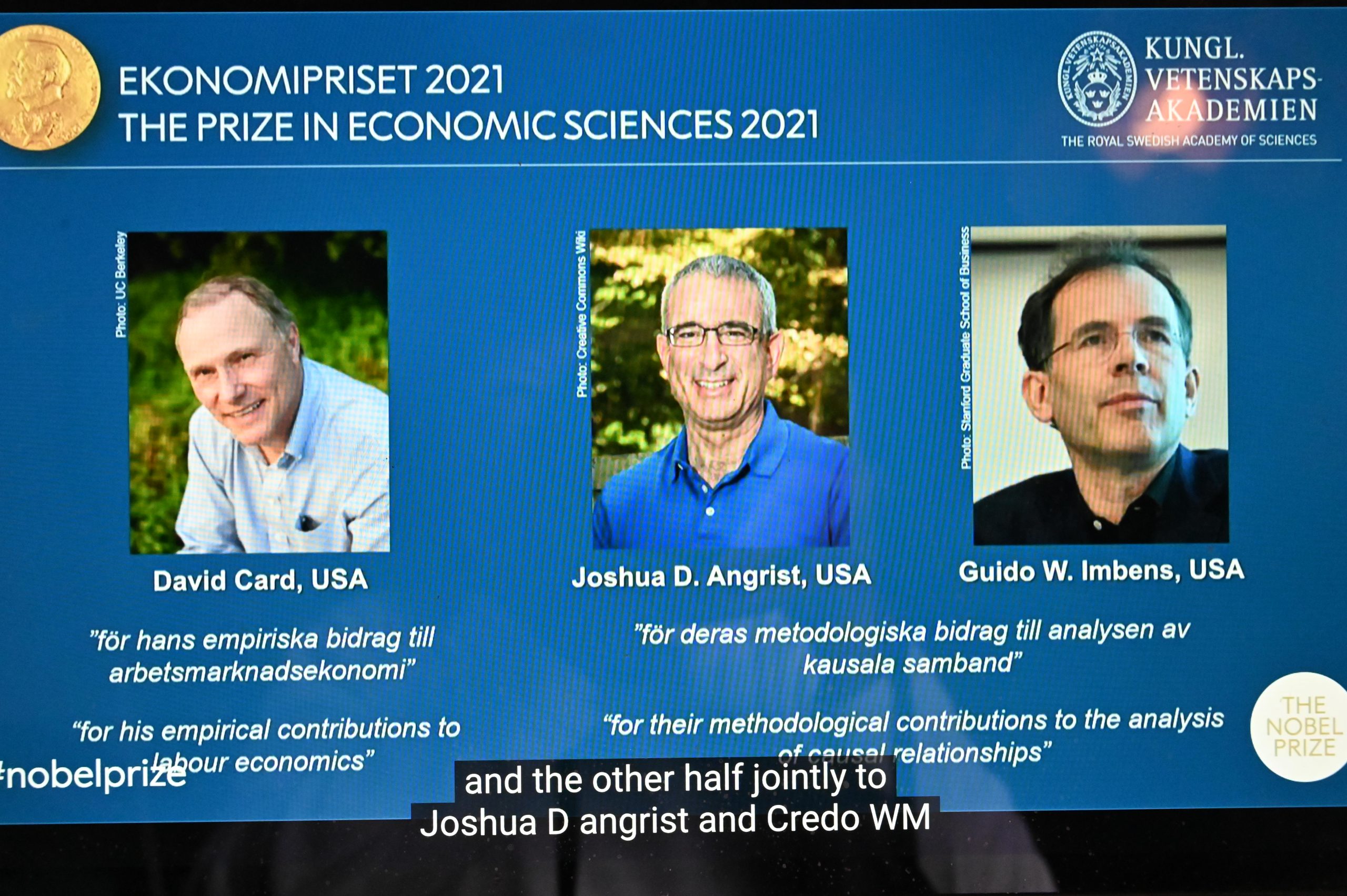 Stockholm, Oct. 11(ChinaEuropeDialogue) —The Royal Swedish Academy of Sciences has decided to award the Sveriges Riksbank Prize in Economic Sciences in Memory of Alfred Nobel 2021

with one half to

“for his empirical contributions to labour economics”

and the other half jointly to

“for their methodological contributions to the analysis of causal relationships”. Goran Hansson, Secretary General of the Royal Swedish Academy of Sciences said at a press conference in Stockholm.

According to a press release, the reason for the prize is that the laureates answered important research questions by natural experiment, that is what had happened.

This year’s Laureates – David Card, Joshua Angrist and Guido Imbens – have provided us with new insights about the labour market and shown what conclusions about cause and effect can be drawn from natural experiments. Their approach has spread to other fields and revolutionised empirical research.

Many of the big questions in the social sciences deal with cause and effect. How does immigration affect pay and employment levels? How does a longer education affect someone’s future income? These questions are difficult to answer because we have nothing to use as a comparison. We do not know what would have happened if there had been less immigration or if that person had not continued studying.

However, this year’s Laureates have shown that it is possible to answer these and similar questions using natural experiments. The key is to use situations in which chance events or policy changes result in groups of people being treated differently, in a way that resembles clinical trials in medicine.

Using natural experiments, David Card has analysed the labour market effects of minimum wages, immigration and education. His studies from the early 1990s challenged conventional wisdom, leading to new analyses and additional insights. The results showed, among other things, that increasing the minimum wage does not necessarily lead to fewer jobs. We now know that the incomes of people who were born in a country can benefit from new immigration, while people who immigrated at an earlier time risk being negatively affected. We have also realised that resources in schools are far more important for students’ future labour market success than was previously thought.

Data from a natural experiment are difficult to interpret, however. For example, extending compulsory education by a year for one group of students (but not another) will not affect everyone in that group in the same way. Some students would have kept studying anyway and, for them, the value of education is often not representative of the entire group. So, is it even possible to draw any conclusions about the effect of an extra year in school? In the mid-1990s, Joshua Angrist and Guido Imbens solved this methodological problem, demonstrating how precise conclusions about cause and effect can be drawn from natural experiments.

“Card’s studies of core questions for society and Angrist and Imbens’ methodological contributions have shown that natural experiments are a rich source of knowledge. Their research has substantially improved our ability to answer key causal questions, which has been of great benefit to society,” says Peter Fredriksson, chair of the Economic Sciences Prize Committee.

The illustrations are free to use for non-commercial purposes. Attribute ”© Johan Jarnestad/The Royal Swedish Academy of Sciences”

Prize amount: 10 million Swedish kronor, with one half to David Card and the other half jointly to Joshua Angrist and Guido Imbens.

In 1968, Sveriges Riksbank (Sweden’s central bank) established the Prize in Economic Sciences in Memory of Alfred Nobel, founder of the Nobel Prize. The Prize is based on a donation received by the Nobel Foundation in 1968 from Sveriges Riksbank on the occasion of the Bank’s 300th anniversary. The first Prize in Economic Sciences was awarded to Ragnar Frisch and Jan Tinbergen in 1969.

The Prize in Economic Sciences is awarded by the Royal Swedish Academy of Sciences, Stockholm, Sweden, according to the same principles as for the Nobel Prizes that have been awarded since 1901.