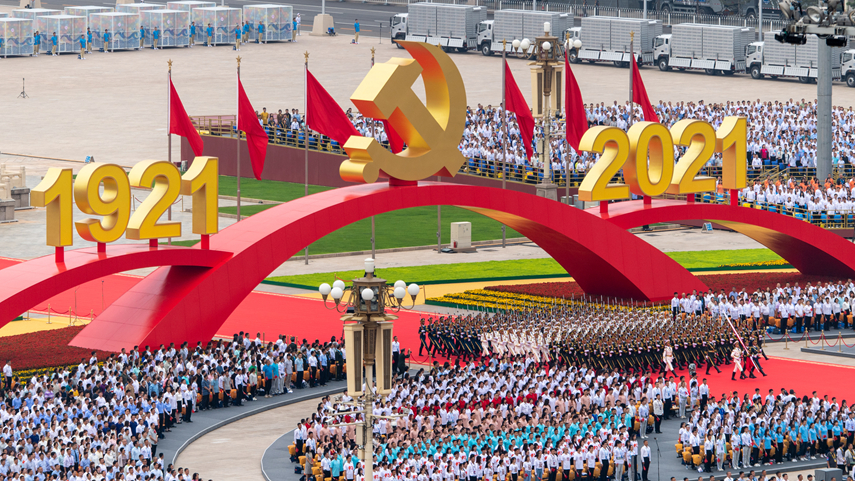 Stockholm, Aug. 18 (ChinaEuropeDialogue) — Looking back on the history of the Communist Party of China (CPC) over the past 100 years, one can see that the Party always has firm support of the Chinese people, which serves as an inexhaustible source of strength for the world’s largest ruling party to overcome all difficulties and forge ahead.

Starting off as a small party of around 50 members, the CPC now has more than 95 million members, becoming the world’s largest political party with tremendous international influence.

Under CPC’s leadership, China has been transformed from a poor and backward country into a vibrant and dynamic economy, the second largest in the world, and people’s lives have seen significant improvement.

President Xi Jinping, also general secretary of the CPC Central Committee, has said that the people are the “supreme and ultimate judge” of the Party’s work.

An Edelman Trust Barometer trust and credibility survey in 2020 showed that the Chinese people’s trust in their government stood at 95 percent, higher than that of other countries surveyed. Harvard University of the United States has revealed similar findings.

So how has the CPC won overwhelming support from 1.4 billion Chinese people?

The people’s support for the CPC comes from its great dedication and governing philosophy of putting people first.

The CPC has in the people its roots, its lifeblood and its source of strength. It works for the people’s interests and has no special interests of its own.

Since the first day of its founding, the Party made seeking happiness for the Chinese people and rejuvenation for the Chinese nation its original aspiration and mission.

The CPC has always been putting people’s well-being in paramount position throughout its history and Chinese Communists are willing to sacrifice everything, including their lives, for the interests of the people.

Data shows that as many as 3.7 million CPC members sacrificed their lives from 1921 to 1949 in striving for the establishment of the people’s republic. Many others died anonymously.

Facing the ravaging pandemic, the CPC gave top priority to protecting people’s life and health even at the cost of short-term economic downturn and a temporary shutdown.

“We are willing to do whatever it takes to protect people’s lives!” Xi emphasized.

Members of the CPC have acted as the vanguard in the battle against the epidemic. Nearly 400 of the over 39 million CPC members and cadres who fought against COVID-19 on the front lines died in the process, according to official numbers.

During China’s massive poverty-alleviation campaign, the Party put forward the “targeted poverty alleviation” strategy and stressed that no one should be left behind on the path to a moderately prosperous society in all respects, or Xiaokang society.

Xi announced that China has achieved the goal of building Xiaokang society when addressing a ceremony celebrating the CPC centenary at Tian’anmen Square on July 1.

China has lifted nearly 800 million people out of poverty over the past four decades, meeting the poverty eradication target in the United Nations’ 2030 Agenda for Sustainable Development 10 years ahead of schedule.

More than 1,800 Party members and cadres died on the front lines of the battle against poverty, which brought home the Party’s fundamental purpose of wholeheartedly serving the people.

The people’s support for the CPC also stems from its strong leadership and performance in the field of governance.

In the early 20th century, after multiple political attempts failed to save the nation at a perilous time of domestic upheaval and foreign aggression, the CPC rose from chaos and led the country toward national independence, changing the fate of Chinese people.

Over the past 100 years, the Party has united and led the Chinese people in achieving great success in the new-democratic revolution, socialist revolution and construction, reform, opening up and socialist modernization, as well as for socialism with Chinese characteristics in the new era.

Under the strong leadership of the CPC, China has created a miracle of rapid economic development and long-term social stability rarely seen in the world.

China now is also the largest recipient of foreign direct investment, and boasts one of the world’s largest consumer markets. Its GDP has exceeded the 100-trillion-yuan threshold.

The CPC has transformed China from a country where almost half of the population had to worry about where their next meal would come from into the world’s second-largest economy, where every life is equally treasured.

From 1949 to 2019, China’s per capital disposable income grew at an average annual rate of 6.1 percent in real terms.

The country has the largest social security system globally, with basic medical insurance covering over 1.3 billion people and basic old-age insurance covering about 1 billion. The average life expectancy of the Chinese has risen to 77.3 years.

Employment is pivotal to people’s wellbeing. The CPC prioritizes employment in economic and social development. It carries out a pro-employment strategy and pursues a more proactive employment policy.

Rather than focusing on short-term results as in the policy fluctuation of election-related cycles in Western countries, the CPC has shown its proficiency in making long-term strategic plans based on the people’s interests, breaking them down into phases, and translating a blueprint into reality with force and tenacity.

China has formulated and implemented 13 five-year plans since 1953 and the country has already entered the 14th Five-Year Plan period (2021-2025).

Having met the goal of poverty elimination, the Party continues to work to reduce the gap between the rich and the poor, to work for people’s well-rounded development and common prosperity and a better life for all.

Over the past 70-plus years, the CPC has led the people in developing socialist democracy, which enables the people to participate in the whole process of political affairs and efficiently solve the problems that concern the people.

China’s whole-process democracy involves more than just a matter of voting, rather, it ensures the people’s rights to democratic elections, consultations, decision-making, management and oversight, covering all aspects of state affairs and social activities.

Preventing internal rifts and the waste of resources due to “endless discussion without decision, and decision without implementation” seen in western democracy, Chinese democracy ensures that once a major decision is made, the Party is able to pool resources across the country for great undertakings, which is exemplified in everyday governance or emergency responses, to name a few like earthquake rescue, the fight against epidemics, poverty relief.

The people’s support for the CPC originates from its self-improvement and self-reform as well.

During the past 100 years, the CPC has continued to adapt the basic tenets of Marxism to the Chinese context, and make theoretical innovations, thus maintaining its full vitality.

The Party practices effective self-supervision. From intraparty political education to criticism and self-criticism, deviations and mistakes in thinking are corrected in time.

“To forge iron, one must be strong.” In the long history of leading the Chinese revolution, construction and reform, the CPC has a fine tradition of learning and education among party members to keep pace with the times, strengthen political beliefs and improve governing capacity and better serve the people.

Moreover, the Party has combined internal supervision with state and public scrutiny.

The Party sees corruption as the “greatest threat” to its survival and its relationship with the Chinese people.

Since the 18th CPC National Congress, the Party has investigated and punished corrupt officials, including some high-ranking officials, on a scale unseen in decades.

The resolute fight against corruption has resulted in surging public support. According to a survey conducted by the National Bureau of Statistics, 97.3 percent of the respondents expressed satisfaction with the improvement of Party conduct, the working practices of government officials, and social morality.

Throughout century-long process of overcoming hardships and securing brilliant achievements, the Chinese people and the CPC have helped each other through thick and thin, forming a closely bonded relationship, which is often described as being inseparable as fish and water, flesh and blood.

However, over the years, western anti-China forces have attempted to sow discord between the CPC and the people and attack China’s human rights record by fabricating lies and rumors with the intention to disintegrate China from within and contain its development.

Their ulterior motives, out of ideological bias and geopolitical reasons, reveal the ignorance about the century-old CPC and solidarity between the Party and people, thus being doomed to failure.