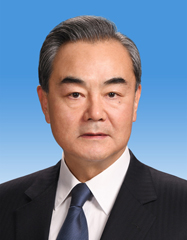 He made the remarks during his telephone conversation with Josep Borrell, the high representative of the EU for foreign affairs and security policy.

Noting that the pandemic is still festering all over the world and the evolution of the international situation is accelerating, Wang said China and the EU, two stabilizing forces in the process of multi-polarization, need to strengthen communication and dialogue, continuously enhance mutual trust and eliminate all kinds of distraction.

He said the two sides should first of all handle their respective domestic affairs well, and at the same time strengthen strategic cooperation and play a constructive role in dealing with global challenges, adding that the two sides should maintain the right direction of China-EU relations, stick to peaceful coexistence, open cooperation, multilateralism as well as dialogue and consultation, which are not only important experience gained over the 45 years since the establishment of bilateral diplomatic ties, but also key principles for the healthy and stable development of China-EU comprehensive strategic partnership in the future.

China is willing to maintain close communication with the EU side on the important agenda for the next stage, work harder to push forward and reach the China-EU investment treaty, strengthen coordination and cooperation on climate change and biodiversity conservation so as to provide an institutional framework and sound expectations for bilateral cooperation in key areas, he said.

The EU’s upholding strategic autonomy not only serves the fundamental and long-term interests of Europe, but also meets the common expectations of the international community, Wang said, adding that strategic autonomy is a necessary character for staying independent as a polar of the world.

The Chinese side hopes that EU’s strategic autonomy can also embody the formulation and implementation of the correct policies towards China, said Wang, adding that relations among major countries should not be an either-or decision, much less a zero-sum game.

Wang said that the Chinese side has maintained highly stable and continuous policies towards the EU, always treats Europe in an optimistic and positive light, and views the bloc as an important partner as well as a diplomatic priority, adding that China hopes that the EU side can establish a cooperation-oriented framework for its policies towards China, and develop more positive EU-China relations.

For his part, Borrell said the EU appreciates China’s climate target to reach CO2 emissions peak before 2030 and achieve carbon neutrality before 2060, which provides a model for the whole world, adding that the EU is ready to strengthen cooperation with China on climate change and biodiversity conservation in an all-round way, and to push forward the negotiation of the EU-China investment treaty and strive for conclusion within the year.

The EU side thinks highly of China’s tremendous development achievements and its important contribution to world peace and prosperity, he said, adding that the EU will take an objective and rational view of China’s development and adopt an independent policy towards China based on EU’s own interests.

Despite the fact that the EU and China are different in political systems, as well as in historical and cultural backgrounds, the EU side is ready to carry out effective cooperation with China in the spirit of mutual respect, and jointly tackle global challenges so as to add more elements of balancing and predictability to the World, he added.