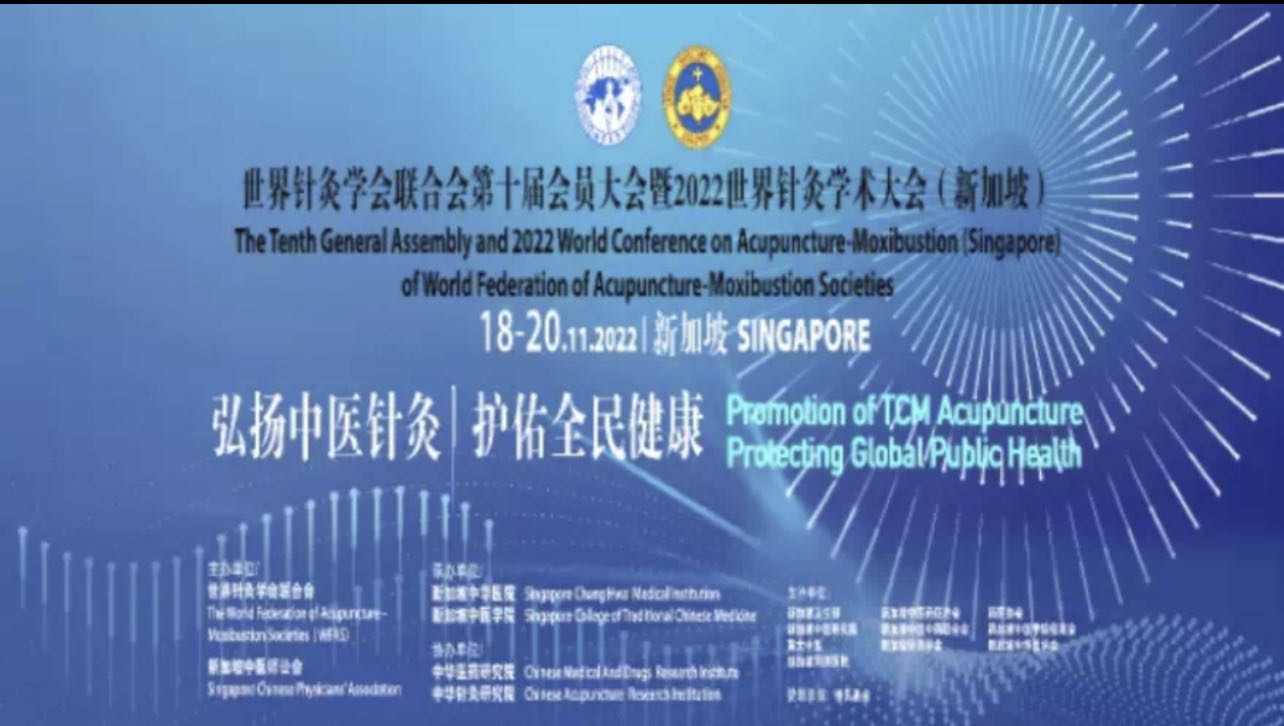 Stockholm, Nov. 21(CED) — The 10th General Assembly of the World Federation of Acupuncture and Moxibustion Societies and the 2022 World Acupuncture Academic Conference were successfully held at the Raffles City Convention and Exhibition Center in Singapore and online around the world during November 18-21, 2022. 2025 World Conference of WFAMS will be held in Sweden.

Last Friday on November 18, the 10th General Assembly of the World Federation of Acupuncture and Moxibustion Societies(WFAMS) successfully opened in Singapore. The meeting was chaired by Liu Baoyan, President of the WFA&MS, and 230 representatives and observers from more than 40 countries and regions participated in the meeting either on site or online.

Vice Chairman Yang Chungui presented a work proposal report at the “World Federation of Acupuncture and Moxibustion Societies World Acupuncture Academic Conference”.
This is the top international academic conference on TCM acupuncture held by the WFA&MS, and a general meeting will be held every 5 years, which is the world’s most influential academic activity in the field of TCM acupuncture.

Chairman Liu Baoyan also made a presentation on “Thoughts and Actions on Promoting the High-quality Development of Acupuncture and Moxibustion”.

Ms. Sun Haiyan, her excellency Ambassador of the People’s Republic of China to Singapore, also spoke at the opening of the conference.

Vice Chairman Yang Chungui submitted the report of “Clinical Research on High-frequency Electromagnetic Field Acupuncture” to the conference, and the organizing committee arranged time for him to present his report.

This has been the first time since the COVID-19 epidemic that the WFAMS has held a combination of online and offline meetings outside China, and successfully carried out the election of international organisations in an innovative form. The work report and financial work report of the ninth executive committee of the WFAMS were examined and adopted, and gave a guideline for the next five year development of the organisation.

World Congress of WFAMS 2025 will be held in Sweden

Vice Chairman Yang Chungui made a report on behalf of the Acupuncture Science Association Sweden at the conference for the bid to host the World Congress of WFAMS in Stockholm in 2025. The bid was finally approved by the conference.

“We, the Acupuncture Science Association Sweden, will unite all those who support TCM in Sweden to make the 2025 World Congress of WFAMS a united and innovative congress together with the Acupuncture and Moxibustion Secretariat of the Swedish Association of Traditional Chinese Medicine. ” said Vice Chairman Yang after winning the bid.

The ariticle is provided by the Secretariat of Acupuncture Science Association Sweden.