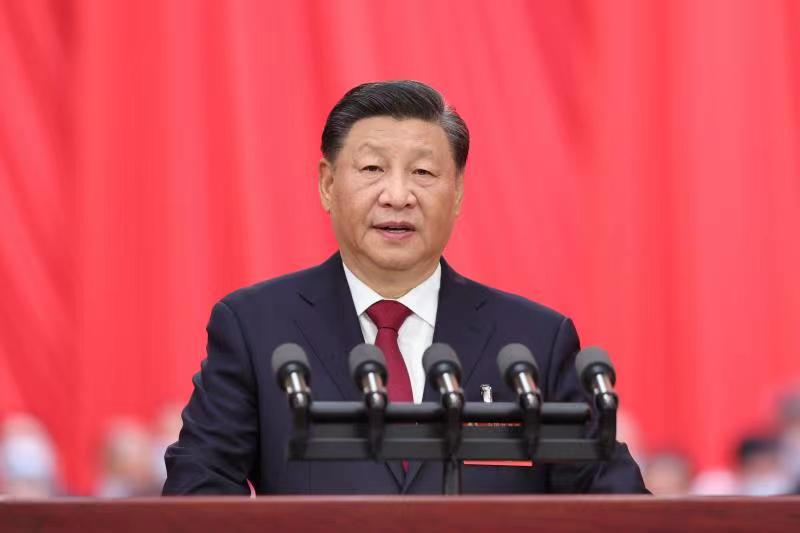 BEIJING, Oct. 19 (CED) — Chinese modernization, a key term defining China’s journey to rejuvenation, has for the first time been written into a report to the national congress of the Communist Party of China (CPC), the world’s largest Marxist governing party.

In his Sunday report to the 20th CPC National Congress, Xi Jinping, general secretary of the CPC Central Committee, underscored the “central task” of the Party, calling for efforts to advance the rejuvenation of the Chinese nation on all fronts “through a Chinese path to modernization.”

The Chinese have never been so close to, confident in, and capable of achieving the goal of rejuvenating the Chinese nation, according to the report, which laid out main objectives and tasks for the next five years and beyond.

Chinese modernization, based on exploration by generations of Chinese people and unique to the country’s context, presents a correct path to realizing the Chinese dream. It also offers humanity a new choice for achieving modernization.

When the Japanese invasion plunged China into peril in the 1930s, a renowned Chinese historian pondered and raised a question that had long perplexed him and his compatriots: Can the Chinese modernize?

Today the answer is readily apparent to everyone. The world’s second-largest economy has achieved within decades what took the West centuries to achieve.

According to its two-step strategic plan, the CPC will next lead China to “basically realize socialist modernization from 2020 through 2035,” and “build China into a great modern socialist country that is prosperous, strong, democratic, culturally advanced, harmonious, and beautiful from 2035 through the middle of this century.”

“As China has embarked on a new journey, it is the perfect time to set out clear direction and targets of Chinese modernization so that the Chinese people can unite in pursuit of the goal they have been seeking to achieve,” Chen Shuguang, a professor at the Party School of the CPC Central Committee, told Xinhua.

The report outlined China’s overall development objectives for the year 2035, which include substantially growing the per capita GDP to be on par with that of a mid-level developed country, significantly enhancing national soft power, steadily lowering carbon emissions after reaching a peak, as well as comprehensively strengthening the national security system and capabilities.

Describing the next five years as “crucial for getting our efforts to build a modern socialist country in all respects off to a good start,” the report listed the main objectives and tasks for this period, which range from achieving greater self-reliance and strength in science and technology, to further improving the socialist market economy, and enabling China to play a greater role in global governance.

“Setting clearer vision and targets, China is becoming increasingly aware that the modernization it seeks will not be a mere replica of the Western one since the Chinese path works well,” said Chen.

Xi said Chinese modernization is the modernization of a huge population, of common prosperity for all, of material and cultural-ethical advancement, of harmony between humanity and nature, and of peaceful development.

Experts believe that although modernization theory has its origins in the West, modernization by no means is equal to Westernization and there has never been a one-size-fits-all approach to modernization.

“China is underscoring the importance of every country pursuing modernization through a path that is suited to their own conditions and that their people will accept and support,” said Sean Slattery, one of the foreign experts invited to translate Xi Jinping’s report to the CPC national congress.

Gao Derong, a delegate to the CPC national congress from the rural areas of southwest China’s Yunnan Province, told Xinhua that he was impressed by the unique Chinese path to modernization.

“China’s success in mass poverty alleviation over the past years has highlighted one of the key features of Chinese modernization, which is common prosperity,” he said. “Our modernization benefits everyone in the country instead of just a few.”

China’s modernization drive came into the spotlight as profound changes unseen in a century are transforming the world, which has once again reached a crossroads in history.

Although the modernization of the West has created unprecedented material wealth, its path of aggression, colonization and expansion is not viable. This path has also led to problems including a widening wealth gap, waste of resources and environmental damage.

“For other developing countries, Chinese modernization offers a new choice for achieving modernization, based on their own conditions and more international cooperation, rather than plunder, war and blood,” said Yahia Mustafa, who participated in polishing the Arabic version of the report. The 65-year-old Sudanese expert has lived in China for over 20 years.

The CPC is clear-minded that building a modern socialist country in all respects is a massive, arduous task.

Warning of various “black swan” and “gray rhino” events that may occur at any time, the report said China has entered a period of development in which strategic opportunities, risks and challenges are concurrent, and uncertainties and unforeseen factors are rising.

“Tremendous hard work and unrelenting efforts are required as China strives to realize modernization,” said Li Lannyu, a worker from east China’s Jiangsu Province who is also a delegate to the congress.

Xin Ming, a professor at the Party School of the CPC Central Committee, said building a modern socialist country is a great cause that requires strenuous efforts. “While the future is bright, we still have a long way to go.”