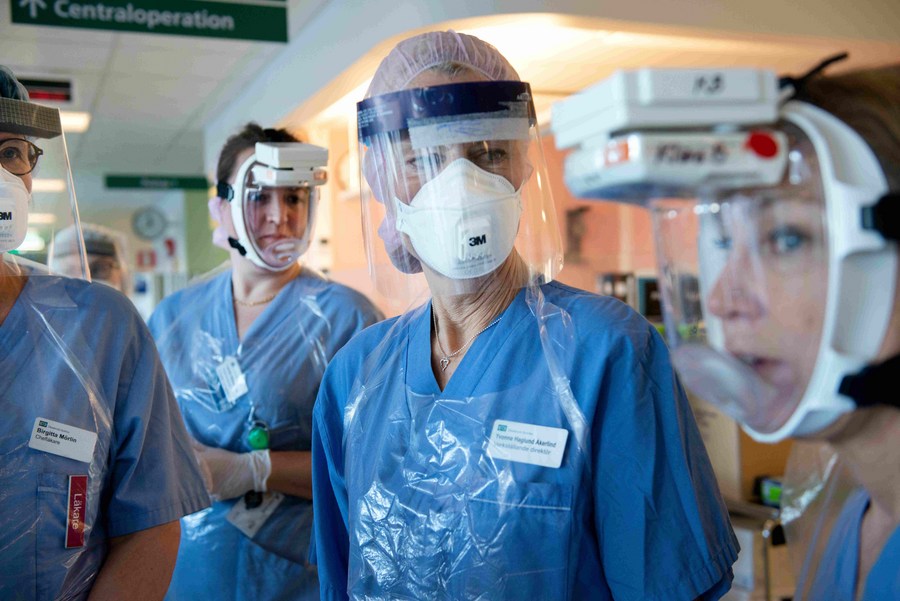 STOCKHOLM, Jan. 26 (ChinaEuropeDialogue CED) — “Our patients were extremely ill, the ventilator hoses and the monitoring equipment were all over the place … I was really shocked,” recalled Fibi Chahrestan, a medical student and assistant nurse, who works to save lives at Danderyd Hospital’s intensive care unit (ICU) here.

Despite having helped treat COVID-19 patients in the early days of the pandemic, the then 22-year-old did not fully grasp the severity of the disease until she first set foot in the ICU, where patients struggled for every gasp of air.

“It was not until then that I realized how ill COVID-19 patients could become,” Chahrestan told Xinhua about the experience, shocking even to a seasoned medical worker.

That was the summer of 2021, and by then she had already worked with COVID-19 patients for more than a year.

She first witnessed the death of a COVID-19 patient when she worked as an assistant nurse at Sodersjukhuset, one of the largest hospitals in the Swedish capital, in March 2020. During that month alone, the number of confirmed infections in the country surged from just 14 to almost 5,000. And at the time not much was known about the virus.

Faced with a rapidly worsening situation, the hospital’s staff had to comply with strict hygiene and safety protocols, which were updated almost every day. COVID-19 testing kits and basic personal protective equipment, such as disposable plastic aprons, were in such short supply that hospitals were forced to make their own protective gear, Chahrestan recalled.

Later that year, when the cumulative number of confirmed infections had surpassed 40,000, Chahrestan witnessed a steady influx of COVID-19 patients to the emergency department of the same hospital.

“The emergency department is usually crowded, but the virus made it even worse. It was extremely stressful,” she said, adding that the routines were regularly tweaked to ensure that the latest scientific evidence-based techniques were used to minimize the risk of transmission.

Sweden has adopted a light-touch approach to the pandemic since the very first days, preferring recommendations to the public to a nationwide lockdown. Meanwhile, the successive waves of the pandemic took the heaviest toll in Sweden of all five Nordic countries, creating an extremely stressful work environment for its medical workers.

According to a recent survey conducted by the Karolinska Institutet, 20 percent of Sweden’s young doctors reported symptoms of fatigue, and more than half of them said they had crossed the threshold for chronic fatigue syndrome. The survey also found that numerous senior physicians were also affected, albeit to a lesser degree.

To make matters worse, many medical professionals have also been infected with COVID-19 themselves. Chahrestan was one of them.

“I fell ill with COVID-19 almost immediately after I started working at Danderyd Hospital. I had an extreme headache, fever and chills, a runny nose and I lost my sense of smell,” she said.

Chahrestan does not know where she became infected, as the virus was present everywhere and the number of confirmed infections surpassed one million that summer.

Already in April 2020, just a few months into the pandemic, about one in five of the 500-odd tested staff members at Danderyd Hospital were found to have antibodies. The proportion was even higher among those who had worked with COVID-19 patients, suggesting that medical staff risked getting infected at work.

In its second interim report released in November last year, the Swedish Corona Commission concluded that the country’s handling of the pandemic had been “marked by lateness” and that the “initial protection measures were insufficient to stop or even sharply limit the spread of infection in the country.”

The report described Sweden’s pandemic preparedness as “substandard”, and that “the lack of protective equipment during the pandemic’s first wave in the spring of 2020 became so acute that staff — especially in the municipalities — occasionally had to work without adequate equipment.”

After about a week, the worst of Chahrestan’s symptoms had gone, but it took longer for her to regain her sense of smell. Once in the clear, she went back to work at the ICU, where she did eight-hour shifts. “But the workload was high and doctors worked a lot overtime,” she said.

Some of the restrictions imposed by the authorities — for instance the early closing times for restaurants or the caps on the number of people allowed to attend events — were criticized by the public and by the affected businesses for being confusing or unclear.

While acknowledging that the authorities’ approach suited the Swedish mindset, Chahrestan felt that this strategy did not always have the desired effect.

“Some people followed the recommendations, while others did not. For example, people were partying a lot. Although they did not always break the law, what they did was not morally right,” she explained.

A recent survey showed that 45 percent of the respondents supported the restrictions in force. However, 25 percent considered these restrictions too harsh, while another 25 percent said they were too weak.

Early on in the pandemic, several countries encouraged the use of face masks. However, the Swedish Public Health Agency said that the masks could do more harm than good and could give a false sense of security. They also feared that face masks would contribute to transmission unless worn properly.

However, in December 2020, the Public Health Agency did a 180-degree turn, suddenly urging the general public to wear face masks on public transport during rush hour.

By then, the message that masks could do more harm than good sank in with many Swedes, who consequently ignored the new advice. In Chahrestan’s recollection, most people did not use face masks at the time.

“I do understand that it may be hard to grasp the potentially fatal consequences unless one has worked in a hospital,” she said.

The strongest and most persistent message sent by the Swedish authorities to the general public has been that the vaccines are effective. By Jan. 26, 86.6 percent of the population aged 12 and over had received at least one vaccine dose, 83.5 percent had had two doses, and 44.3 percent of those aged 18 and older had received three doses.

Chahrestan said that one of her main concerns was that vaccination coverage was uneven globally, and the problem was more severe in the low-income countries.

“This poses a risk not only to individuals in those countries but to people all over the world. By helping other countries, one can also help oneself,” she said. Enditem