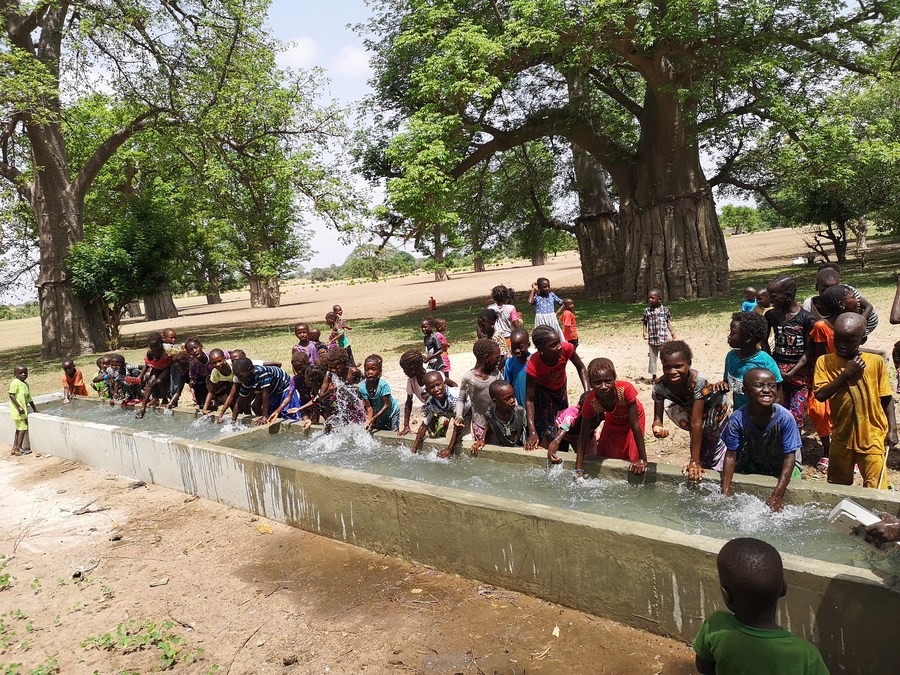 DAKAR, Dec. 2 (Xinhua) — On a dry hot morning in late November, Mbake Diom, a villager from the Khodjil Baling Village in the West African nation Senegal, started his day with the routine work of drawing water from a newly-drilled well in his village.

Diom, an employee of the Chinese construction company CGCOC Group Senegal Branch that has completed the well project, has been responsible for maintaining the Chinese-aided well that becomes an important source of water for villagers.

While busy checking the machine’s functions and filling the engine with diesel, the villager said the well, part of the Chinese-funded rural well-drilling project in Senegal, has brought significant changes to local people’s lives.

Senegal, close to the Sahara Desert, has a long dry season. The central and eastern parts of the country are mostly semi-desert regions. During the dry season, the temperatures could soar to almost 45 degrees Celsius. In such harsh conditions, local water supply equipment is easily dilapidated. In villages far from cities, residents often cannot get easy access to clean and safe water.

Children play beside a China-aided well in a village of Senegal, July 15, 2019. (Xinhua)

Khodjil Baling Village used to be one such place afflicted wth a severe lack of water. According to Diom, the village used to have only one well and residents had to wait in long queues to fetch water — starting from dawn up until midnight.

“Before the water supply project was completed, I had to get up at 3 to 4 in the morning to find water. I had to walk over two kilometers to reach the old well,” said Khemesse Faye, a local villager.

“We had to get to the well very early for there was always a long line. And consequently, many youngsters had dropped out of school,” said Demba Tine, another villager.

Their lives have turned for the better since Sept. 20, 2018, a big and special day for Khodjil Baling Village as residents witnessed the completion of the new China-aided well. This well was part of a rural well-drilling project, consisting of 251 wells and 1,800 km water pipelines that China had pledged to fund in Senegal, benefiting one-seventh of Senegal’s population.

In Senegal, the rural well-drilling project officially began on March 5, 2017, bringing hope to millions of locals struggling with water shortages. The project was also part of the outcomes of the Johannesburg Summit of the Forum on China-Africa Cooperation held in 2015.

The project covers 12 of the 14 regions of Senegal, and each water supply system of the project consists of wells, water towers, pipes and distribution facilities with a maximum daily supply capacity of 80,000 cubic meters. The project also created jobs for more than 3,000 local people, including Diom.

In March, the whole project was handed over to the Senegalese government.

“The projects reflect our solidarity and cooperation (with China). We talked about hospitals, clinics and the rural well-drilling project,” said Senegalese Foreign Minister Aissata Tall Sall.

The implementation of these projects had run into numerous difficulties, and yet Chinese engineers and local workers braved the challenges. Diom revealed that workers sometimes had to spend more than a week to find a proper location for drilling. “Transportation is also one of the main challenges we faced. During the rain season, drilling was very difficult because there were no decent roads here,” he said.

“In March 2021, the water supply project was completely handed over to the Senegalese government. The villagers now have access to clean and sufficient drinking water. And the water for the crops and the livestock can also be guaranteed,” said Wang Wei, who is in charge of CGCOC Senegal Branch.