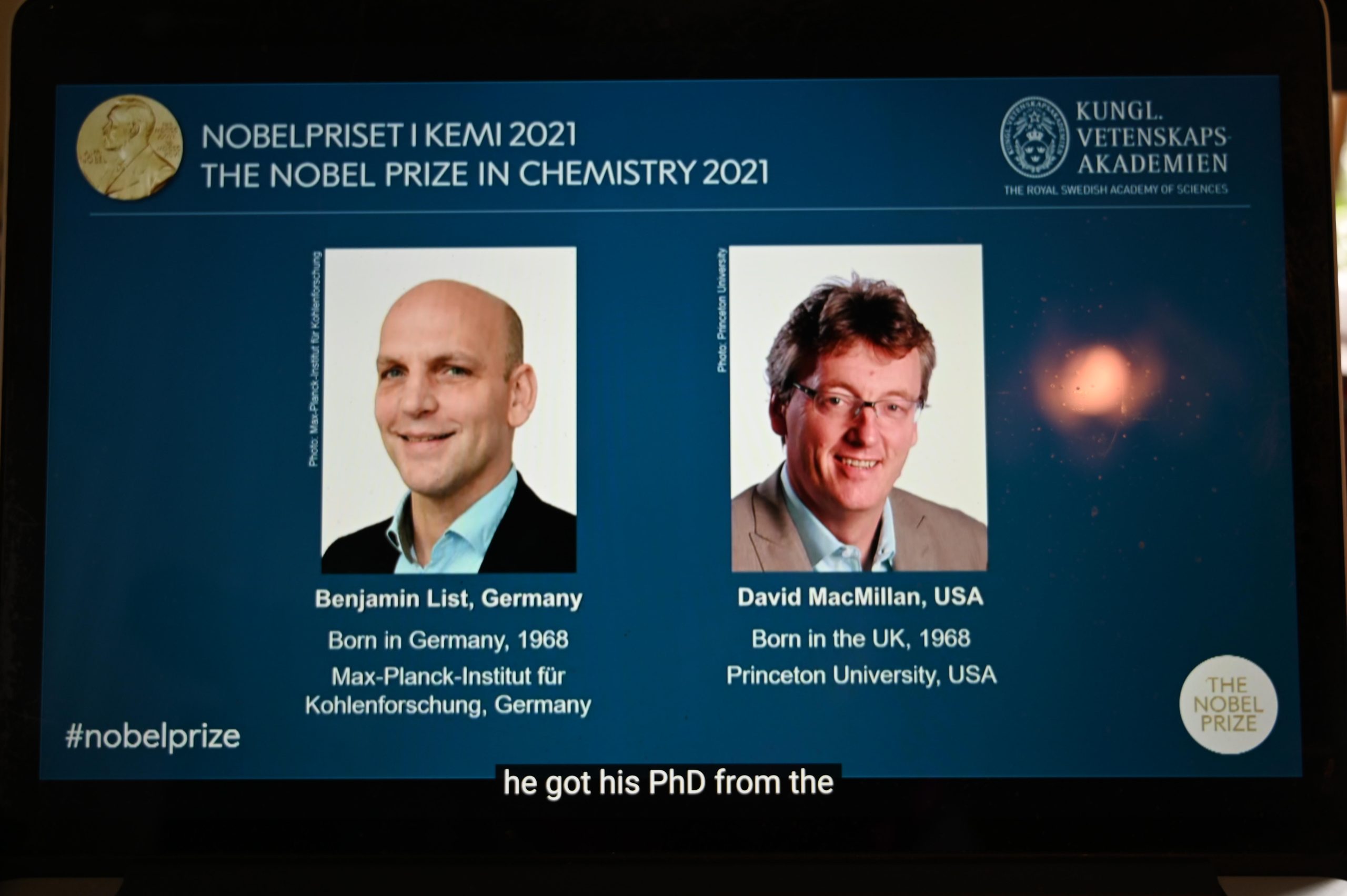 Stockholm, Oct. 6(CED) — Benjamin List and David MacMillan have been awarded the Nobel Prize in Chemistry 2021 for their development of a precise new tool for molecular construction: organocatalysis. This has had a great impact on pharmaceutical research and has made chemistry greener.

Goran Hansson, Permanent Secretary of the Royal Swedish Academy of Sciences made this announcement in Swedish, English, French and German and Spanish.

“The Royal Swedish Academy of Sciences has decided to award the Nobel Prize in Chemistry 2021 to Benjamin List, Max-Planck-Institut für Kohlenforschung, Mülheim an der Ruhr, Germany and
David W.C. MacMillan, Princeton University, USA
“for the development of asymmetric organocatalysis”.

Professor Pernilla Wittung, said the prize is about making the chemical molecules and the laureates developed a truely elegant tool for it. Before 2000 there were only two kinds of catalysts, one is enzyms and the other is metal complexis. After 2000, List and MacMillan independently made their research and developed organic catalysis which is precise, cheap, fast and environmental friendly. The discoveries have initiated a totally new way of thinking over how to put together chemical molecules. This tool has been widely used in today’s drug industry and in fine chemical production. It has already benefitted mankind greatly.

Many research areas and industries are dependent on chemists’ ability to construct molecules that can form elastic and durable materials, store energy in batteries or inhibit the progression of diseases. This work requires catalysts, which are substances that control and accelerate chemical reactions, without becoming part of the final product. For example, catalysts in cars transform toxic substances in exhaust fumes to harmless molecules. Our bodies also contain thousands of catalysts in the form of enzymes, which chisel out the molecules necessary for life.
Catalysts are thus fundamental tools for chemists, but researchers long believed that there were, in principle, just two types of catalysts available: metals and enzymes.

Benjamin List and David MacMillan are awarded the Nobel Prize in Chemistry 2021 because in 2000 they, independent of each other, developed a third type of catalysis. It is called asymmetric organocatalysis and builds upon small organic molecules.

“This concept for catalysis is as simple as it is ingenious, and the fact is that many people have wondered why we didn’t think of it earlier,” says Johan Åqvist, who is chair of the Nobel Committee for Chemistry.
Organic catalysts have a stable framework of carbon atoms, to which more active chemical groups can attach. These often contain common elements such as oxygen, nitrogen, sulphur or phosphorus. This means that these catalysts are both environmentally friendly and cheap to produce.
The rapid expansion in the use of organic catalysts is primarily due to their ability to drive asymmetric catalysis. When molecules are being built, situations often occur where two different molecules can form, which – just like our hands – are each other’s mirror image. Chemists will often only want one of these, particularly when producing pharmaceuticals.
Organocatalysis has developed at an astounding speed since 2000.

Benjamin List and David MacMillan remain leaders in the field, and have shown that organic catalysts can be used to drive multitudes of chemical reactions. Using these reactions, researchers can now more efficiently construct anything from new pharmaceuticals to molecules that can capture light in solar cells. In this way, organocatalysts are bringing the greatest benefit to humankind.

They will equally share the 10 million Swedish kronor Prize and got their award on December 10th. This year there will be no ceremony or banquet with the King in Stockholm due to the Covid-19.

List is the second laureate for this year from the Max-Planck-institut in Germany. Both laureates were born in 1968 which marked an important year in Europe.

List expressed his happiness when he was interviewed during the press conference over the phone. He was having holiday with his wife and children in Denmark now.

He said he felt very happy about it and he didn’t really expect the news even though they have been joking about it.

He said he felt it was an important discovery when he first found it in 2000, but he didn’t expect he could win Nobel Prize at that time.

He praised his institute for the freedom he got and said he loved to do things impossible. So maybe he will use the prize money to do more research according to his own will. They gave him more freedom in research and he is really thankful for the prize.