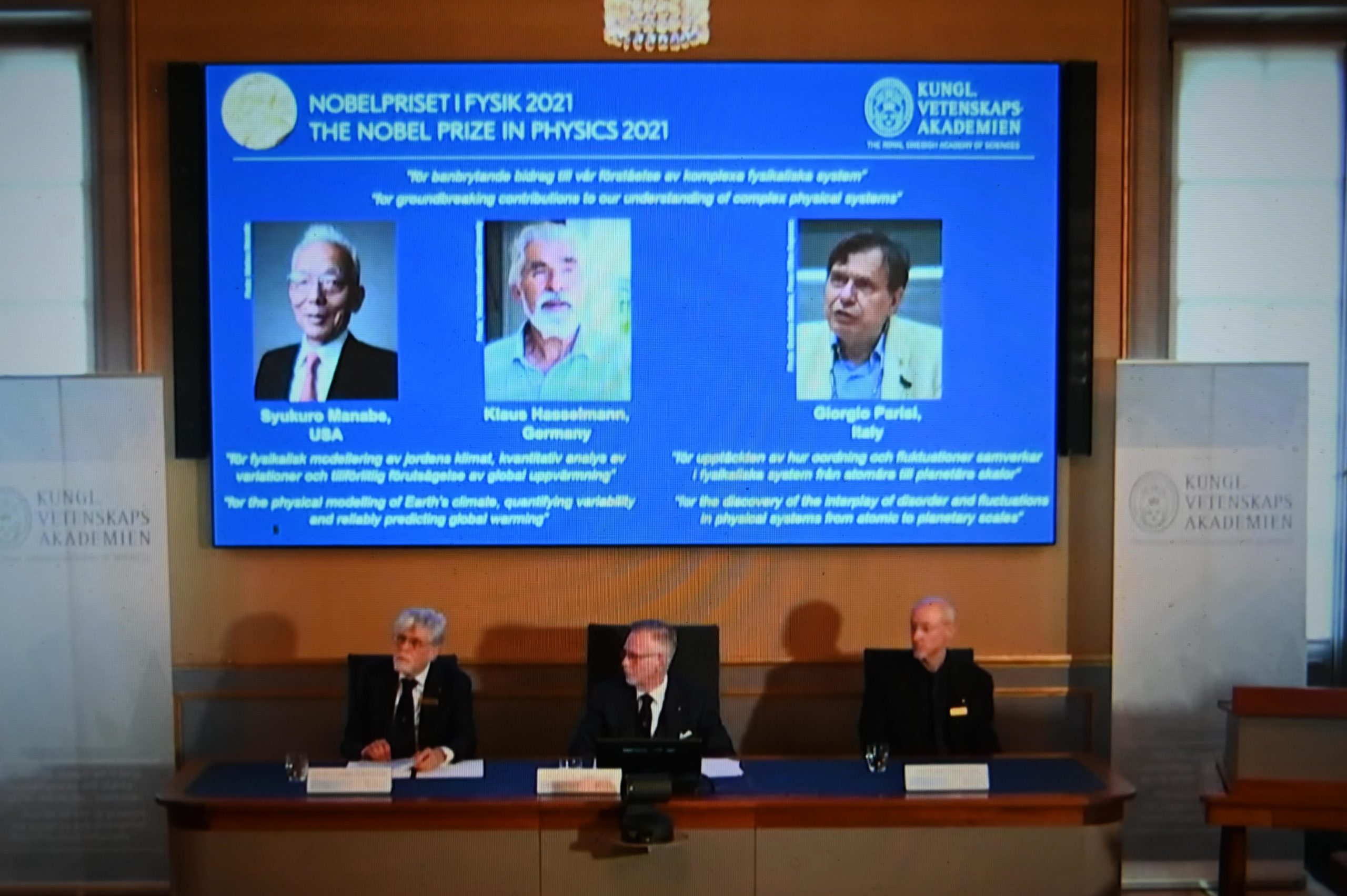 “The Royal Swedish Academy of Sciences has decided to award the Nobel Prize in Physics 2021 “for groundbreaking contributions to our understanding of complex physical systems”
with one half jointly to Syukuro Manabe, Princeton University, USA and Klaus Hasselmann, Max Planck Institute for Meteorology, Hamburg, Germany “for the physical modelling of Earth’s climate, quantifying variability and reliably predicting global warming”
and the other half to Giorgio Parisi, Sapienza University of Rome, Italy
“for the discovery of the interplay of disorder and fluctuations in physical systems from atomic to planetary scales”.

Goran Hansson made the announcement at a press conference on Oct. 5 at the Academy in Stockholm.

Syukuro Manabe and Klaus Hasselmann laid the foundation of our knowledge of the Earth’s climate and how humanity influences it. Giorgio Parisi is rewarded for his revolutionary contributions to the theory of disordered materials and random processes, according to Secretary General of the Royal Swedish Academy of Sciences, Goran Hansson.

Complex systems are characterised by randomness and disorder and are difficult to understand. This year’s Prize recognises new methods for describing them and predicting their long-term behaviour.
One complex system of vital importance to humankind is Earth’s climate.

Syukuro Manabe demonstrated how increased levels of carbon dioxide in the atmosphere lead to increased temperatures at the surface of the Earth. In the 1960s, he led the development of physical models of the Earth’s climate and was the first person to explore the interaction between radiation balance and the vertical transport of air masses. His work laid the foundation for the development of current climate models.

About ten years later, Klaus Hasselmann created a model that links together weather and climate, thus answering the question of why climate models can be reliable despite weather being changeable and chaotic. He also developed methods for identifying specific signals, fingerprints, that both natural phenomena and human activities imprint in the climate. His methods have been used to prove that the increased temperature in the atmosphere is due to human emissions of carbon dioxide.

Around 1980, Giorgio Parisi discovered hidden patterns in disordered complex materials. His discoveries are among the most important contributions to the theory of complex systems. They make it possible to understand and describe many different and apparently entirely random materials and phenomena, not only in physics but also in other very different areas, such as mathematics, biology, neuroscience and machine learning.

“The discoveries being recognised this year demonstrate that our knowledge about the climate rests on a solid scientific foundation, based on a rigorous analysis of observations. This year’s Laureates have all contributed to us gaining deeper insight into the properties and evolution of complex physical systems,” says Thors Hans Hansson, chair of the Nobel Committee for Physics.

The awards issuing time will be December 10.