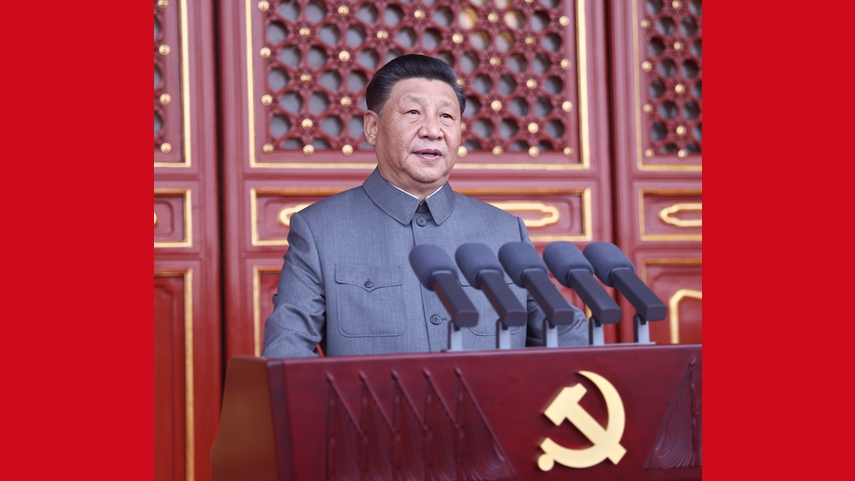 Stockholm， July3(ChinaEuropeDialogue) — Xi Jinping, general secretary of the Communist Party of China (CPC) Central Committee, Chinese president and chairman of the Central Military Commission, delivers an important speech at a ceremony marking the centenary of the CPC in Beijing, capital of China, July 1, 2021.

The Communist Party of China (CPC) on Thursday celebrated the 100th anniversary of its founding, as its top leader declared the achievement of a milestone development goal and announced that the Chinese nation is “advancing with unstoppable momentum toward rejuvenation.”

Addressing a grand gathering at the iconic Tian’anmen Square, where CPC forefather Mao Zedong proclaimed the birth of the people’s republic, Xi Jinping, general secretary of the CPC Central Committee, hailed the Party’s success over the past century and called on the whole Party to continue its hard work and carry out “a great struggle” to achieve national rejuvenation.

Xi delivered a nationally-televised speech from Tian’anmen Rostrum before a 70,000-strong crowd. The historic event also witnessed a chorus of Party songs, a flypast of fighter jets and helicopters, a 100-gun salute, and a flag-raising ceremony.

Xi, also Chinese president and chairman of the Central Military Commission, declared that China has realized the first centenary goal of “building a moderately prosperous society in all respects.”

“This means that we have brought about a historic resolution to the problem of absolute poverty in China, and we are now marching in confident strides toward the second centenary goal of building China into a great modern socialist country in all respects,” Xi said.

Reviewing the past 100 years, Xi said the Party has united and led the Chinese people in achieving great success in the new-democratic revolution, socialist revolution and construction, reform, opening up and socialist modernization, as well as for socialism with Chinese characteristics in the new era.

In 1921 when the CPC was founded, it had just over 50 members. Today, with more than 95 million members in a country of more than 1.4 billion people, it is the largest governing party in the world and enjoys tremendous international influence.

Xi paid tributes to CPC forefathers including Mao Zedong and Deng Xiaoping, as well as revolutionary martyrs who died for the Party’s cause.

“All the struggle, sacrifice, and creation through which the Party has united and led the Chinese people over the past hundred years has been tied together by one ultimate theme — bringing about the great rejuvenation of the Chinese nation,” Xi said, adding that this prospect “has become a historical inevitability.”

The ceremony was presided over by Li Keqiang, and attended by Li Zhanshu, Wang Yang, Wang Huning, Zhao Leji and Han Zheng — all members of the Standing Committee of the Political Bureau of the CPC Central Committee, as well as Vice President Wang Qishan.

At the event, Wan Exiang, chairman of the Central Committee of the Revolutionary Committee of the Chinese Kuomintang, read a congratulatory message on behalf of the eight non-CPC political parties in China, the All-China Federation of Industry and Commerce, and personages without party affiliation.

Over 1,000 young people, who are representatives of the Chinese Communist Youth League and Young Pioneers, conveyed their congratulatory message through a recitation at Tian’anmen Square, expressing the younger generation’s commitment to the CPC’s cause.

“I feel very honored,” said Wang Fangyanni, a 22-year-old university student who watched the celebrations on the spot. Wang gained full membership of the CPC in April.

Under the Party’s leadership, the country has lifted nearly 800 million people out of poverty over the past four decades. China is now the world’s second-largest economy, the largest recipient of foreign direct investment, and boasts one of the world’s largest consumer markets. Its GDP has exceeded the 100-trillion-yuan (about 15.47 trillion U.S. dollars) threshold.

Many people have experienced a significant improvement in their lives.

Bao Xianjie is one of them. A member of the Tu ethnic group, she relates the CPC centenary with changes in her home county in northwestern Qinghai Province, which has recently cast off poverty.

“When I returned home in recent years, I saw big changes: expressway has been opened, traffic is made convenient, and everyone’s life is getting better,” Bao told Xinhua at Tian’anmen Square.

Yang Pin-hua, an ethnic singer from Taiwan who has been living in Beijing for 14 years, was also in the audience at the square.

Having traveled to more than 70 mainland cities with large ethnic populations, Yang said he has seen those places undergoing tremendous changes over the years. “The Party’s support has reached every village and every ethnic group.”

In his address, Xi laid down principles that must be followed on the journey ahead.

The firm leadership of the Party must be upheld, he said, calling it the foundation and lifeblood of the Party and the country, and the crux upon which the interests and wellbeing of all Chinese people depend.

Vowing to remain committed to combating corruption and root out “any viruses that would erode its health,” Xi said the CPC must continue to advance the great new project of Party building.

“We must unite and lead the Chinese people in working ceaselessly for a better life,” he added.

Xi stressed continuing to adapt Marxism to the Chinese context.

NO PREACHING, NO BULLYING

Xi said efforts to uphold and develop socialism with Chinese characteristics must be continued. In doing so, the Party has “created a new model for human civilization.”

The Party is eager to learn what lessons it can from the achievements of other cultures, and welcomes helpful suggestions and constructive criticism, Xi said.

“We will not, however, accept sanctimonious preaching from those who feel they have the right to lecture us,” he said.

Xi added that the Chinese nation does not carry aggressive or hegemonic traits in its genes. “We have never bullied, oppressed, or subjugated the people of any other country, and we never will.”

But the Chinese people will never allow any foreign force to bully, oppress, or subjugate us, he said.

“Anyone who would attempt to do so will find themselves on a collision course with a great wall of steel forged by over 1.4 billion Chinese people,” Xi said, as the crowd present at Tian’anmen Square burst into thunderous applause and cheers.

He also called for making efforts to strengthen the great unity of the Chinese people.

Resolving the Taiwan question and realizing China’s complete reunification is a historic mission and an unshakable commitment of the CPC, Xi said, vowing resolute action to utterly defeat any attempt toward “Taiwan independence.”

“No one should underestimate the great resolve, the strong will, and the extraordinary ability of the Chinese people to defend their national sovereignty and territorial integrity,” he said. Enditem