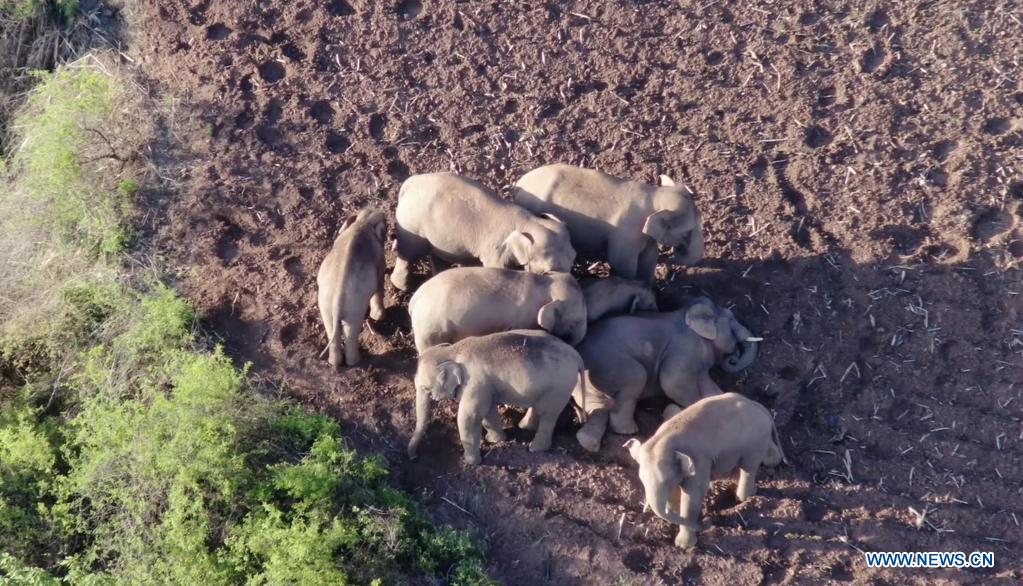 The herd headed 9.3 km north between 6 p.m. on Sunday and the same time on Monday. In recent days, they had moved back and forth within Yimen and Eshan counties, posing great challenges for on-site command and coordination of their migration.

There are many villages around the herd’s migration route and they are scattered, which has added to the difficulty of protecting the safety of the herd and local residents, according to the headquarters in charge of monitoring the elephants’ migration.

A male elephant, which strayed 16 days ago, is now about 24.6 km away in a forest in Kunming, the provincial capital.

Experts are continuing to work on plans to guide the elephants’ migration, and precautions have been taken to ensure the safety of both the animals and local residents. On Monday, a total of 186 people were mobilized, 4,106 local residents were evacuated, and 100 kg of food was provided to the elephants.

The animals have traveled about 500 km north from their forest home in southern Yunnan’s Xishuangbanna Dai Autonomous Prefecture, reaching Kunming on June 2.

For over a month, authorities have sent police to escort the herd, evacuated roads to facilitate their passage, and used food to distract them from entering densely populated areas.

Asian elephants are primarily found in Yunnan and are under A-level state protection in China. Thanks to enhanced protection efforts, the wild elephant population in the province grew to about 300, up from 193 in the 1980s.