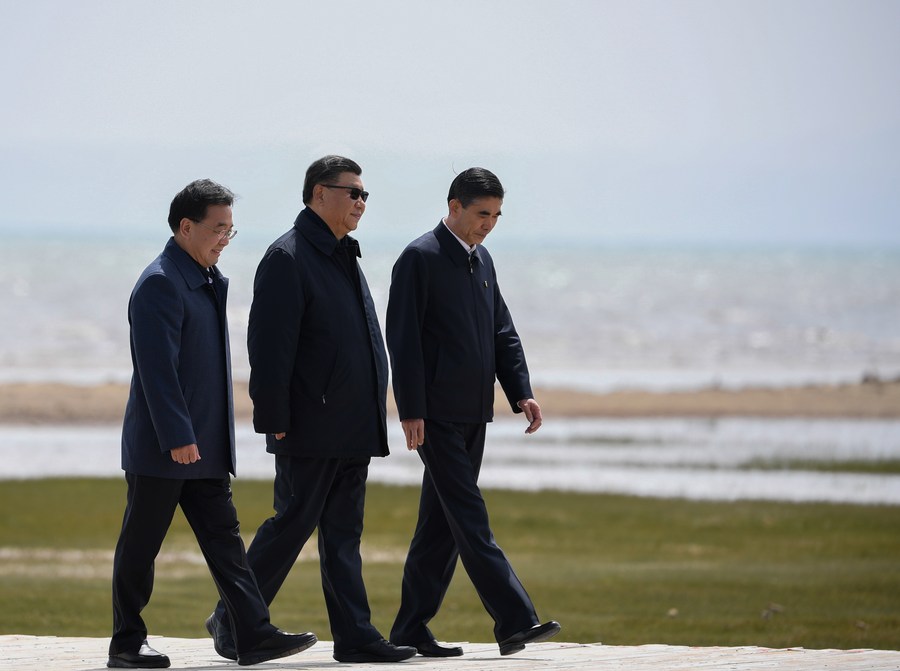 Xi, also general secretary of the Communist Party of China Central Committee and chairman of the Central Military Commission, made the remarks during his inspection tour of northwest China’s Qinghai Province from Monday to Wednesday.

The trip took Xi to the provincial capital Xining and the Haibei Tibetan Autonomous Prefecture. On Monday afternoon, Xi visited a carpet production company in Xining, where he learned about efforts in preserving and carrying forward local craft of hand-knitting carpets.

Xi stressed encouraging industries that have the most distinctive local features and the most vigorous enterprises in promoting high-quality development.

Inspecting the county of Gangcha in Haibei on Tuesday, Xi said the achievements in conserving the ecological environment of Qinghai Lake are hard-won, and must be cherished, consolidated and expanded.

He called for accelerated efforts in building a nature reserves system “centering on national parks, based on natural reserves and supplemented by various kinds of natural parks” to better protect the eco-environment and biodiversity.

Xi then went to a village in Shaliuhe Township where herdsmen have resettled. Visiting the home of a Tibetan herdsman, Xi said the Party has won the people’s wholehearted support because it has always served the people with heart and soul and strived for the wellbeing of all ethnic groups.

Speaking with villagers, Xi said he felt delighted to learn that they are leading happy lives. “We shall continue to work hard, and by the time New China celebrates its centenary, the Chinese nation will, without a doubt, stand firmer and stronger among the world’s nations,” he said.

Not a single ethnic group should be left behind in the efforts to fully build a modern socialist China, Xi said, adding that the rejuvenation of the Chinese nation can be only achieved when all ethnic groups remain closely united like the seeds of a pomegranate that stick together.

On Wednesday morning, Xi listened to the work reports of the provincial Party committee and government of Qinghai, and acknowledged the achievements the province has made in various fields.

Xi stressed Qinghai’s significant role in the country’s security in ecological, homeland, and resources and energy spheres, and urged the province to foster new industries, accelerate the development of a world-class salt lake industrial base, as well as make itself a clean energy industry leader, an international eco-tourism destination and a supplier of green farm and animal products.

Qinghai should stimulate technological innovation and actively align itself with major regional development strategies such as the Yangtze River Economic Belt to boost the internal drive of economic growth, he said.

On Qinghai’s environmental protection, Xi said that the conservation of the source of three major rivers should be the utmost priority.

The province should improve the management of national parks, restore the ecology of its various landscapes, protect biological diversity on the plateau, and promote ecological conservation and high-quality development along the Yellow River, he added.

Highlighting people’s wellbeing and the goal of prosperity for all, Xi urged the province to coordinate ecological conservation with people’s livelihood.

He also emphasized the need to consolidate the progress in poverty alleviation and further revitalize the countryside.

Xi expressed sympathy and concern to those affected by a 7.4-magnitude earthquake, which jolted Maduo County of Qinghai on May 22, and called for solid reconstruction efforts.

Noting the strategic role of Qinghai in safeguarding stability in Xinjiang and Tibet, Xi urged full implementation of the Party’s general plan for governing Tibet in the new era and stressed efforts to shoulder due responsibilities. He also called for more efforts to build the province into a paragon in ethnic unity and progress.

Efforts should go toward fully implementing the Party’s basic policy on religious work and providing guidance to religions so that they can adapt to a socialist society, Xi said.

Xi also highlighted the value of the Party’s revolutionary spirit, which has motivated the Party to forge ahead.

By studying the Party history, all Party members and cadres must remind themselves of the oath of loyalty to the Party, deliver benefits to the people, and exercise strict self-discipline, said Xi.

Xi also stressed further improving Party conduct, promoting integrity, and training a contingent of competent and professional officials loyal to the Party, with moral integrity and a keen sense of responsibility. ■