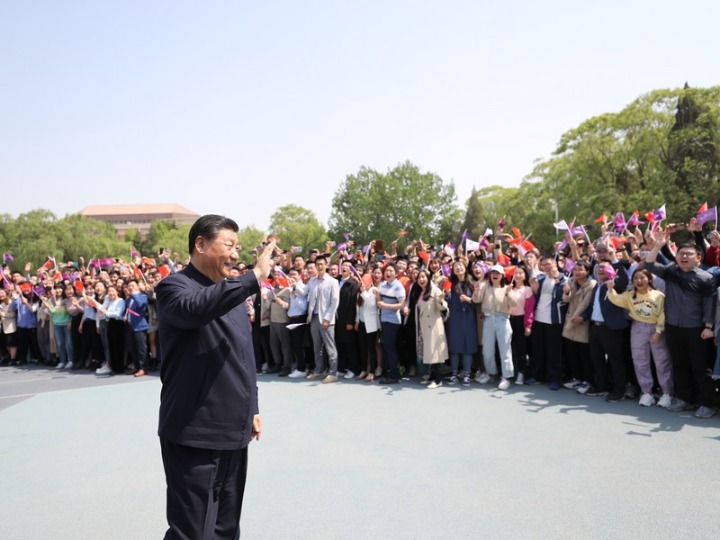 PARIS/MONTARGIS/LYON/CHARLEROI, May 17 (Xinhua) — Nearly a century after the founding of the Communist Party of China (CPC), some of the party’s pioneers, who were then just young students studying abroad, were still remembered by many in Europe with fondness and respect.

As the CPC celebrates its centenary this year, Xinhua revisited some of those places with footprints of the party’s founders and early leaders across the continent, to dig out stories about the early days of the world’s largest political party.

A small room on the ground floor of Hotel Neptune in downtown Paris witnessed the life of Zhou Enlai, the first premier of the People’s Republic of China (PRC), in his youth.

Zhou, born in 1898, lived here from 1922 to 1924 when he was among the thousands of progressive young Chinese who went to Europe under the Diligent Work-Frugal Study Movement to search for the future of the then-impoverished China.

In this small room which could barely accommodate a bed, a desk and a chair, Zhou studied and worked tirelessly, writing for a progressive newspaper based in north China’s Tianjin to promote new ideas he learned in Europe, and organizing communist activities.

Nearly 100 years later, now the hotel is run by Chinese-French Li Jianle, who believed that it is his obligation to protect the historic building and present it to both Chinese and foreign guests when he bought the hotel in 2001.

Today, with a bronze statue of Zhou carved by noted French sculptor Paul Belmondo in 1979 on its wall facing the street, the about 160-year-old building on rue Godefroy, Paris remains intact, standing to tell the story of its former tenant.

It was also in France that late Chinese leader Deng Xiaoping, the architect of China’s reform and opening-up, established a lifelong friendship with Zhou.

Deng, six years younger than Zhou, was among the more than 200 Chinese students who worked at Hutchinson factory by then on the outskirts of Montargis, a small town about 100 km south of Paris, said Wang Peiwen, president of the China-France Friendship Association in Montargis.

“My grandfather used to work there, too,” said Lea Pereira, a high school student at Lycee en Foret in Montargis.

In an interview with Xinhua, Pereira said her grandfather told her about Deng and other young Chinese communists. At 18, Deng lived in a wooden shed with his colleagues, worked 10 hours a day from Monday to Friday, and a half day on Saturday, for an hourly wage of one franc.

“I’m impressed by the horrible working conditions that Deng had to endure,” said Pereira’s classmate Flavien Gavoille. “I also admire him because he was never discouraged, and he successfully achieved his goals: by having completed his study in France and coming to know the communist ideology.”

The two teenagers are among dozens of Chinese language learners at Lycee en Foret. Their Chinese teacher has also briefed them on the history of the Chinese students who worked and studied in their hometown Montargis.

The small town with a population of 15,000 bears marks of that period of history: the square in front of the central railway station is named after Deng Xiaoping. A massive monument was erected there in 2019 to mark the 100th anniversary of the Diligent Work-Frugal Study Movement.

At Durzy Park, a black-and-white photo records a meeting held here in July 1920, when Chinese students in France gathered for five consecutive days discussing ways to save the Chinese nation. They proposed the founding of a Marxist party to lead the country.

At the end of the five days, Cai Hesen, a student leader, reported their ideas to his friend Mao Zedong, who readily accepted the proposal. A year later, the CPC was founded.

Jean-Louis Rizzo, a retired history professor of Paris Institute of Political Studies (SciencesPo), compared the students’ ideas in Montargis to “leaven” and an “embryo” of the CPC.

“It is a fantastic story: you initially have young people, little politicized, who arrived in France where politics was gaining in importance, with port and mine workers going on strikes,” said Rizzo. “The agitated social atmosphere in France had its impact on these young Chinese who were then working in French factories and enduring the same plight as the workers on strike.”

As a result, the young Chinese became more politically sensitive and learned to analyse the political situations before they were drawn by Marxism, he said.

For Sonia Bressler, a French philosopher and essayist, the Chinese students’ stay in France and their encounter with Western culture helped introduce new ideas to China. “This page of history also highlights the deep root of the friendship between the two countries,” she said.

This period of history also left its traces in Lyon, the third largest city in France where some Chinese students once fought for their right to study in 1921, when they were rejected by the Franco-Chinese Institute, a school built with funds from China and exclusively for Chinese students.

During the fight, they grew and gained experience, said Labat. “Some of them played a leading role in promoting Marxism and Communism in China.”

Memories for the Chinese communist pioneers were also kept at the Charleroi University of Labor, 60 km south of Brussels.

Founded in 1903 as a polytechnic school for the working class, it hosted many Chinese students in the 1920s, including one of China’s marshals Nie Rongzhen, a then chemical engineering major who came to know Communism and became a member of the CPC on this campus in Belgium.

“The CPC was founded at a critical time to save China from its plight and bring a revival of the nation,” said Fu Xuhai, founder of the Chinese Youth Federation of Europe. “It’s the unremitting efforts from generations of Chinese communists that have changed an isolated, underdeveloped country into the world’s second largest economy today.”

“It’s an honor for Charleroi to have participated in the training of these Chinese students in the 1920s,” said Willy Pourcel, a historian and librarian at the university. Enditem