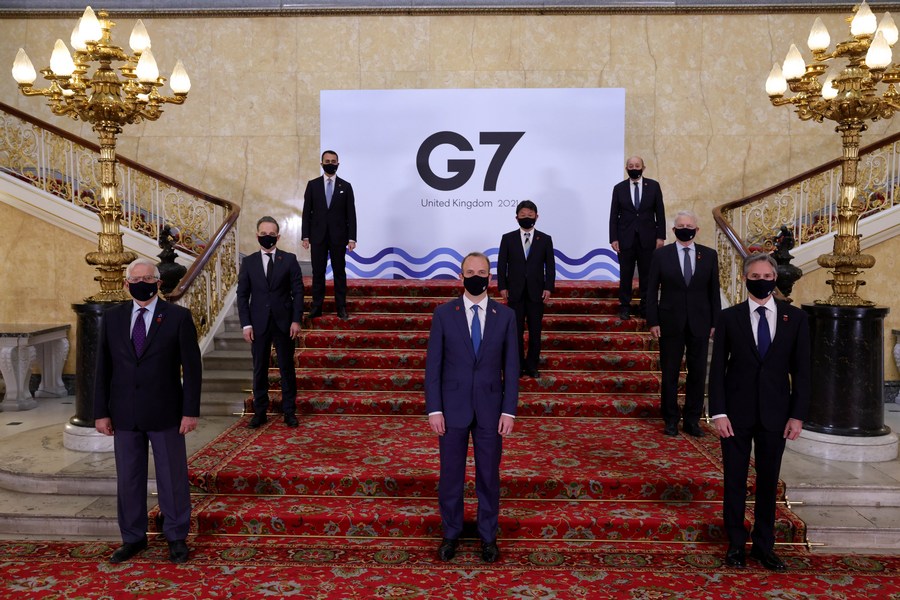 Representatives pose for a group photo during the meeting of the Group of Seven (G7) foreign and development ministers at Lancaster House in London, Britain, on May 4, 2021. (Andrew Parsons/No 10 Downing Street/Handout via Xinhua)

“Why blame China?” tweeted Martin Jacques, a renowned British scholar and political commentator. “The Western nations are failing to deliver for their people. China is delivering. That is why the West is in deep trouble.”

“Treat China with respect. Regard it as your equal. Honour the achievement of 1.4 bn people,” he added.

LONDON, May 6 (Xinhua) — As the first in-person meeting in two years of the Group of Seven (G7) foreign and development ministers ended here on Wednesday, officials vowed to tackle economic recovery after the COVID-19 pandemic, climate change, and various regional security issues.

Experts, however, have said the club of rich countries may prove to be inadequate to address global challenges if they fail to be more inclusive and seek exclusion of certain countries for reasons like ideological or political differences.

British Foreign Secretary Dominic Raab (R) meets with U.S. Secretary of State Antony Blinken ahead of the meeting of the Group of Seven (G7) foreign and development ministers in London, Britain, on May 3, 2021. (Tim Hammond/No 10 Downing Street/Handout via Xinhua)

To forge an alliance of “like-minded” countries, the G7 has invited representatives from the European Union, Australia, India, South Korea, South Africa, and this year’s chair of the Association of Southeast Asian Nations (ASEAN), Brunei, for the three-day meeting.

Experts, however, have said divisions among the countries and groups might not be easy to overcome, especially those regarding China, and therefore shutting out China by an expanded alliance is not possible.

“For many, China is an indispensable trading partner,” Khairy Tourk, professor of economics at Chicago-based Illinois Institute of Technology, said Wednesday on the Financial Times.

“For example, industrial associations such as the Federation of German Industries (BDI) in Germany and Keidanren in Japan, as well as the chaebol in South Korea, are all eager to participate with China in building projects in third (BRI) countries,” he added. “India, the largest beneficiary of the (China-led) Asian Infrastructure Investment Bank loans, is also reluctant to join an anti-China alliance.”

Robin Niblett, director and chief executive of London-based think tank Chatham House, pointed out that the motive to contain China is doomed.

“This more inclusive G7 should have positive core objectives this year. … not to seek to contain China or oppose Russia, on which there would not be agreement,” he said.

Niblett called on the group to focus on such a positive agenda as strengthening the countries’ economic and technological resilience as well as agreeing on common positions in the World Trade Organization on upgrading world trade rules.

Agreement in these areas could provide the platform for cooperation on sharing digital health data or building smart grids, thus tackling two of the biggest global challenges of the present day, resilience to the next pandemic and a successful energy transition away from reliance on fossil fuels, he added.

British Foreign Secretary Dominic Raab (C) hosts the meeting of the Group of Seven (G7) foreign and development ministers at Lancaster House in London, Britain, on May 4, 2021. (Simon Dawson/No 10 Downing Street/Handout via Xinhua)

What came visible during the G7 ministers’ meeting and in the flurry of bilateral meetings was that China remained high on the agenda.

In a joint communique issued after the G7 meeting, the ministers said they “look for opportunities to work with China to promote regional and global peace, security and prosperity.”

However, the communique did not fail to mention such issues as Xinjiang, Tibet and Hong Kong in the name of “human rights.”

The anti-China sensation purportedly hyped up by certain countries is not only utterly irresponsible but unhelpful to achieve the global unity much needed amid the most grave pandemic in living history, experts have said.

“Why blame China?” tweeted Martin Jacques, a renowned British scholar and political commentator, on Tuesday. “The West is failing because of huge inequality, miserable growth and disastrous handling of COVID. While Trump was by far the biggest threat to the international order.”

“Governance is not about nice-sounding words and phrases,” Jacques, also senior fellow at the Department of Politics and International Studies at the University of Cambridge, said in another tweet. “It is about delivery. The Western nations are failing to deliver for their people. China is delivering. That is why the West is in deep trouble.”

“Treat China with respect. Regard it as your equal. Honour the achievement of 1.4 bn people,” Jacques added.

In an earlier interview, Astrid Nordin, founding director of Lancaster University China Center, told Xinhua that she believes that now is not the time for confrontation.

“Frank and open discussions” are much needed from all sides to enable cooperation in various areas, she said.

David Phinnemore, professor of European politics at Queen’s University Belfast, has told Xinhua that for the G7 to stay relevant and tackle global challenges, it needs to engage with China.

“I think it (G7) has always served as a forum where you bring together some of the most powerful economists in the world,” he said. “But increasingly, it’s only some, it’s not all of them as they used to be the case. So we’re obviously missing quite significant power, economic powers there … China most obviously.”

“I think we’re not in the position, we were a couple of decades back where the G7 was seen by some people as the key to how the world was going to be economically, it doesn’t hold that same power and position that it did back then,” he said.

“We shouldn’t overstate its influence or importance,” he added. “We shouldn’t be over exaggerating our expectations from what’s going to come out of it in the coming years.”

Meanwhile, Phinnemore urged the G7 to welcome “healthy competition,” including with China, while avoiding competitions where certain countries are shunned out.

“While competition can be healthy, you want to have that competition managed in a way such that the detrimental impacts of it are minimized and that arguably everybody ideally can benefit from the cooperation,” he said.

John Vogler, professor of international relations at Keele University, also agreed that the concept of the G7 “is beginning to look a little bit dated” in the current global context.

“If I was thinking in terms of steering the global economy after the pandemic, and indeed, of talking about climate change, you can’t avoid having China in the room,” he added. ■