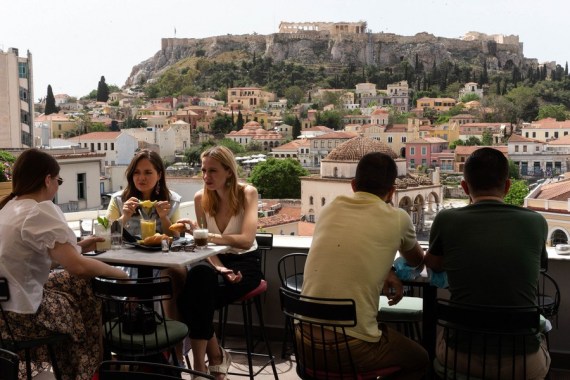 VALLETTA, May 16 (Xinhua) — Backed by the accelerated vaccination drive, easing of anti-COVID-19 restrictions and a wide array of fiscal stimulus, the 27-member European Union (EU) has forecast a faster economic rebound for this year and beyond.

The bloc believes that the pick-up of consumption, investment and exports would power its economic recovery, while it remains vigilant against uncertainties ahead.

The European Commission, the EU’s executive arm, revealed its Spring 2021 Economic Forecast report on Wednesday, projecting the EU economy to grow by 4.2 percent in 2021 and 4.4 percent in 2022, both higher than previous estimates, as the bloc is regaining confidence amid a faster COVID-19 vaccine rollout.

European Commissioner for Economy Paolo Gentiloni told a press conference that a massive recovery package would help the EU economy return to its pre-pandemic levels in the fourth quarter of 2021, and the eurozone would reach that point in the first quarter of 2022.

Among the major EU economies, Spain and France — heavily stricken by the pandemic last year — will report the highest growth rates in 2021, both approaching 6 percent, according to the EU’s forecast.

It predicts a modest 3.4 percent growth for Germany, and 2.3 percent for the Netherlands.

The EU’s economic recovery ties closely with the resilience of the global economy. The spring forecast report showed the global GDP excluding the EU is expected to expand by 5.9 percent in 2021 and 4.2 percent in 2022.

The International Monetary Fund (IMF), in the meantime, also gave an optimistic forecast for the global economy, issuing a report in April projecting the world economy to grow by 6 percent in 2021, and 4.4 percent in 2022.

“As long as there are no negative surprises, the European forecasts seem very reasonable,” Carsten Brzeski, chief economist for Germany at investment bank ING headquartered in the Netherlands, told Xinhua.

“The overall situation now looks much stronger than it did a few months ago. I think the potential near-term problems are factors that at worst would delay the recovery and not derail it,” he said.

The three engines, namely private consumption, investment and exports, will drive the resumed growth of the EU economy, according to the spring forecast report.

According to the report, private consumption is expected to rebound to take up 1.5 percent of EU’s GDP in 2021 and up to 3 percent in 2022. The public investment-to-GDP ratio is forecast to rise to almost 3.5 percent in 2022, driven by the Recovery and Resilience Facility, the key instrument of the EU stimulus funds.

Nils Jannsen, a senior researcher at the Germany-based Kiel Institute for the World Economy, took Germany for instance and said that as the vaccination campaign progresses and infection control measures are eased, consumer spending is likely to surge again and the economic recovery in Germany will start a second run.

“With the good order situation in the German industry, which is responsible for a significant part of investments, business investments should also pick up quickly, especially as the uncertainty in sales prospects is expected to decrease further due to the increasing availability of effective vaccines,” he added.

The EU also pinned hope on the recovery of the global economy to stimulate its exports, predicting that EU export markets are set to increase by 8.3 percent in 2021 and 6.4 percent in 2022.

Experts expressed confidence in the rebound of industrial sectors across Europe, especially in major EU members like Germany, Italy and France.

The Federation of German Industries expected a rapid economic recovery in all major EU economies, with this year’s industrial output predicted to grow by 8 percent in Germany, 10 percent in Italy, 7 percent in France and 6 percent in Spain.

Improving economic performances in China and the United States will also have a ripple effect across the world and help raise European exports, said Brzeski.

Despite its robust GDP growth forecast, the EU is well aware of the risks surrounding the outlook as long as the shadow of the COVID-19 pandemic still hangs over the economy.

In its spring forecast, the bloc acknowledged there were risks associated with record-high debt and deficit spending aimed at staving off the worst impacts of the pandemic.

The IMF also warned that global prospects remain highly uncertain one year into the pandemic and said the outlook depends not just on the outcome of the battle between the virus and vaccines, but also on how effectively the economic policies can limit lasting damage from this unprecedented crisis.

Gentiloni cautioned that “the risk of scarring, with a worsening of poverty, social exclusion and inequality, is very real.” He also pointed out that “we must avoid mistakes that could undermine it: namely, a premature withdrawal of policy support.”

Another risk could lie in a new coronavirus strain that might have a negative impact if it proves resistant to the main vaccines being used in Europe, said Lorenzo Codogno, founder and chief economist of LC Macro Advisors Ltd and a visiting professor at the London School of Economics.

Another challenge for European officials will be to manage expectations for the continent’s economic recovery, he added. Enditem