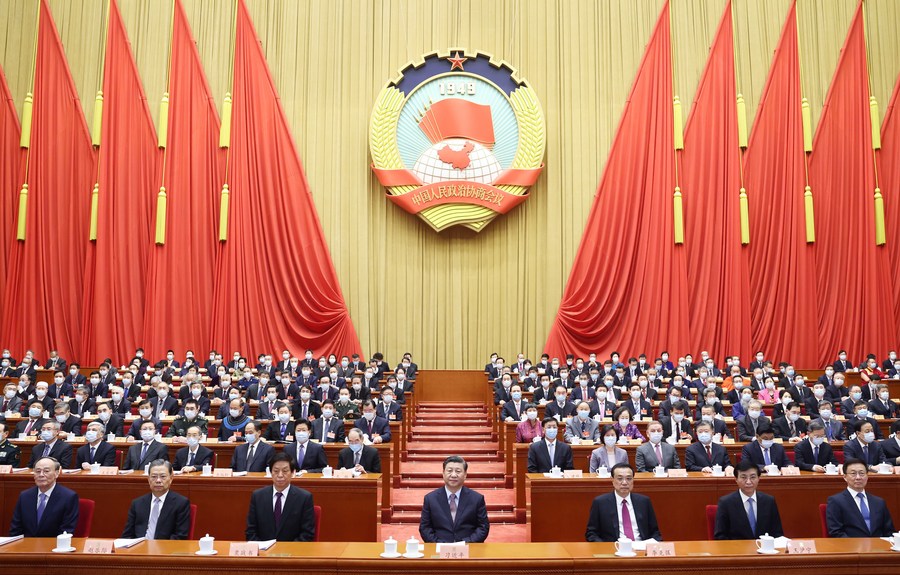 — This year marks the 100th anniversary of the founding of the Communist Party of China, as well as the starting point on a new journey to fully building a modern socialist China

— Premier Li Keqiang is expected to deliver a government work report, which will be closely watched as China has emerged among the first countries to restore economic growth.

— This year’s two sessions are expected to garner more attention from home and abroad as lawmakers will deliberate a blueprint for China’s development in the next five to 15 years.

— The two sessions returning to its traditional March schedule is an embodiment of China’s success in effectively containing the COVID-19 epidemic.

Chinese President Xi Jinping and other Chinese leaders attended the opening meeting of the session at the Great Hall of the People.

“This year marks the 100th anniversary of the founding of the Communist Party of China (CPC), as well as the starting point on a new journey to fully building a modern socialist China,” Wang Yang, chairman of the National Committee of the Chinese People’s Political Consultative Conference (CPPCC), told a gathering of more than 2,000 political advisors.

Wang called on political advisors to devote their wisdom and strength to the construction of a modern socialist country.

The National People’s Congress (NPC), China’s top legislature, will begin its annual session on Friday. The dual meetings, also known as the “two sessions,” will set the general national agenda for the whole year and beyond.

Premier Li Keqiang is expected to deliver a government work report, which will be closely watched as China has emerged among the first countries to effectively contain the COVID-19 pandemic, reopen the economy safely, and restore economic growth. The country’s development goals and plan for 2021 are expected to be unveiled in the report.

Zhang Liqun, a research fellow with the Development Research Center of the State Council, said China’s economy is resilient, has potential and will maintain sustained growth in 2021.

Zhang, however, noted that the primary goal of economic development is not to seek a nice-looking GDP figure but to raise the quality of the growth and ensure people’s well-being.

This year’s two sessions are expected to garner more attention from home and abroad as lawmakers will deliberate a blueprint for China’s development in the next five to 15 years — the draft outline of the 14th Five-Year Plan (2021-2025) and the long-range objectives through the year 2035.

“This year’s two sessions do not just serve for the work in 2021, but also the goals and tasks set by the 14th Five-Year Plan. We must fulfill the great mission of our times,” said Bai Chongen, a CPPCC National Committee member and dean of the School of Economics and Management at Tsinghua University.

The draft outline will be under the spotlight for its comprehensive and targeted measures echoing China’s new development philosophy, said Xin Ming, a professor at the Party School of the CPC Central Committee (National Academy of Governance).

Topics including high-quality economic development, sci-tech innovation, rural vitalization and eco-protection will also draw much attention, Xin said, adding that “dual circulation” development paradigm will be another highlight, in which domestic and overseas markets reinforce each other, with the domestic market as the mainstay.

The 14th Five-Year Plan will further clarify how China will implement the dual circulation strategy and achieve high-quality development, observers say, noting that unleashing domestic demand is crucial to driving China’s growth, but this new development paradigm does not mean China will backpedal on its opening-up drive.

China’s pursuit of self-reliance “is never to close its doors but to build a new development paradigm based on wider and higher-level opening-up,” explained Wang Yiming, a member of the CPPCC National Committee.

During the past year, China had actively cooperated with other countries and regions. It signed the Regional Comprehensive Economic Partnership (RCEP) agreement in November and completed investment agreement negotiations with the European Union in December.

“China’s economy has been deeply integrated into the global economy. As China enters the new stage of development, its ties with the world economy will get even closer,” said Ji Zhiye, former head of China Institutes of Contemporary International Relations who is also a member of the CPPCC National Committee. Ji said the international capitals are optimistic about the Chinese market thanks to the country’s business environment and economic resilience.

The two sessions returning to its traditional March schedule is an embodiment of China’s success in effectively containing the COVID-19 epidemic. The arrangement reconfirms that China’s political, economic and social life is returning to normal, injecting confidence into the world amid the fight against the virus.

Zhang Wenhong, head of the Center for Infectious Diseases at the Shanghai-based Huashan Hospital of Fudan University, said he is hopeful that China will not have any major COVID-19 resurgence this year thanks to its anti-epidemic experience and strong control measures.

Promoting vaccination across the country is the focus of the next stage of epidemic control, according to Zhang, who also heads Shanghai’s COVID-19 clinical expert team. As of the end of February, more than 52 million doses of COVID-19 vaccines had been administered across China.

The world today is caught between a pandemic of the century and momentous changes never seen over the past one hundred years, bringing about many risks and challenges for China on its way ahead.

China’s nationwide unity is the most solid support for overcoming all kinds of difficulties, and the two sessions are an important platform to pool the country’s strength, said Luo Jie, an NPC deputy and head of the Taihe Hospital in Shiyan, central China’s Hubei Province.

Embarking on the new journey, this year’s two sessions will unite the people to concertedly strive toward a brighter future with great opportunities, said another NPC deputy Cui Genliang.