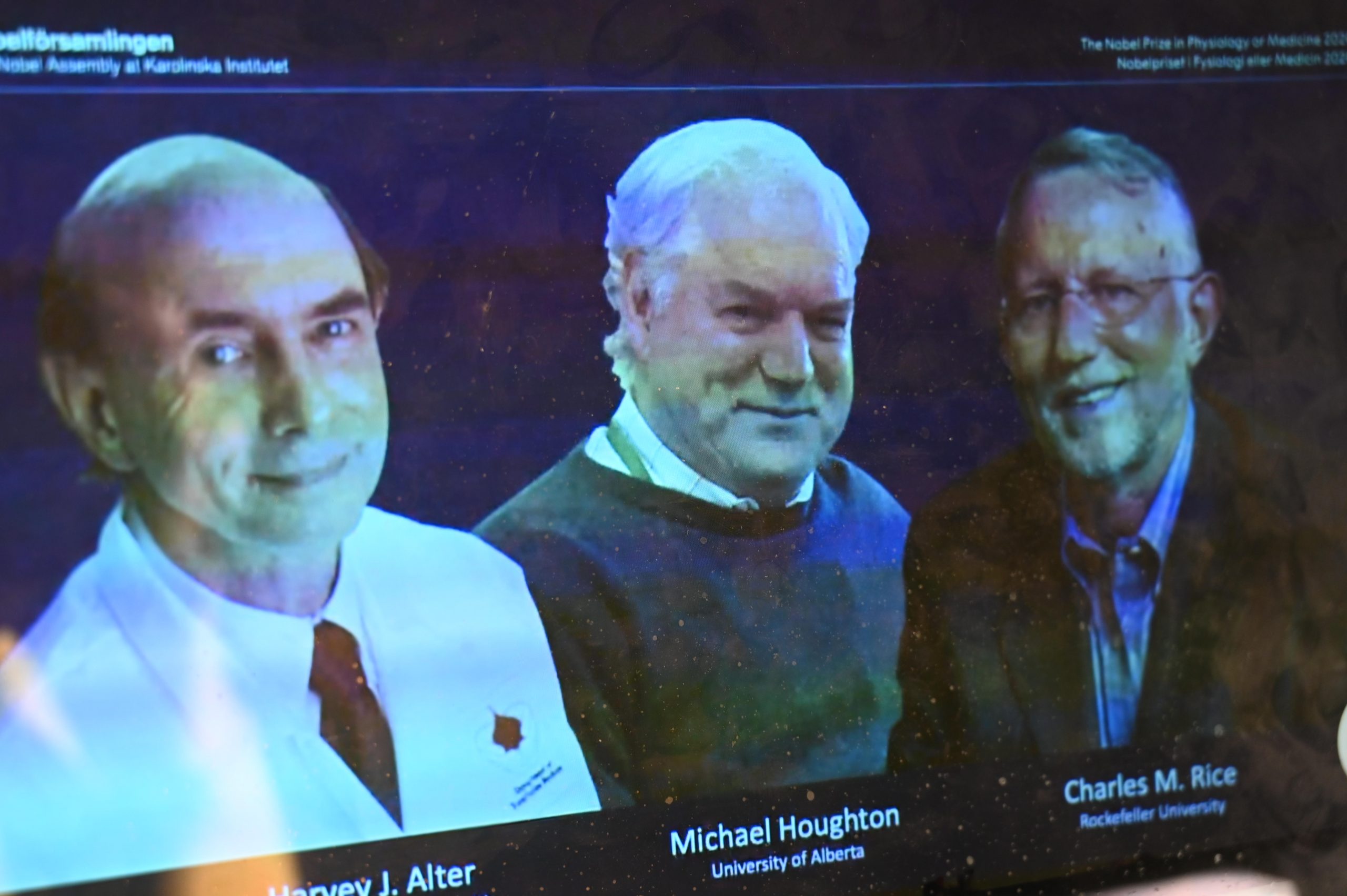 Stockholm, Oct. 5(ChinaEuropeNews) – -The Nobel Assembly at Karolinska Institutet has today decided to award the 2020 Nobel Prize in Physiology or Medicine jointly to Harvey J. Alter, Michael Houghton and Charles M. Rice
for the discovery of Hepatitis C virus.

This was announced by Tomas Perlman, Secretary of Nobel Assembly at Karolinska Institutet on Monday.

In the 1960’s, Baruch Blumberg determined that one form of blood-borne hepatitis was caused by a virus that became known as Hepatitis B virus, and the discovery led to the development of diagnostic tests and an effective vaccine. Blumberg was awarded the Nobel Prize in Physiology or Medicine in 1976 for this discovery.

At that time, Harvey J. Alter at the US National Institutes of Health was studying the occurrence of hepatitis in patients who had received blood transfusions. Although blood tests for the newly-discovered Hepatitis B virus reduced the number of cases of transfusion-related
3 hepatitis, Alter and colleagues worryingly demonstrated that a large number of cases remained. Tests for Hepatitis A virus infection were also developed around this time, and it became clear that Hepatitis A was not the cause of these unexplained cases.

It was a great source of concern that a significant number of those receiving blood transfusions developed chronic hepatitis due to an unknown infectious agent. Alter and his colleagues showed that blood from these hepatitis patients could transmit the disease to chimpanzees, the only susceptible host besides humans. Subsequent studies also demonstrated that the unknown infectious agent had the characteristics of a virus. Alter’s
methodical investigations had in this way defined a new, distinct form of chronic viral hepatitis.

Michael Houghton, working for the pharmaceutical firm Chiron, undertook the arduous work needed to isolate the genetic sequence of the virus. Houghton and his co-workers created a collection of DNA fragments from nucleic acids found in the blood of an infected chimpanzee.
The majority of these fragments came from the genome of the chimpanzee itself, but the researchers predicted that some would be derived from the unknown virus. On the assumption that antibodies against the virus would be present in blood taken from hepatitis patients, the investigators used patient sera to identify cloned viral DNA fragments encoding viral proteins.
Following a comprehensive search, one positive clone was found. Further work showed that this clone was derived from a novel RNA virus belonging to the Flavivirus family and it was named Hepatitis C virus. The presence of antibodies in chronic hepatitis patients strongly implicated this virus as the missing agent.
The methodical studies of transfusion-associated hepatitis by Harvey J. Alter demonstrated that an unknown virus was a common cause of chronic hepatitis. Michael Houghton used an untested strategy to isolate the genome of the new virus that was named Hepatitis C virus. Charles M. Rice
provided the final evidence showing that Hepatitis C virus alone could cause hepatitis.

The discovery of Hepatitis C virus was decisive; but one essential piece of the puzzle was missing: could the virus alone cause hepatitis? To answer this question the scientists had to investigate if the cloned virus was able to replicate and cause disease. Charles M. Rice, a researcher at Washington University in St. Louis, along with other groups working with RNA
viruses, noted a previously uncharacterized region in the end of the Hepatitis C virus genome that they suspected could be important for virus replication. Rice also observed genetic 4 variations in isolated virus samples and hypothesized that some of them might hinder virus replication. Through genetic engineering, Rice generated an RNA variant of Hepatitis C virus that included the newly defined region of the viral genome and was devoid of the inactivating genetic variations. When this RNA was injected into the liver of chimpanzees, virus was detected in the blood and pathological changes resembling those seen in humans with the
chronic disease were observed. This was the final proof that Hepatitis C virus alone could cause the unexplained cases of transfusion-mediated hepatitis.
Significance of this Nobel Prize-awarded discovery
The Nobel Laureates’ discovery of Hepatitis C virus is a landmark achievement in the ongoing battle against viral diseases. Thanks to their discovery, highly sensitive blood tests for the virus are now available and these have essentially eliminated post-transfusion hepatitis in many parts of the world, greatly improving global health. Their discovery also allowed the rapid development of antiviral drugs directed at hepatitis C. For the first time in history, the disease can now be cured, raising hopes of eradicating Hepatitis C virus from the world population. To achieve this goal, international efforts facilitating blood testing and making antiviral drugs available across the globe will be required.

The discoveries by the three Nobel laureates allowed the design of sensitive blood tests that have eliminated the risk of transfusion-transmitted hepatitis in a large part of the world. This breakthrough also enabled the development of antiviral drugs that can cure the disease. Hepatitis C remains a major global health concern, but the opportunity now exists to
eliminate the disease.

Harvey J. Alter was born in 1935 in New York. He
received his medical degree at the University of
Rochester Medical School, and trained in internal
medicine at Strong Memorial Hospital and at the
University Hospitals of Seattle. In 1961, he joined the
National Institutes of Health (NIH) as a clinical
associate. He spent several years at Georgetown
University before returning to NIH in 1969 to join the
Clinical Center’s Department of Transfusion Medicine
as a senior investigator.

Michael Houghton was born in the United Kingdom.
He received his PhD degree in 1977 from King’s
College London. He joined G. D. Searle & Company
before moving to Chiron Corporation, Emeryville,
California in 1982. He relocated to University of Alberta
in 2010 and is currently a Canada Excellence Research
Chair in Virology and the Li Ka Shing Professor of
Virology at the University of Alberta where he is also
Director of the Li Ka Shing Applied Virology Institute.

Charles M. Rice was born in 1952 in Sacramento. He
received his PhD degree in 1981 from the California
Institute of Technology where he also trained as a
postdoctoral fellow between 1981-1985. He established
his research group at Washington University School of
Medicine, St Louis in 1986 and became full Professor in 1955.

Since 2001 he has been Professor at the
Rockefeller University, New York. During 2001-2018 he
was the Scientific and Executive Director, Center for the
Study of Hepatitis.

This years Nobel Prize was not unexpected. Swedish mainstream newspaper DN yesterday already predicted that Hepatitis C discovery could win this year’s Nobel Prize, it was quite accurate.