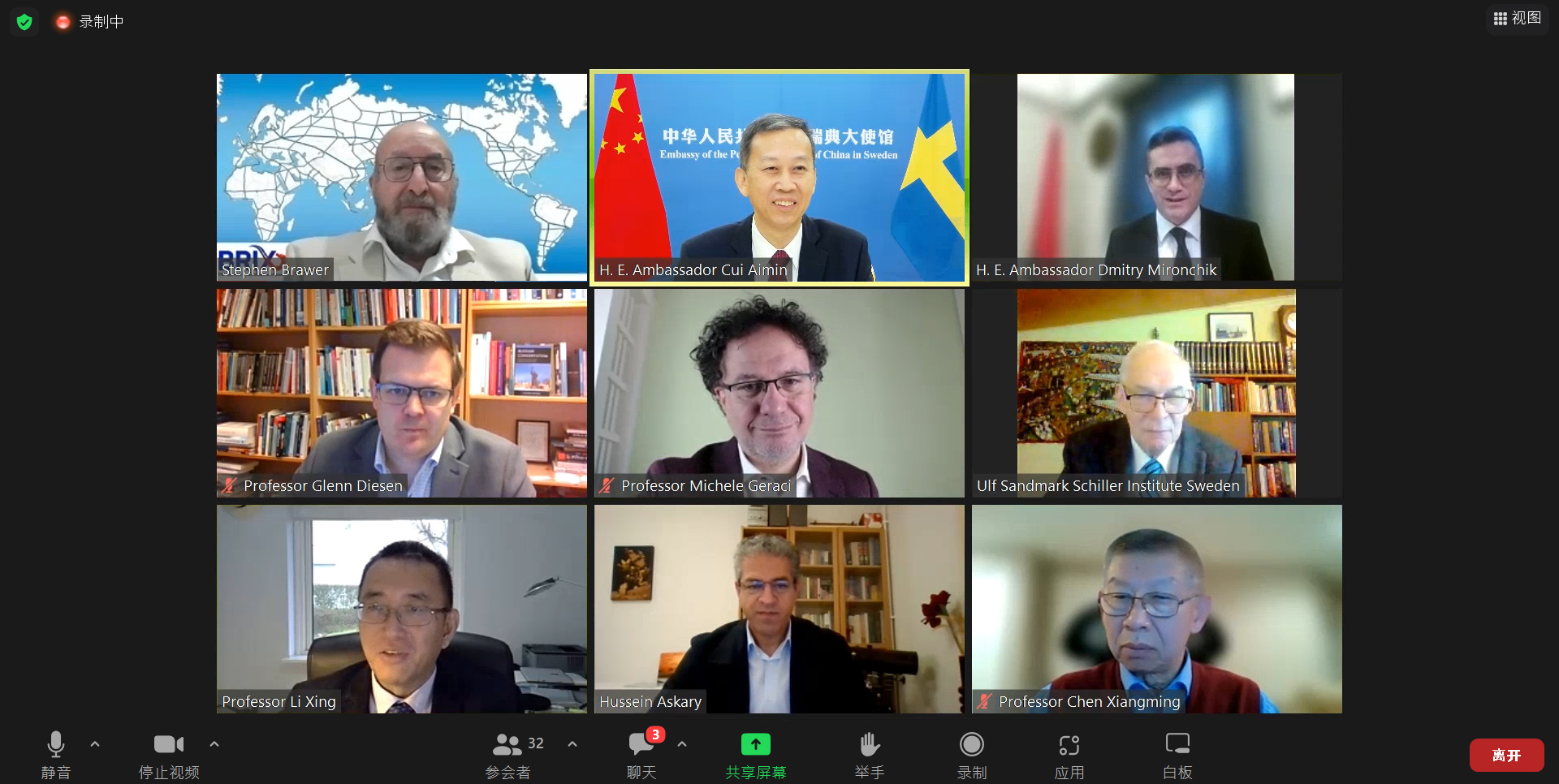 Stockholm, Dec. 3(CED) — A Webbinar on the Outcome and Implications of the 20th National Congress of the Communist Party of China has been successfully held in Stockholm both online and offline.

The Belt and Road Institute in Sweden (BRIX) organized the high-level international webinar on November 29 under the title “The Outcome and Implications of the 20th National Congress of the Communist Party of China”. The webinar was addressed by a select panel of diplomats and international and Swedish scholars. It was attended by guests from more than 15 nations.

Mr. Stephen Brawer, Chairman of the Belt and Road Institute in Sweden (BRIX) opened the webinar by reviewing the work and efforts of the BRIX in the past few years to present an objective and truthful picture of the Belt and Road Initiative (BRI) launched by Chinese President Xi Jinping in 2013. He also announced plans for activities in the year 2023 as it will coincide with the 10th anniversary of the launching of the BRI.

Mr. Brawer reflected on the historical, economic, and philosophical grounds for the past and future relations between Europe and China, citing the great European philosopher and scientist Gottfried Wilhelm Leibniz. He emphasized that this is a great inspiration for people and leaders in Sweden and the EU to commit to the idea of East-West win-win cooperation.

H. E. Mr. Cui Aimin, Ambassador of the People’s Republic of China to Sweden, keynoted the webinar (read full text!) reflecting first on the great achievements of the Communist Party of China (CPC) in serving the fundamental interests of the Chinese people and the outcome of the 20th National Congress of the CPC.

Ambassador Cui pointed out that Sweden is a founding member of the Asian Infrastructure Investment Bank (AIIB), and the Swedish business community has shown great interest and positive attitude in promoting mutually beneficial cooperation with China under the framework of the Belt and Road Initiative. At present, both China and Sweden are actively promoting green development, which provides great opportunities for the two countries to carry out cooperation in a wider range and at a deeper level.

China will continue to follow the principle of extensive consultation, joint contribution and shared benefits, and work with all parties, including Sweden, to promote better synergy between the Belt and Road Initiative and other countries’ development strategies and regional cooperation initiatives, Ambassador Cui said. “We are committed to achieving greater and more convenient connectivity, pushing practical cooperation to a higher level, providing more opportunities for the world, injecting stronger impetus into international cooperation, and making greater contributions to the progress of mankind”, he concluded.

H.E. Mr. Dmitry Mironchik, Ambassador of the Republic of Belarus to Sweden and Norway, addressed the webinar and explained in detail the major role played by Belarus as a bridge between East and West along the China-EU rail and road corridor. He laid out the positive implications of increased China-Belarus cooperation for the rest of Europe. An important aspect of Mr. Mironchik’s statement was related to the principles that should govern relations between nation states in this period to further peace and economic development for all nations.

Professor Michele Geraci, former Undersecretary of State at the Italian Ministry of Economic Development and who played a key role in forming the Italy-China memorandum of understanding on joining the BRI, made strong arguments on why the prosperity of Europe and the West in general depends on prosperity of all other nations, especially China. In contradiction to the more prevalent zero-sum-game mentality, Professor Geraci argued that every party in the world will benefit in their own way from joint cooperation through a global division of labor. Most importantly, he stated that bringing serenity to the world and peace demands tighter cooperation among nations.

Dr. Li Xing, Professor of Politics and Society at Aalborg University in Denmark, presented a thorough and scientific picture of the different dimension that the rivalry between China and the United States are taking. He also referenced its implication, both the positive and negative ones. The main challenge, according to Professor Li is if the U.S. and consequently the EU, which finds itself “standing in two boats”, will now find a common ground for cooperation and how that world order look like. Professor Li explained how the Belt and Road Initiative is already shaping the world, especially in Asia.

Professor Glenn Diesen of the University of Southeastern Norway, who has authored many books and studies on international geopolitics, presented a fascinating tour d’horizon over the shift of global economic power to the East with China at the center of it, and on the obsoleteness of the shrinking unipolar order lead by the West. He cited the Global Security Initiative and Global Development Initiative launched by the Chinese President Xi Jinping in 2021, arguing that security and economic development are inseparable. Professor Diesen advised the West to find a way of adapting to the new situation in the world, for example through joining such global connectivity initiatives like the Belt and Road Initiative.

Professor Chen Xiangming, Director of Urban Studies Program at Trinity College, Hartford, Connecticut (United States), made a thoroughly scientific presentation titled “From Double Turns to Dual Circulation: China’s Role in Reshaping Global Regionalization”, in which he focused on the role of the Belt and Road Initiative as a vehicle of a new regional economic integration. He noted that the 20th National Congress of the CPC re-energized this aspect of China’s policy. He presented a paradox asserting that the global economy has become “more regionalized than globalized” based on recent books one of which he co-authored.

Professor Chen further explained how the combination of the decision made at the 20th National Congress of the CPC on the one hand and the fact that the 2023 will bring forth the 10th anniversary of the BRI. China’s rise as an economic power externally and internally, in addition to regional connectivity corridors and hubs in the East, combined with long-range transport initiatives (Eurasian land-sea routes) give China a more enhanced role in shaping world economic relations.

The final speaker in this increasingly fascinating webinar was Mr. Ulf Sandmark, Chairman of the Schiller Institute in Sweden, congratulated the Chinese people and President Xi for his reelection as General Secretary of the CPC and on the successful conclusion of the 20th National Congress. He lauded the determination and strong commitment of the members of the CPC to “forge ahead with the great Chinese Dream of rejuvenating the nation”. He further expressed his optimism that China will play a positive role in promoting global peace and development through the Global Development Initiative and the Global Security Initiatives.

Mr. Sandmark, who is an economist reviewed the great achievements of China in the past three decades in not only eliminating poverty but increasing the productivity and innovation power of the 800 million-strong labor force. He also pointed at the very important development of the scientific economic outlook of the CPC, a process which owes a great deal to the economic thought of President Xi. The development of the creativity of the individual and member of the labor force is the greatest source of wealth for society, he stressed. Mr. Sandmark lamented the fact that blocking Chinese advanced technology companies like Huawei is a greater loss for Sweden than it is for China, and called for a better understanding and active work for win-win cooperation with China and other nations along the BRI.

Q & A Session: Dialog of Civilizations

A lively and further enriching Q&A session ensued in which the panelists fielded questions from the audience and commented on what was discussed by each panelist. Both the panelists and some in the audience expressed their appreciation of the BRIX continued efforts to present real facts about the BRI based on thorough research and fact checking which is so lacking in the Western media in general when it comes to this matter.

Ambassador Cui Aimin reiterated China’s position which emanated from the 20th National Congress that the CPC that it is not only committed to achieving the prosperity of the people of China and fulfill the Chinese dream of rejuvenation of the nations, but will also contribute to global peace, security and economic development. He thanked the organizers and participants in the webinar. Ambassador Mironchik contributed further to the theme of East-West cooperation but that it should be based on international law, mutual respect and win-win cooperation which Belarus-China are great examples of. He also lauded China’s great contribution to fighting the COVID-19 pandemic and for providing the Chinese vaccines to many nations, including Belarus.

The discussion period showed the beautiful aspect of a calm and respectful dialog between officials and experts from many different nations, with different political, social, and cultural backgrounds. The fact is that “a community of a shared future for mankind” is not a far-fetched fantasy but a very likely outcome of the current situation if nations and leaders throw aside such narrow-minded views as zero-sum games, imperialist geopolitics, and egotism. This webinar showed exactly that.

The BRIX board of directors wishes to express its gratitude to all who contributed to and participated in this last webinar of 2022 and invites everyone to rejoin us and support us in making the year 2023 the year of the Belt and Road as we embark on celebrating its tenth anniversary.

SEE THE PLAYLIST OF INDIVIDUAL SPEECHES AND PRESENTATIONS!

Save my name, email, and website in this browser for the next time I comment.I agree that my submitted data is being collected and stored. For further details on handling user data, see our Privacy Policy

Highly Successful Webinar: The Outcome and Implications of the 20th National Congress of the Communist Party of China

brixswedenDecember 2, 2022The Belt and Road Institute in Sweden (BRIX) organized a high-level international webinar on November 29 under the title “The Outcome and Implications of the…

Webinar: Outcome and Implications of the 20th National Congress of the Communist Party of China

brixswedenNovember 28, 2022The Belt and Road Institute in Sweden invites you to attend the webinar “The Outcome and Implications of The 20th National Congress of The Communist…Several news