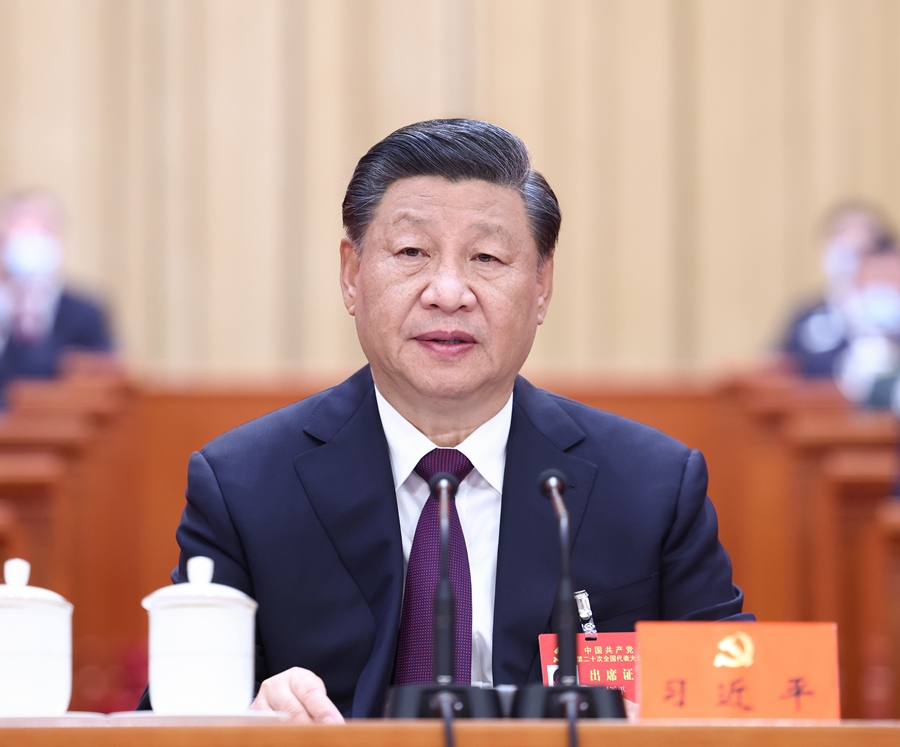 BEIJING, Oct. 27 (CED) — Xi Jinping has called on all Chinese people to stay united as “a piece of hard steel” under the leadership of the Communist Party of China (CPC) and pull together with one mind to power the giant ship of national rejuvenation through the wind and waves to reach its destination.

Xi made the remarks when he joined a group discussion with delegates from south China’s Guangxi Zhuang Autonomous Region who are attending the 20th CPC National Congress on Oct. 17.

Xi said the report of the 19th CPC Central Committee to the 20th CPC National Congress further points out the direction for the development of the Party and the country’s cause, and serves as a political declaration and program of action for the Party to unite Chinese people to uphold and develop socialism with Chinese characteristics.

Five delegates from Guangxi shared their views on the report delivered by Xi at the opening of the congress on Sunday.

They all agreed that the report, from a commanding height in considering both China’s national rejuvenation and the drastic changes in the world unseen in a century, scientifically lays out goals, tasks, and major policies for developing the cause of the Party and the country in the next five years or even longer period to come, putting forward a series of new approaches, strategies and measures.

They expressed unanimous endorsement of the report.

Xi joined the delegates in a lively discussion. After listening to their comments, Xi said he is pleased to participate in the discussion as a fellow delegate of the Guangxi delegation.

Hailing the tremendous changes Guangxi has undergone in the past decade, Xi said that such achievements are a vivid epitome of the great changes taking place in China in the first ten years of the new era.

The cause of the Party and the country has withstood potential dangers and overcome difficulties over the past decade, achieving a series of breakthroughs and yielding landmark results one after another, Xi said.

The major policies, principles, plans and decisions of the CPC Central Committee have proven to be in every way correct. The path of socialism with Chinese characteristics is suited to China’s realities, reflects the will of the Chinese people, and responds to the call of the times, he said.

Xi called on CPC members to firm up confidence in history, exhibit greater historical initiative, and perform their duties well for history and the people on the road ahead.

To study and implement the Party’s innovative theories, one must understand and grasp their worldview and methodology, he said.

The report submitted to the 20th CPC National Congress stresses that the entire Party must put the people first, maintain self-confidence and stand on our own feet, uphold fundamental principles and break new ground, adopt a problem-oriented approach, apply systems thinking, and maintain a global vision.

Xi urged efforts to gain a good command of the above-mentioned six points and make good use of them while implementing the Party and the country’s work in various fields and throughout the process.

Chinese modernization is rooted in China and is suited to the country’s realities, Xi said.

He called for forging ahead with confidence, upholding fundamental principles and breaking new ground, and striving to open new chapters in building a modern socialist country in all respects.

The CPC Central Committee has made advances in exercising full and rigorous Party self-governance since the 18th CPC National Congress, waged a battle against corruption on a scale unprecedented in history, and rolled out a raft of policies and measures to push forward self-reform, Xi said.

The Party must persevere with self-reform to ensure that it will never change its nature, its conviction, or its character, and that it will remain the strong leadership core in building socialism with Chinese characteristics, Xi said.

Only in unity and through endeavors can we succeed. Currently, the most important task is to roll up sleeves and get down to work to ensure the solid implementation of major decisions and plans made during the 20th CPC National Congress, Xi said.

Xi called on Party committees and governments at all levels of Guangxi to bring together cadres and people of all ethnic groups and lead them in breaking new ground for Guangxi’s development in the new era.