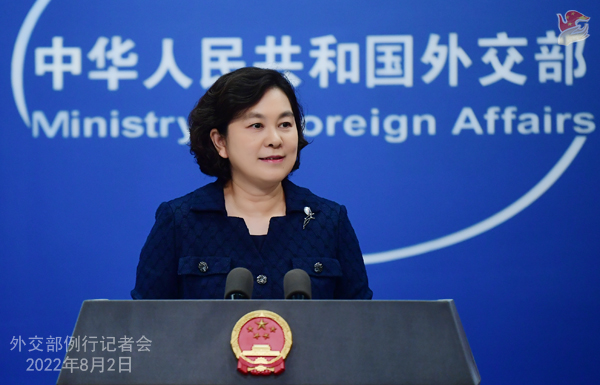 Spokesperson Hua Chunying told a daily press briefing in response to relevant questions that China will take all necessary measures to safeguard its sovereignty and territorial integrity. All consequences arising therefrom shall be borne by the U.S. side and Taiwan separatist forces.

Looking back on the past, the spokesperson stressed that every provocation the United States made against China embarrassed itself.

Hua said the latest example is that Pelosi and others incited violence in Hong Kong and advocated the so-called “beautiful scenery.” However, they just accelerated Hong Kong’s transition from chaos to stability and prosperity and made the Oriental Pearl shine again.

When asked for comment about U.S. officials trying to justify Pelosi’s visit to Taiwan and even to shift blame, Hua pointed out that those officials are trying their best to make excuses and accusations. It reflects the lack of credibility, knowledge about history, and self-reflection on the part of the U.S. government.

In history, the Taiwan question was once the biggest obstacle in normalizing China-U.S. relations, Hua said, noting that’s because China firmly adheres to the one-China principle and makes no compromise or concession on the Taiwan question.

The U.S. side explicitly declared in the Shanghai Communique released in 1972 that “the United States acknowledges that all Chinese on either side of the Taiwan Strait maintain there is but one China and that Taiwan is a part of China. The United States Government does not challenge that position.” The afore-mentioned commitments made by the U.S. side started the process toward normalization of China-U.S. relations, Hua said.

She also mentioned the Joint Communique on the Establishment of Diplomatic Relations between the United States of America and the People’s Republic of China released in 1978 and the August 17 Joint Communique of 1982, demonstrating the commitments made by the U.S. side is clear and inked in the documents.

However, in recent years, the U.S. side constantly distorts, obscures, and hollows out the one-China principle. It also brazenly seeks to upgrade U.S.-Taiwan relations and emboldens “Taiwan independence” separatist activities, Hua said.

Over the past few days, many leaders around the world and people from different walks of life have voiced their opposition to the visit. The spokesperson of the UN Secretary-General has just said that the UN will continue to adhere to the UNGA Resolution 2758 and uphold the one-China principle, which shows that justice prevails among the people, said Hua.

The position of the Chinese government and people on the Taiwan question has been consistent. Safeguarding China’s sovereignty and territorial integrity is the will of the more than 1.4 billion Chinese people. No country, force or individual shall misjudge or underestimate the firm resolve, strong will and great capability of the Chinese government and people to defend state sovereignty and territorial integrity and to achieve national reunification and rejuvenation, said the spokesperson.  ■