Video: “The Belt and Road Initiative is the Road to International Development, Peace and Security” 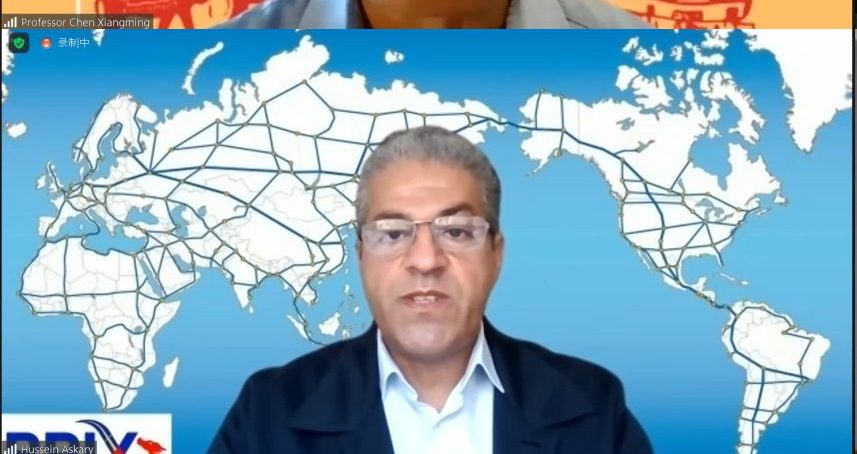 A seminar on the Belt and Road Initiative have been held on Tuesday online based on Stockholm launched by BRIX with the theme The belt and road initiative is the Road to International Development, Peace and Security.

Chinese Ambassador Cui Aimin made an opening remark saying that one of the good example of the Belt and Road Initiative was to make a land-locked country the Laos a land-linked country. This has impressed all the participants at the seminar.

Ambassador Cui said so far 144 countries have participated in the belt and road initiative and benefits many countries all over the world.

The most impressive remarks was made by Erik Solheim, former UNEP Executive Director and UN deputy Secretary General. He said that China’s GDP ranked No. 177 in 1971 when China just joined the United Nations, which was poorer than most of the African countries.

In 1992, China’s GDP per capita was just 420 US dollars which was also lower than many of the African countries.

But last year China’s GDP has ranked only second to the United States and if calculated in purchasing power, China even ranked the first. How could China achieve this great achievement?

Solheim summerized that China’s leadership played a decisive role in setting up the goals and tried their best to implement and achieve the goals. The second experience is to develop market based economy.

The third experience is to have good education for everyone. Now over 90 percent of the Chinese people can read and write while in many other countries in the world, there are still many people who are illiterate.

Most of the participants agree that the Belt and road initiative is not a threat to any country, but is the road to international development, peace and security.

Remarks by Ambassador Cui Aimin at the Webinar “The Belt and Road Initiative is the Road to International Development, Peace and Security”

Good morning! It gives me great pleasure to attend the Webinar “the Belt and Road Initiative is the Road to International Development, Peace and Security”. On behalf of the Chinese Embassy in Sweden, I wish to extend my congratulations to the webinar, my appreciation to its organizer BRIX, and my thanks to the guests attending and contributing to the webinar.

In 2013, President Xi Jinping proposed the initiatives of the Silk Road Economic Belt and the 21st Century Maritime Silk Road. Since then, a new chapter of development of China and the world has been opened. Though the Belt and Road Initiative (BRI) was proposed by China, it belongs to the whole world. Over the past eight years and more, acting on the principle of extensive consultation, joint contribution and shared benefits, China has been working with other countries to promote the high quality development of the BRI. The BRI cooperation is increasingly more robust and productive, and has received warm and extensive support from the international community.

The BRI friend circle is getting bigger. China has signed over 200 cooperation agreements with 149 countries and 32 international organizations. As an immensely popular global public good and the largest platform for cooperation, the BRI is increasingly attractive to cooperation and internationally influential. In Greece, the once almost bankrupt port of Piraeus has been revitalized and become the world’s fastest growing container port. In Laos, the China-Laos railway, passing through steep mountains and turbulent rivers, has made the land-locked Laos into a land-linked country. In Belarus, the “Great Stone” project has brought a modern industrial park to the local community. In Senegal, the China-aided rural well-drilling project benefits one seventh of Senegal’s population. A long list of such cooperation projects have been implemented, and are delivering real benefits to the BRI participating countries and their people.

The record of BRI has been impressive. Between 2013 and 2021, trade per year between China and other BRI countries has increased from USD 1.04 trillion to USD 1.8 trillion. China has accumulatively invested USD 161.3 billion in BRI countries, and the latter have set up 32,000 companies in China, with an investment of USD 71.2 billion. China’s investment in building economic cooperation zones in BRI countries has reached USD 43.08 billion, creating 346,000 local jobs.

Amid an ongoing pandemic and a turbulent international situation, the China-Europe freight train, despite difficulties in the global flow of goods and transport capacity, has conducted over 50,000 trips. Connecting over 180 cities in 23 European countries, it has been conducting over 1,000 trips per month for 24 months in a row. The China-Europe freight train, with its stability, reliability and efficiency in logistic services, offers strong support to the global industrial chains and supply chains, and injects strength and confidence in the open cooperation and economic recovery of the world. Since the pandemic began, China has provided over 2.2 billion doses of COVID-19 vaccines to more than 120 countries and international organizations, many of which are to BRI countries, which supported their efforts to fight the virus.

The BRI cooperation has bright prospects. Beginning with economic cooperation but extending far beyond, the BRI is increasingly a platform for improving global governance. It has made tangible progress in broad areas such as business projects, people-to-people connectivity and cultural exchanges. To defeat the pandemic, we forged a Health Silk Road to contribute to the global battle against the virus. To ride the wave of digitization, we proposed the Digital Silk Road to provide new momentum for the global economic growth. To expedite a low-carbon transition, we paved the Green Silk Road to facilitate a green global economic recovery post-pandemic. Every branch that extends from the BRI responds to a challenge of our times. They not only bring real dividends to the BRI participants, but also contribute wisdom and strength for the world to rise up to challenges, create opportunities and strengthen confidence.

Sweden has advanced technology and expertise, and China has entered a new stage of green, low-carbon and circular economic development, with its unmatched strength in its market and resources. When China and Sweden join hands to deepen green cooperation, a lot can be achieved in reducing pollution and carbon emission as well as protection of biodiversity. Our cooperation may also create more opportunities for other BRI countries, for their respective strengths to complement each other, to achieve win-win results and make contributions to the global sustainable development.

Our world today is living through accelerating changes unseen in a century and a still unchecked pandemic. They confront humanity with unprecedented challenges and ever pressing peace and security problems.  In a world that is overshadowed by the dark clouds of Cold War mentality and power politics and beset by constantly emerging traditional and non-traditional security threats, some countries attempt to expand military alliances to seek absolute security, stoke bloc-based confrontation by coercing other countries into picking sides and pursue unilateral dominance at the expense of others’ rights and interests. Factors such as sanctions and de-coupling result in disruptions to global industrial and supply chains, sustained hikes in commodity prices, and weaker international monetary and financial systems. All these have cast shadow over development worldwide, and pose threats to global peace and development.

In the face of a complex international landscape, President Xi Jinping proposed the Global Development Initiative (GDI) last year, calling for building global development partnerships that feature unity, equality, balance and win-win cooperation, with an aim to implement the 2030 agenda for sustainable development, to facilitate global development that is more robust, green and healthy. President Xi Jinping also recently proposed the Global Security Initiative (GSI), advocating a vision of common, comprehensive, cooperative and sustainable security, which follows the philosophy that humanity is an indivisible security community, and aims to create a new path to security that features dialogue over confrontation, partnership over alliance and win-win over zero-sum, bringing more stability and positive energy to the world.

Over the past eight years, from the BRI to GDI and GSI, and in its response to the question of the times “peace or war, development or recession, openness or isolation, and cooperation or confrontation”, China has time and again provided public goods for the world, and used its concrete efforts to act on its commitment of building a community with a shared future for mankind.

Despite the unprecedented challenges facing human society, and the new phase of instability and transformation for global development, people around the world are even more keen about pursuing peace, development and cooperation.

As President Xi Jinping points out, development is a timeless theme for humanity. Only through continuous development can the people’s dream for a better life and social stability be realized. The BRI pursues openness, inclusiveness and win-win results, upholds the principle of extensive consultation, joint contribution and shared benefits, and aims for high-standard, sustainable and people-centered progress, which echoes with the aspiration of people around the world. As the BRI becomes extensively implemented, the inter-connectivity and win-win practical cooperation enabled by the Initiative will deliver more benefits to economic growth and people’s well-being. It will contribute more to high quality economic development and shared prosperity, as well as world peace and stability.

With that, I wish the webinar a full success. Thank you!

videos were recorded by BRIX.