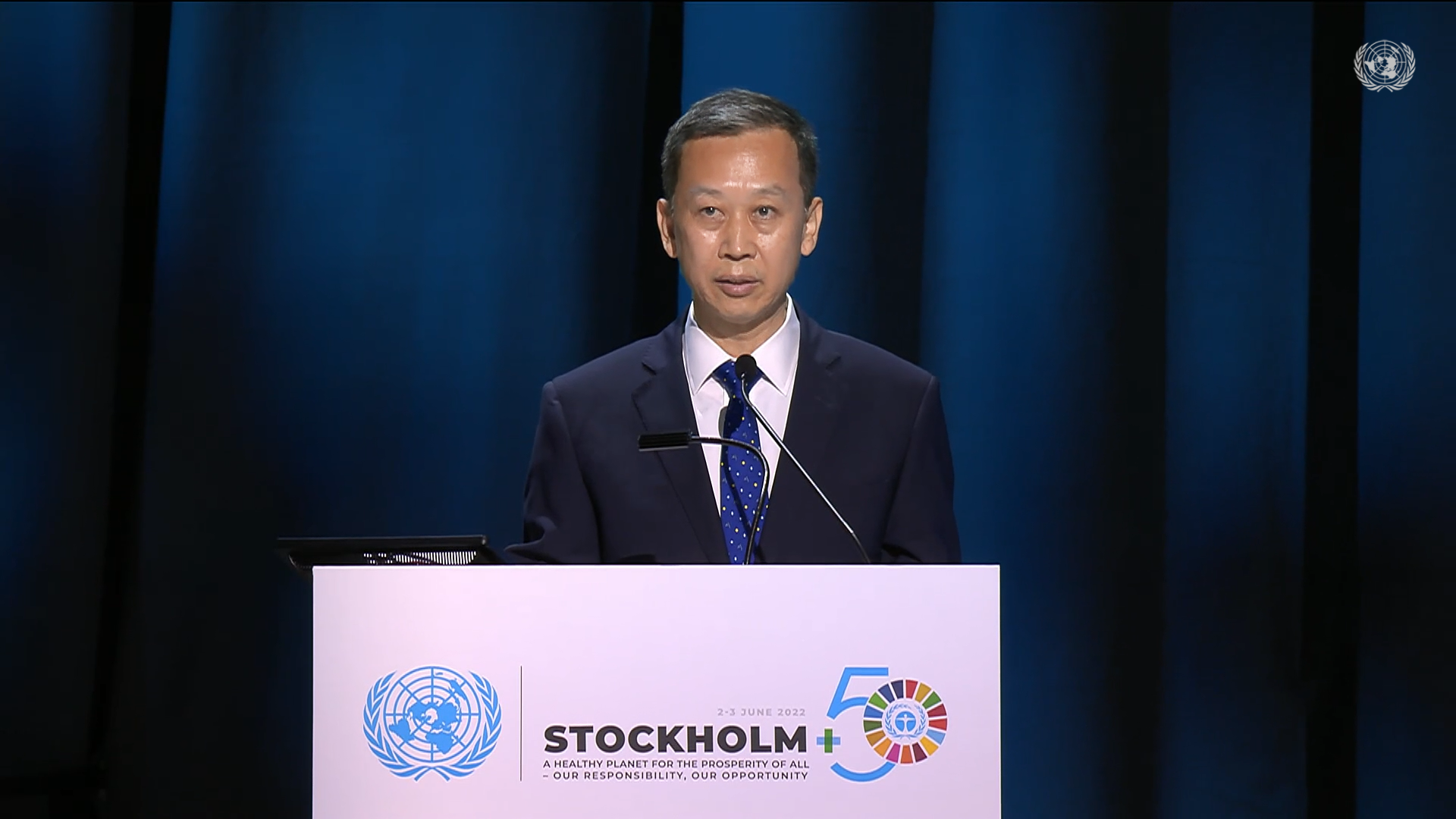 Stockholm, June7(ChinaEuropeDialogue) — Chinese Ambassador Cui Aimin participated in Stockholm +50 International meeting which was held on 2-3 June by the United Nations.

“Fifty years ago, the first meeting of the UN Conference on Human Environment marked the start of joint actions to protect the Earth, which symbolizes a general awakening on environmental issues by humankind.” said Cui.

Over the past 50 years, China has been deepening its understanding on the basic law of the nature-human relationship, following the basic national policy of resource conservation and environmental protection, implementing the strategy of sustainable development, and actively participating in the global environmental governance, he said.

He said that in the past nearly ten years, guided by the Xi Jinping Thought on Ecological Civilization, China has been putting ecological conservation high on its agenda, and making efforts that are of fundamental, trailblazing and long-term importance, which has seen unprecedented concreteness, intensity and effectiveness.

“First, China made coordinated efforts across various environmental systems. China’s forest coverage has reached 23%, and contributes to 25% of the world’s added green area and 20% of the world’s restored land. Second, China has been optimizing its industrial energy structure and pursuing green, low-carbon and circular development, with its coal consumption per unit of GDP significantly reduced and its development and usage of renewable energy ranking No.1 in the world. Third, China has been resolutely combating pollution and improving the ecological environment, with the quality of air and surface water continuously improving. Fourth, China has been deeply participating in the global environmental governance, including promoting the entering into force and implementation of the Paris Agreement, announcing the goals of carbon emission peaking and neutrality and not building new coal-fired power projects abroad. China has successfully hosted the first session of COP15, adopted the Kunming Declaration, and taken the lead by investing 1.5 billion RMB yuan to set up a protection fund, which injected strong political momentum into the global governance of biodiversity.” Cui said.

Going forward, China is willing to continue to join hands with the international community to protect Mother Earth, and share the beautiful world and a prosperous future.

—We must follow the principle of harmonious coexistence between human and nature. We must respect, follow the rules of and protect nature, and resolutely promote green and low carbon development and transition.

—We must uphold the notion of a community with a shared future for mankind. We must be united, act fast, and be committed to a model of sustainable development featuring increased production, higher living standards and healthy ecosystems.

—We must be committed to true multilateralism. We must concretely honor international conventions, and adhere to the principle of common but differentiated responsibilities and respective capabilities.

President Xi Jining proposed the Global Development Initiative (GDI) at the 76th session of the UN General Assembly, calling on the international community to attach importance to development topics of climate change and green development, which has been positively received by the international community. The Chinese side is willing to increase practical cooperation with other parties under the GDI framework, mobilize global development resources, revitalize global development partnerships, and create synergy for expediting the implementation of the 2030 agenda for sustainable development.

Long and difficult as the journey may be, sustained actions will take us to the destination. Let us build on past efforts and join hands to build a healthy planet for the prosperity of all! concluded Cui.