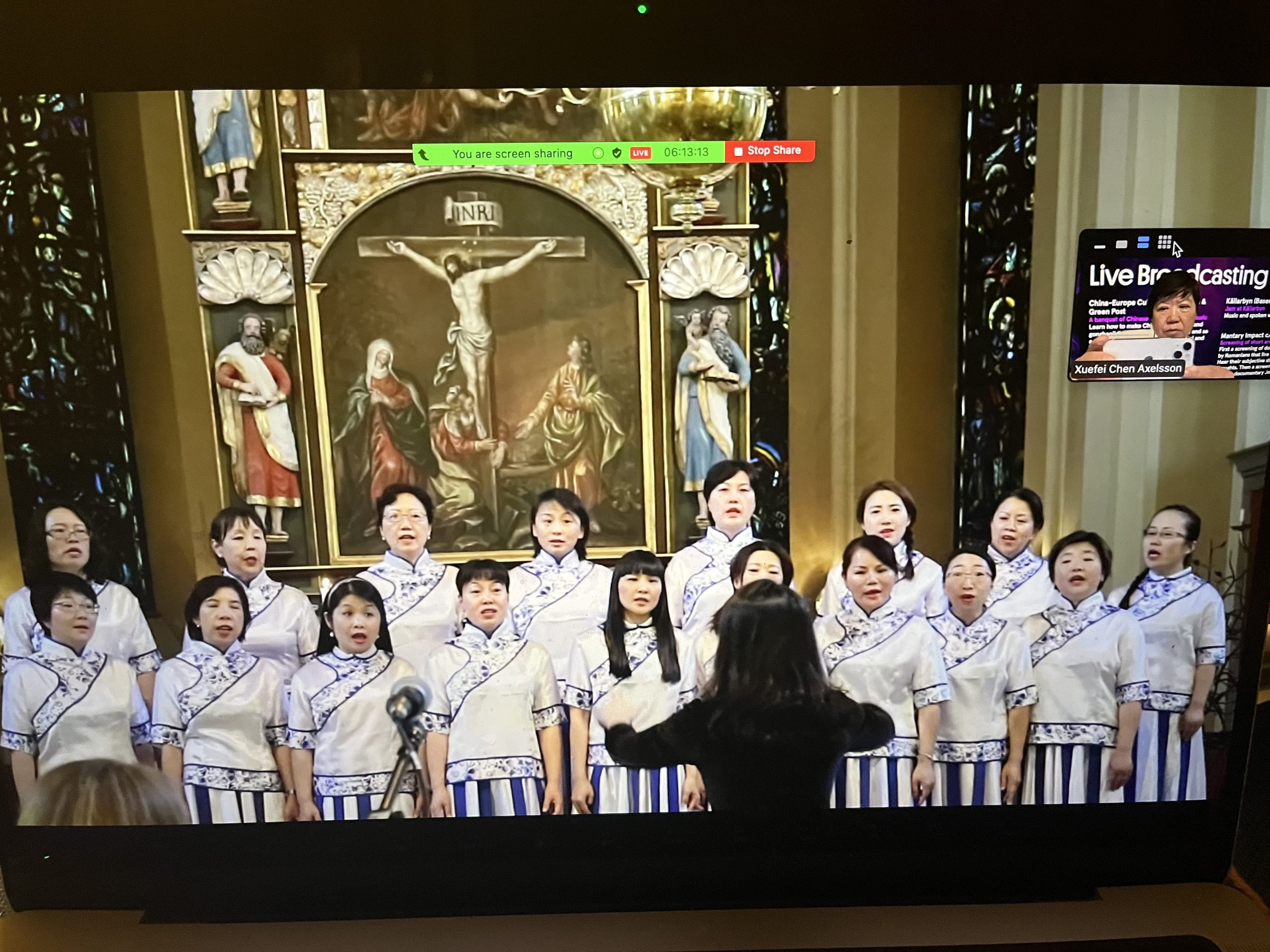 Stockholm, May.2(ChinaEuropeDialogue) — To promote cultural exchange between China and Sweden and peace in the world, China-Europe Cultural Association and Green Post jointly held a great live broadcast banquet of Chinese culture, art and music with partly recorded programs during the Stockholm Kulturnatt on April 23, 2022 in Stockholm.

Zhang said that cultural exchange is conducive to mutual understanding of each other and improve mutual trust too.

He hopes that Chinese in Sweden can conduct more such kind of activities to express themselves and integrate into the local society by enriching the local cultural activities.

Xuefei Chen Axelsson, President of China Europe Cultural Association and Chief Editor of Green Post said her organization has committed to cultural exchange and serving as a bridge between China and Sweden as well as Europe by jointly holding cultural events.

This was the second time that they held such an event. The first time they held the festival in Mandarin Paradis Restaurant and attracted about 200 people.

This year the programs include one hour of teaching how to cook Chinese food including making dumplings and stir-frying chicken meat.

Sun Yuan gave a wonderful performance of classic dance Dunhuang which was popular in the Tang Dynasty in the sixth century.

Li Xinrui and Su Menghan played Joga which was wonderful.

Luan Dehan played violin, Why the flower is so red? beautiful!

Yang Xiaoyin, a professional teacher in singing sings a song called Sunny on the way.

Xuefei Chen Axelsson plays a comedy or talk show, I, my hometown and my motherland which imitated her homeland’s accent and songs.

Famous singer Liu Keqing from Germany also sings a song to conclude the second hour, I and my motherland.

The third hour replayed some excellent songs sung by Zou Rongmei, such as I love you the snow in the north and Jesmine flower.

Zhai Yijia played Erhu Horse Racing. Ric Wasserman played Bob Dylen’s The Answer is in the wind. Xuefei read the Chinese translation of lyric condemning the war and calling for peace between Russia and Ukraine.

Xia Junjie sang a song called fireworks in the city.

Wu Jiangyan and her student played the concubine got drunk, master piece of Peking Opera of Mei Style.

Li Zhanchun sang I love you China the soprano song to end the third hour.

During the fouth hour, Xuefei Chen Axelsson showed us her trip to Xinjiang Uyhgor autonomous Region in China. It was a documentary of her trip and showed us how Xinjiang people enjoyed a happy and safe life.

During the fifth hour, Chen Axelsson showed us to Sichuan to visit Tibetan families and institute to learn about Tibetan culture. The trip also went to Hebei around Beijing where Winter Olympics was held.

Li Li , Beijing Artist is good at mountain and water ink paintings. Her works of Great Wall and the Mountains in Northern China are very impressive and large.

In the last hour, Xuefei guided the audience to make dumplings again and gave them a good show and rebroadcast some music. She also sang a couple of songs herself to end the show at the midnight.

About 600 audiences have watched the live show, in comparison of 200 in 2018. They also held a festival in 2019, but it was one week later than the Stockholm kulturnatt on April 28th which is also the fifth anniversary of the founding of CECA.

Xuefei Chen Axelsson said they will continue to participate in Stockholm Kulturnatt next year and will be in real stage if the covid-19 is more tolerable by 2023.

CECA has about 50 members of Chinese women mostly living in Sweden.