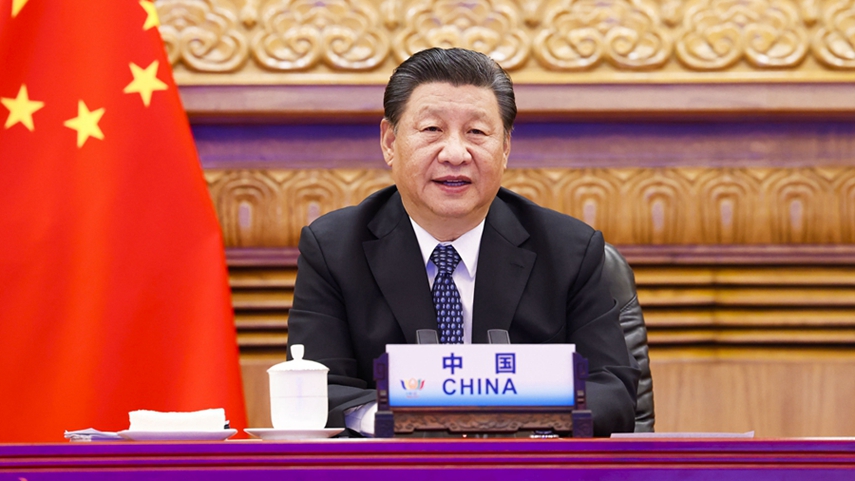 — Despite trade frictions over the past few years and constant calls for “decoupling with China” from some U.S. officials, new trends emerging in Sino-U.S. economic and trade development show where momentum really lies for the world’s two biggest economies.

— In the first eight months of this year, Chinese exports to the United States, rather than falling, expanded 22.7 percent year on year, according to official data.

— Failing to cripple the economic and trade ties between the two economies that are so deeply interwoven, U.S. restrictions weighed heavily on American enterprises and people and the global industrial and supply chains and served to prove that cooperation is the only right choice.

— Inevitably, the U.S. tariff increase took some toll on China, especially on products such as farm produce, light industrial goods and electrical appliances, but it has not dampened the U.S. market’s “rigid demand” for Chinese goods, which comes from the competitive prices and quality of made-in-China products as well as the economic complementarity between the two countries.

BEIJING, Sept. 21 (Xinhua) — Despite trade frictions over the past few years and constant calls for “decoupling with China” from some U.S. officials, new trends emerging in Sino-U.S. economic and trade development show where momentum really lies for the world’s two biggest economies.

In the first eight months of this year, Chinese exports to the United States, rather than falling, expanded 22.7 percent year on year, according to official data.

Likewise, a report by the American Chamber of Commerce in China earlier this year shows that two-thirds of the enterprises surveyed said they would increase investment in China.

Failing to cripple the economic and trade ties between the two economies that are so deeply interwoven, U.S. restrictions weighed heavily on American enterprises and people and the global industrial and supply chains and served to prove that cooperation is the only right choice.

Getting the relationship right is not optional, but something the two countries must do and must do well, according to Xi.

Yang Nan, president of a supplier in east China for major retailers of pet products and loungewear in the United States, said his firm has maintained growth in exports despite the trade frictions.

“Each day, we send more than 30 containers to the United States. That’s more than 10,000 containers a year,” he told Xinhua. His company’s exports to the U.S. market have maintained double-digit growth since June last year.

Customs data presented a similar trend in the larger picture. Since the United States imposed additional tariffs on Chinese products in July 2018, Sino-U.S. trade dropped in 2019 but was soon back to growth from 2020.

Inevitably, the U.S. tariff increase took some toll on China, especially on products such as farm produce, light industrial goods and electrical appliances, but it has not dampened the U.S. market’s “rigid demand” for Chinese goods, which comes from the competitive prices and quality of made-in-China products as well as the economic complementarity between the two countries.

Imports from China accounted for 19 percent of all U.S. goods imports in 2020, the highest among all trading partners of the United States, while four of 10 of the fastest-growing imports in the U.S. came from China, according to Forbes.

Fu Xiaolan, founding director of the Technology and Management Center for Development at Oxford University, said based on the comparative advantages and market choices, the two economies have established a mutually beneficial relationship that is highly complementary in structure and has a convergence of interests.

Such economic and trade complementarity has been enhanced in times of the pandemic. In 2020, China’s exports of mechanical and electrical products to the United States increased 9 percent, and those of laptops and mobile phones expanded 23.4 percent and 4.6 percent, respectively.

China’s exports of medical materials and medicines jumped by 30.7 percent during the period, customs data showed. To meet surging global demand, the daily output of masks in China once exceeded 100 million.

Seeing the order increase, Yang switched the company’s domestic production line of shirts into masks, and its mask production and exports during the pandemic peaked at seven million units in a week.

“Masks can be produced in any country, but only China reshuffles its production lines into other products and raises production capacity so efficiently,” Yang said.

U.S. importers absorbed more than 90 percent of the additional costs caused by the increased U.S. tariffs on Chinese goods, according to a report from Moody’s Investors Service in May.

Calculation by Americans for Free Trade, a coalition of more than 150 industry associations that are united in the fight against tariffs, also showed that Americans have paid over 90 billion U.S. dollars in tariffs since the trade war began.

In August, more than 30 of the most influential business groups from the United States called on the U.S. government to restart trade negotiations with China and cut tariffs on imports, saying they are a drag on the U.S. economy.

In the eyes of Yang, who has been doing textile business with the United States for more than 20 years, the Sino-U.S. trade will not be easily “decoupled.”

“If we compare China-U.S. relations to a giant ship, then economic and trade cooperation has been its ballast and propeller. When the ship sails against heavy winds and huge waves, we need to add more strength to the ballast and propeller,” said Qin Gang, Chinese Ambassador to the United States.

Rising above the challenges brought by the COVID-19 pandemic and the global economic recession, China recorded a four-percent growth in inflows, overtaking the United States as the largest foreign direct investment recipient last year, a report by the United Nations Conference on Trade and Development shows.

Some U.S. politicians, in the meantime, attempted to “decouple” from China by trying to bring manufacturing back to the United States, calling on U.S. enterprises to withdraw from China, increasing restrictions on technology investment in China, and isolating China with its allies.

Such moves resulted in a decline in the U.S. investment in China last year, especially in the fields of information technology and electronic equipment.

On the contrary, the European Union saw its actual investment in China rose 10.3 percent year on year in the first half of the year, while countries along the Belt and Road and the Association of Southeast Asian countries reported an investment increase of 37.6 percent and 36.8 percent in China in the first eight months, respectively.

U.S. companies are fully aware of the cost of missing the China market.

“If American companies are prevented from operating in China, our competitors will be able to take advantage of China’s economies of scale and rapid adoption of technology to outcompete U.S. companies everywhere else, including in our home market,” said Craig Allen, president of the U.S.-China Business Council.

China and the United States not only have direct links but have indirect links through other countries as well. The “decoupling” of the world’s first and second largest economies will have a far-reaching effect, said Yu Miaojie, a professor with the National School of Development at Peking University.

Bullish on the China market, multinational companies have increased their presence in China.

“For us, China is one of our biggest and most important markets,” said Frank Van Meel, senior vice president of Product Line Luxury Class BMW.

Van Meel said China copes very well with COVID-19 and was the first market that came up again out of the COVID-19. The country is now one of its fastest-growing markets.

Figures previously released by the BMW Group show that in the first half of this year the Munich-based company achieved bright results in China, delivering more than 467,000 BMW and MINI brand vehicles to Chinese customers, up about 42 percent year on year.

Huge market demand can bring more revenue to enterprises and dilute production costs, which is a major reason for increasing foreign investment in China, said Yu.

A complete industrial system and a strong supply chain is another reason why China is so attractive to multinational companies.

The U.S.-China Business Council said in its 2021 member survey that a majority of companies remain profitable, and more than 40 percent have plans to increase resource commitments in China over the next year.

The vast majority of respondents invest in China to serve the Chinese market, where they see strong growth prospects, the survey shows.

In recent years, China has introduced a raft of measures to accelerate opening-up and foster a market-oriented, law-based and internationalized business environment, in a bid to better accommodate overseas investors.

Further opening of China’s financial sector has provided the company with greater opportunities and space for development, the company has said.

The “decoupling” mindset has led to a host of calculated shots at Chinese hi-tech companies in an attempt to suppress China’s scientific and technological innovations.

An August ranking from Harvard University’s Growth Lab showed rising technological level of China’s exports since the start of the trade war in 2018. China ranked 16th globally on the Economic Complexity Index in 2019, climbing one slot from the previous year despite trade restrictions.

“The fact that no blockade or suppression can thwart China’s advances is ample evidence of the country’s growing strength in science and technology,” said Ye Peijian, an academician of the Chinese Academy of Sciences.

To China, innovation has always been about opening arms rather than closing doors, with cooperation as the overriding theme of scientific and technological undertakings, according to Chinese Minister of Science and Technology Wang Zhigang.

Dubbed as “China Sky Eye,” the Five-hundred-meter Aperture Spherical Radio Telescope (FAST) has been open to scientists around the globe since March this year, a signal that the country is open to cooperation with other countries. More and more researchers, especially foreign researchers, have applied to use FAST for observation and study.

So far, China has established innovation dialogue mechanisms with multiple countries, conducted joint research with over 50 countries and regions, and participated in major international science projects such as the International Thermonuclear Experimental Reactor.

Under the support of the Belt and Road science, technology and innovation cooperation plan, over 8,300 foreign young scientists have come to work in China, and 33 joint laboratories have been established.

Attempts to cut off the exchanges of ideas, people and technology and disrupt the supply chains will, in turn, undermine U.S. innovations, American industry insiders said, cautioning that continued “de-sinicization” acts would ultimately lead to “de-Americanization.”

Export restrictions are a “double-edged sword”: they will hurt not only Chinese high-tech enterprises but also firms in the United States and other countries that have business relations with their Chinese partners.

“In today’s increasingly interconnected world, suppressing China is tantamount to self-isolation, which will end up shooting oneself in the foot,” said Cui Fan, a professor at the University of International Business and Economics.