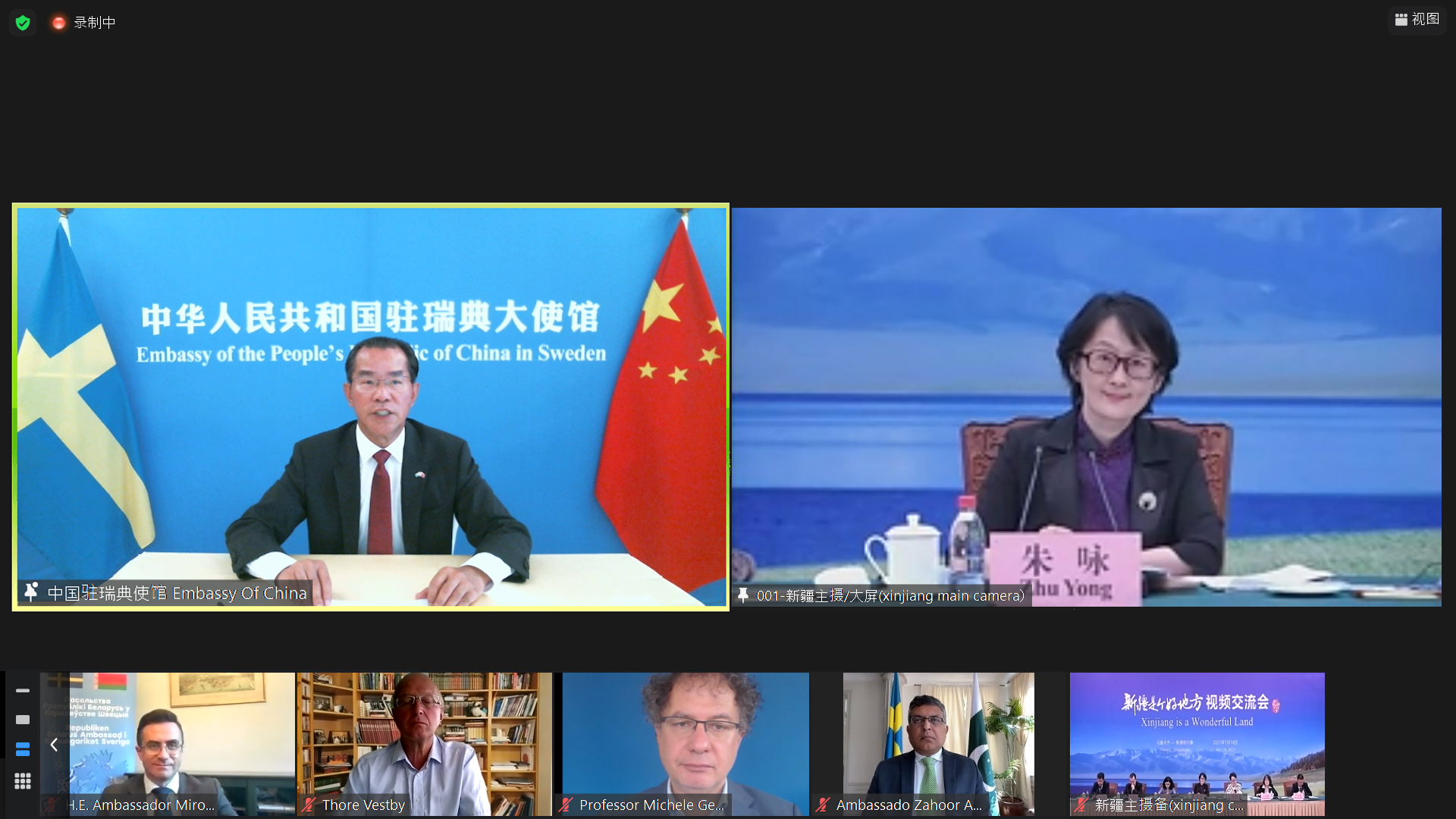 Stockholm, July 14(ChinaEuropeDialogue) — Chinese Ambassador to Sweden Gui Congyou has spoken highly of the achievements made in Xinjiang in recent years.

He made the remark at the webinar Xinjiang: The Wonderful Land and Gateway to the Belt and Road held on Wednesday both in Stockholm and Urumqi over the internet.

Gui said now in Xinjiang, it is just the good harvest season of fruits.

But for a long time, Xinjiang has suffered from terrorism and extremism. Thousands of violent attacks were conducted by terrorists and extremists, that resulted in tremendous casualties. To address terrorism and its root, the Chinese Government has been combating terrorism, and working to bring the people that were exposed to extremism back to normal life through education. Through these efforts, Xinjiang hasn’t had a terrorist attack in over four years, and stability and development have returned to Xinjiang. The Chinese Government’s policies in Xinjiang have the support of people of all ethnic groups in the region, as well as the understanding and support from the international community.

Despite the fact that Xinjiang is getting better and people in Xinjiang are having a better life, some forces in the US and European countries, would not hesitate to do anything to stigmatize and demonize Xinjiang, by even inventing this century’s biggest lies of “genocide” and “crimes against humanity”. Xinjiang’s cotton is as pure as snow, but these forces wouldn’t mind tainting it for their dirty political play. But lies are lies. In Xinjiang’s cotton industry, where 100% of seed sowing and 70% of cotton picking is done by machines, how can there be “forced labor”? Switzerland’s Better Cotton Initiative (BCI) also stated that not one case of forced labor has been found in Xinjiang. China’s latest national census shows a population growth of 4.03 million in Xinjiang compared with 2010, up 18.52%, which is 13.14 percentage points higher than the national average. The Uygur population grew by 1.623 million, up by 16.2%. How is this “genocide”?

What these anti-China forces care about is not human rights, but undermining Xinjiang’s stability and China’s development. It is in their play book to act on presumption of guilt, then “find” or “invent” evidence to fit their “guilty China” agenda. Their attempt to destabilize Xinjiang and contain China will not succeed. No matter what kind of shenanigans they stage, the march of the Chinese nation towards a great renewal will not be stopped. Xinjiang and the entire China will only achieve greater development.

Recently the CPC celebrated its 100th founding anniversary. Over the past 100 years, the CPC, with a commitment to rely on the people and serve the people, has received the most extensive support from the Chinese people. It grew from a small party of only 50 plus members to a party of over 95 million, a governing party of the most populous country in the world, leading the country to stand up and prosper. General Secretary Xi Jinping proposed the initiative of a community with a shared future for humankind, based on his vision of the trends of the world and humanity’s development. The Belt and Road Initiative (BRI), as the century’s major project, is a great practice to make a community with a shared future for humankind a reality.

Located at the heart of the Eurasian continent, Xinjiang borders eight countries, including Kazakhstan and Pakistan, making the region China’s gateway to its west, which gives it a unique strength in the BRI. Over the years, Xinjiang has been honing its inter-connectivity, improving infrastructure and developing trade with other countries. Xinjiang’s role as a core area of the Silk Road Economic Belt is strengthened, and it is at the most stable, peaceful and prosperous stage throughout history. As the BRI continues to develop, Xinjiang is attracting a growing number of foreign companies. Nearly 200 companies of the world’s top 500, China’s top 500 and industries’ top 100 have established presence in Xinjiang. Thanks to the CPC leadership, the people of all ethnic groups are tightly held together like pomegranate seeds, marching forward together in unity for a better Xinjiang.

Xinjiang is a land of open development. We sincerely welcome everyone to visit Xinjiang, talk to the folks there, and get to know Xinjiang for the wonderful place it is. We also welcome everyone that is interested to find opportunities to come to Xinjiang to study, work and live, and that is what this webinar is for.

Let me finish by wishing the webinar a great success.

Ambassadors from Pakistan and Khazakstan attended the webinar and listened to the introduction of Xinjiang by Liu Yong, an official from Xinjiang Uygor Autonomous Region.

About 50 people participated in the webinar and expressed that they have leart a lot about Xinjiang which is different from what they read from the western media and hope to have more such kind of webinars in the future.