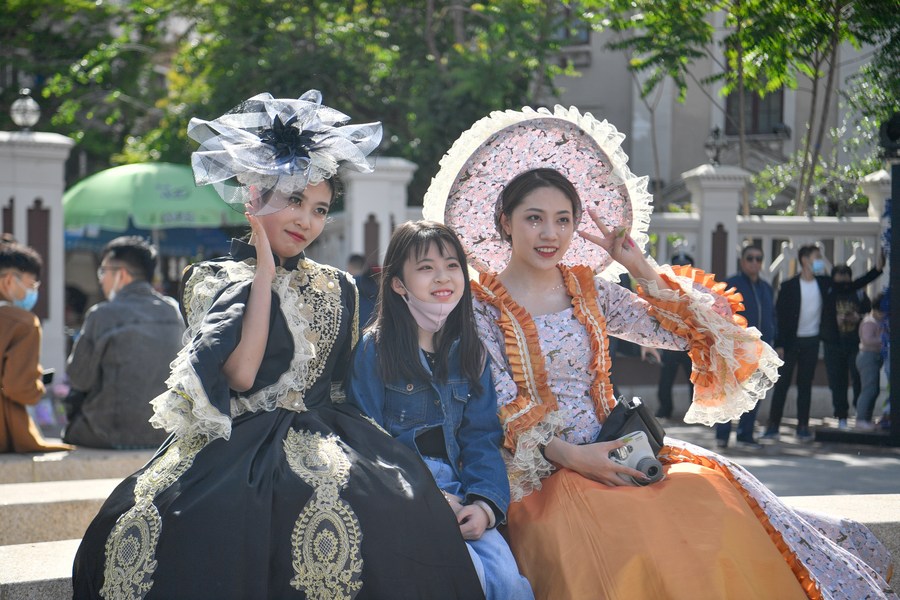 A tourist (C) poses for a group photo with performers at the Italian Style Area in Hebei District of north China’s Tianjin, May 1, 2021. (Xinhua/Sun Fanyue)

The news media have linked the travel boom to China’s success in containing the spread of COVID-19 and its ongoing mass vaccination campaign.

BEIJING, May 3 (Xinhua) — The May Day travel rush in China signals the nation’s stepped-up recovery from the COVID-19 pandemic, with people thronging at railway stations, airports and tourist sites, criss-crossing provinces.

Passenger trips on Chinese railways hit a new single-day high on Saturday, with nearly 18.83 million trips recorded, according to data released by the China State Railway Group Co., Ltd. The figure marks a 9.2-percent increase from the 2019 level, the first day of the International Workers’ Day holiday, which runs through Wednesday.

The news media have linked the travel boom to China’s success in containing the spread of COVID-19 and its ongoing mass vaccination campaign.

In mid-April, Chinese travel services provider Trip.com published forecast data for the May Day holiday, showing that bookings through the service provider have seen significant increases across many business areas compared with pre-pandemic levels.

As of April 14, holiday flight bookings had been 23 percent higher than the same period in 2019, with hotel bookings up 43 percent, attraction tickets up 114 percent, and car rentals up 126 percent, according to data from Trip.com.

“We forecast an explosive surge in tourism demand from last year, and it could be even higher than 2019,” Fang forecast prior to the holiday.

“Tickets for everything from domestic flights to theme parks are rapidly selling out in China ahead of its Labor Day holiday as the nation’s recovery from the COVID-19 pandemic gathers pace,” the Bloomberg News observed in a report last week.

“China’s early success in tackling the pandemic has helped to underpin its economic rebound,” it said, adding “its ability to contain sporadic outbreaks has given millions of people the confidence to stick to their domestic travel plans.”

Tourists have fun riding a boat at the Changshou Lake scenic area in southwest China’s Chongqing, on May 2, 2021. (Xinhua/Liu Chan)

Describing China’s May Day holiday as “a shot in the arm for domestic tourism,” the SCMP reported on Sunday that “the five-day break is set to be a fillip for local economies that have been hard hit by the health crisis.”

As a “record-breaking wave of Chinese tourists” are hitting the road for a May Day trip, the travel frenzy is “giving China’s economy a powerful short-term boost,” Reuters said in a recent report.

That is “in stark contrast to the rest of the world where many countries are still struggling to bring the virus under control, let alone open up domestic or even international travel,” the report added.

On Saturday, the Wuhan Strawberry Music Festival was staged in the central Chinese city of Wuhan, attracting thousands of people.

“It has not been easy to get to where we are today … I feel very excited to be here,” Reuters quoted Gao Yuchen, a 23-year-old Wuhan resident who attended the event, as saying.

The temporary rise in prices of tourism services and expected traffic congestion pushed many people to stay home for the holiday, although that doesn’t mean they aren’t spending.

The second “May 5” shopping festival kicked off in Shanghai on Saturday, with real-time consumer payout data from China UnionPay, Alipay and Tencent Pay — all Chinese payment platforms — showing that consumers forked out over 2.67 billion U.S. dollars in the first 24 hours.