Wang Yi: The Times of Arbitrary Interference in China’s Internal Affairs by Fabricating Stories and Lies Are Long Gone 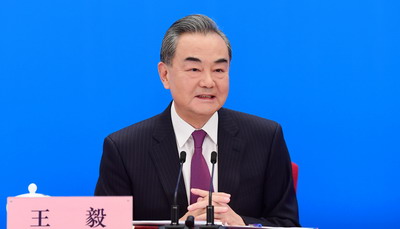 Wang Yi said that in the past few days, some Western forces got up on the stage one after another, launching their smear campaign and accusations against China. But what they should know is the times of arbitrary interference in China’s internal affairs by fabricating stories and lies are long gone.

Wang Yi pointed out that at the ongoing meeting of the United Nations Human Rights Council, over 80 countries made joint or separate statements to express their solidarity with and support for China’s legitimate position in Xinjiang-related issues. It is sufficient to prove that justice naturally inhabits man’s heart. The manipulation of a few Western forces is by no means representative of the international community. No matter how the wind blows, we will stand still. These perverse actions will never stop China from marching forward, nor will they reverse the development trend of history.