How to deal with major country relations? Wang Yi suggests 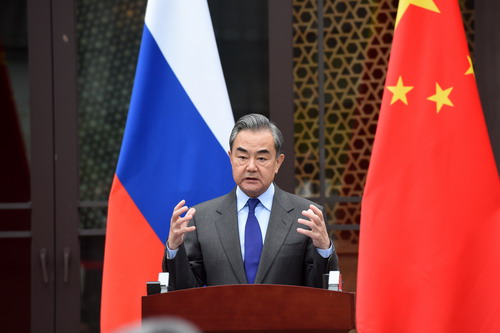 On March 23, 2021, State Councilor and Foreign Minister Wang Yi and Russian Foreign Minister Sergey Lavrov jointly met the press in Guilin City, Guangxi Zhuang Autonomous Region. One reporter asked Wang Yi, what sort of major-country relations was required in the turbulently changing world and how to establish such relations, since major-country relations are currently catching lots of attention from all over the world, with the U.S. stressing competition and power, while China and Russia underscoring cooperation and fairness?

Wang Yi said, our planet is facing more and more problems and challenges. And the world is watching how major countries will act at the historical juncture of once-in-a-century changes. In particular, how major countries get along with each other, dialogue or confrontation, cooperation or division, will largely determine the future and fate of mankind.

Wang Yi emphasized, unilateral sanctions have no basis in international law and only serve the political needs of a few countries. All countries should stand up against the so-called sanctions which are based on lies because they are a regression to the “law of the jungle”.

Wang Yi noted, the reason why China-Russia relations have withstood the test of changes in international situation and become a stable force in today’s world lies in the fact that the two sides always pursue non-alignment, non-confrontation and non-targeting of third parties; always respect each other’s core interests and accommodate each other’s legitimate concerns; always act responsibly and uphold justice, and firmly safeguard the international system with the United Nations at its core and the international order based on international law. China calls on all countries to revisit the purposes and principles of the Charter of the United Nations, cherish the international law system built by all countries through joint efforts since World War II, and work together to practice multilateralism in the real sense, promote democracy in international relations and build a community with a shared future for mankind that transcends institutional and cultural differences.