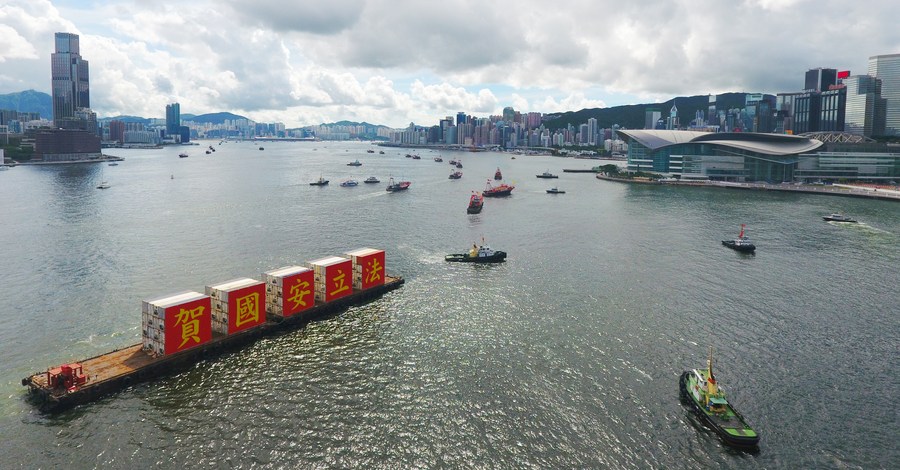 A ship carrying the slogan of “celebrating the passage of the Law of the People’s Republic of China on Safeguarding National Security in the Hong Kong Special Administrative Region (HKSAR)” sails at the Victoria Harbour in Hong Kong, south China, July 1, 2020. (Xinhua/Lui Siu Wai)

Hong Kong is an integral part of China and revising the electoral system there is China’s internal affairs. Pointing fingers over the issue runs counter to the principle of international law and the basic norms governing international relations.

It is legitimate, reasonable and necessary for the National People’s Congress, the highest organ of state power in China, to make a decision at the constitutional level to improve Hong Kong’s electoral system.

It is a common practice across the world for central governments to play a leading role in revising their electoral laws. For example, the U.S. House of Representatives on Wednesday passed an election reform bill, which requires U.S. states to set up independent redistricting commissions, among other mandates. In France, it is up to the National Assembly to stipulate the rules for local parliamentary elections.

Hong Kong is an integral part of China and revising the electoral system there is China’s internal affairs. Pointing fingers over the issue runs counter to the principle of international law and the basic norms governing international relations.

It is widely recognized by the world community that a country should be governed by those who love and are loyal to it.

In the United States, students pledging allegiance to the national flag and immigrants who wish to become U.S. citizens chanting the oath of allegiance is decades-old tradition, and the oath of public offices also unequivocally involves loyalty to the state.

No country in the world, including the United States, will allow its lawmakers and officials to betray the state or split the national territory. However, when it comes to China, some Western countries only adeptly use a different set of standards.

For a long time, aided by their agents in Hong Kong, Western forces have been exploiting the city for their own political interests, flagrantly interfering in China’s domestic affairs.

An evidence image of violent acts by rioters is displayed at a press conference in Hong Kong, south China, Nov. 15, 2019. (Xinhua/Zhu Xiang)

By collaborating with external Western force, the anti-China and destabilizing forces in Hong Kong have taken advantage of longstanding loopholes in the existing electoral system to try to disrupt the governance of the HKSAR government.

Improving Hong Kong’s electoral system and ensuring that the city is administered by patriots are imperative to safeguarding China’s sovereignty, national security and interests, and to making sure “one country, two systems” is well implemented.

China’s measures to maintain the city’s prosperity and stability in the long run has gained increasing support from the international community.

Belarus on Friday delivered a speech on behalf of 70 countries at the ongoing 46th session of the United Nations Human Rights Council, where it called on relevant countries to respect China’s sovereignty and quit interfering in its internal affairs, including those of Hong Kong. Furthermore, over 20 countries have voiced their support to China during the UN event.

China’s domestic affairs leave no room for foreign interference. With China’s unswerving determination to safeguard its sovereignty and security, Hong Kong’s long-term stability and development will be well guaranteed. ■