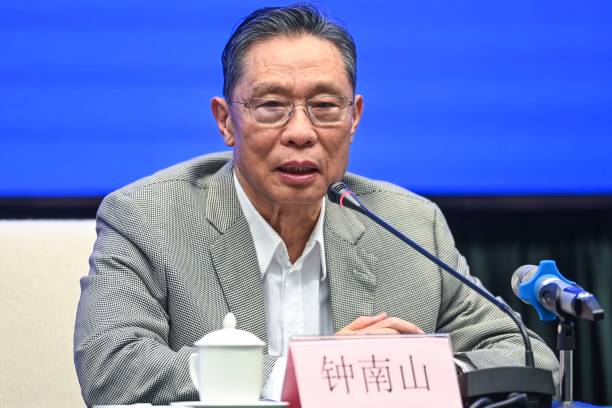 Zhong’s remarks were made at an online medical forum hosted on Sunday by Chinese tech giant Tencent, according to the report.

He said to a large extent, China’s victory in the battle against COVID-19 should be attributed to the “efforts in spreading medical knowledge,” according to the South China Morning Post.

The expert stressed the need to improve the public’s understanding of science, said the report.

Proposing the establishment of a mechanism for long-term cooperation among medical experts around the world, Zhong highlighted the importance of broadening the international base of knowledge, according to the report.

Zhong received the honor at a meeting held at the Great Hall of the People in Beijing to commend role models in the country’s fight against the epidemic, where the national honorary title, “the People’s Hero,” was conferred on three other outstanding medical professionals.

Zhong said there should be no relaxation in epidemic response despite the initial victory in China’s COVID-19 fight, and pledged to cooperate with colleagues around the country and the world to continue working on tracing virus sources, blocking transmission routes, and developing fast diagnosis, medicines and vaccines.

Why does China present its highest state honor to him?

Zhong was described by an official statement as a leading expert in China’s respiratory disease research and a “brave, outspoken and responsible doctor” who proposed epidemic prevention and control measures that saved numerous lives and made a great contribution to fighting both SARS and COVID-19.

Back in January, he publicly announced that the novel coronavirus was transmissible from person to person, alerting society at the early stage of the COVID-19 epidemic.

He led the compiling of coronavirus diagnosis and treatment plans, and has made great contributions to epidemic prevention and control, treatment of severe cases, and COVID-19 research.

In late January, two photos went viral on China’s cyberspace. In one picture, an apparently weary Zhong was dozing on a high-speed train. Another showed two train tickets from Guangzhou to Wuhan on Jan. 18.

These photos sparked a buzz among Chinese netizens, as Zhong earlier called on the public to avoid traveling to Wuhan unless absolutely necessary. The elderly doctor, however, went directly to Wuhan, where he declared one day later that there was “human-to-human transmission,” a judgment that was critical at times of confusion, and even changed China’s anti-virus cause.

It was not the first time that Zhong stood out and sounded the alarm during a public health emergency. In 2003, he proposed that a novel coronavirus was behind the SARS epidemic, challenging the then prevailing belief that chlamydia was the culprit.

He also pointed out that the spread of the virus in Beijing had not been effectively controlled, telling an inconvenient truth. He eventually helped move the capital’s epidemic prevention and control efforts onto the right track.

“In science, it is only right to seek truth from facts, and not to play safe, otherwise patients will be the victims. What is not in books, we explore through practice,” Zhong said in an interview.

“This spirit of seeking truth from facts is his most precious quality,” said Ran Pixin, director of the State Key Laboratory of Respiratory Diseases of Guangzhou Medical University. Ran has been studying and working with Zhong since 1993.

“During the epidemic, ordinary Chinese said they would listen to Zhong’s advice when they need to decide on whether to go out or not. It showed people’s genuine trust and appreciation for him,” said Ran.

Apart from being a leading coronavirus expert, Zhong is also known as a gallant fighter on anti-virus front lines and an optimist on China’s ability to tame highly infectious diseases.

During the SARS outbreak, the Guangdong-based doctor saved many lives by carefully formulating therapeutic solutions, which helped the southern Chinese province become one of the regions with the highest cure rate and the lowest mortality rate of SARS patients in the world.

At the end of January this year, when Wuhan was gripped by the COVID-19 epidemic, Zhong made a proclamation that boosted national morale: “Wuhan has been a heroic city. With the support of the whole country, Wuhan will definitely pass the test.”

On China’s internet, Zhong is famous for another identity: after photos circulated online showing the muscular doctor working out in gyms or playing basketball, he has become an unusual icon in the country’s fitness and sports sector.

Now, at 84, Zhong is still working at the very front lines of medical service. He meets with patients at a local hospital every week. On one afternoon, he sees around 10 patients with difficult and complicated pulmonary diseases.

His patients describe him as a considerate doctor, who would warm the stethoscope before use.

In 2009, The Lancet, an international journal of clinical medicine, published the top three papers of 2008, including one led by Zhong that received the highest number of votes.

Since the COVID-19 outbreak, Zhong has been busy attending international exchanges to introduce China’s anti-virus experience, and discuss the global strategy.

“Because we have gone through a difficult journey, we should support each other and let other countries take fewer detours through exchanges,” he said. Enditem