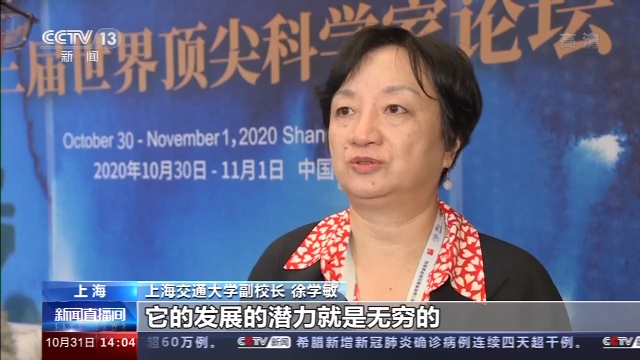 Stockholm, Nov. 2(ChinaEurope) — The 3rd World Laureates Forum opened on Friday in  Shanghai, China, bringing together more than 300 global scientists, including 61 Nobel Prize winners, to this scientific feast online or offline, with the discussions focused on current topics of concern, such as the global spread of the coronavirus, according to CCTV web reports.

Attending scientists stressed that China should seize the development opportunities and continue to enhance its basic scientific research amid the current intense scientific and technological competition worldwide.

Xu Xuemin, vice-president of Shanghai Jiao Tong University (SJTU) believes that Chinese universities, as bases for encouraging and advocating original research, should respond to the state’s call on scientific and technological innovation in the first place, and thoroughly implement the strategies of rejuvenating the country through science and education, strengthening the country through talent building and innovation-driven development, so as to stimulate the innovation vitality of universities.

“When we have our own original creation, the potential for our development will be limitless, and we will not be subject to the stranglehold of others. It is of vital importance for our country to get powerful. Therefore, we should double our efforts in promoting research of basic subjects and basic science,” she said.

Wang Yifang, director of the Institute for High-Energy Physics under the Chinese Academy of Sciences.

Chinese academician Wang Yifang, who is also the director of the Institute for High-Energy Physics under the Chinese Academy of Sciences, believes that innovation plays a pivotal role in China’s modernization. The country needs to strengthen its capacity for basic scientific research, so that it can participate in international cooperation with more confidence.

“We hope to deepen our knowledge about basic science and strengthen research in basic science in cooperation with all countries, for basic science concerns the community with a shared future for humankind, and this is the common development direction for us all, so we should stick to the direction. We hope to get strong support from the governments and the public,” said Wang.

Roger Kornberg, winner of the 2006 Nobel Prize in Chemistry and chairman of the World Laureates Association, expressed his appreciation for China’s efforts in promoting international science exchange.

“China is probably the only country able to host such a conference. The challenges of bringing together 137 laureates of various prizes as well as a very large number of other participants and young people is a logistical nightmare and really almost impossible to accomplish. And yet, the leaders of this effort in China have succeeded and done a brilliant job in this proc,” said the Nobel laureate.

Michael Levitt, winner of the 2013 Nobel Prize in Chemistry and vice chairman of the World Laureates Association.

The forum, which was initiated in 2018 by the World Laureates Association, was organized by the Shanghai Municipal Government and has been held in every October in Shanghai over the past two years.

It aims to promote basic science research, advocate international cooperation, support the growth of young talents and contribute to a better future for mankind.