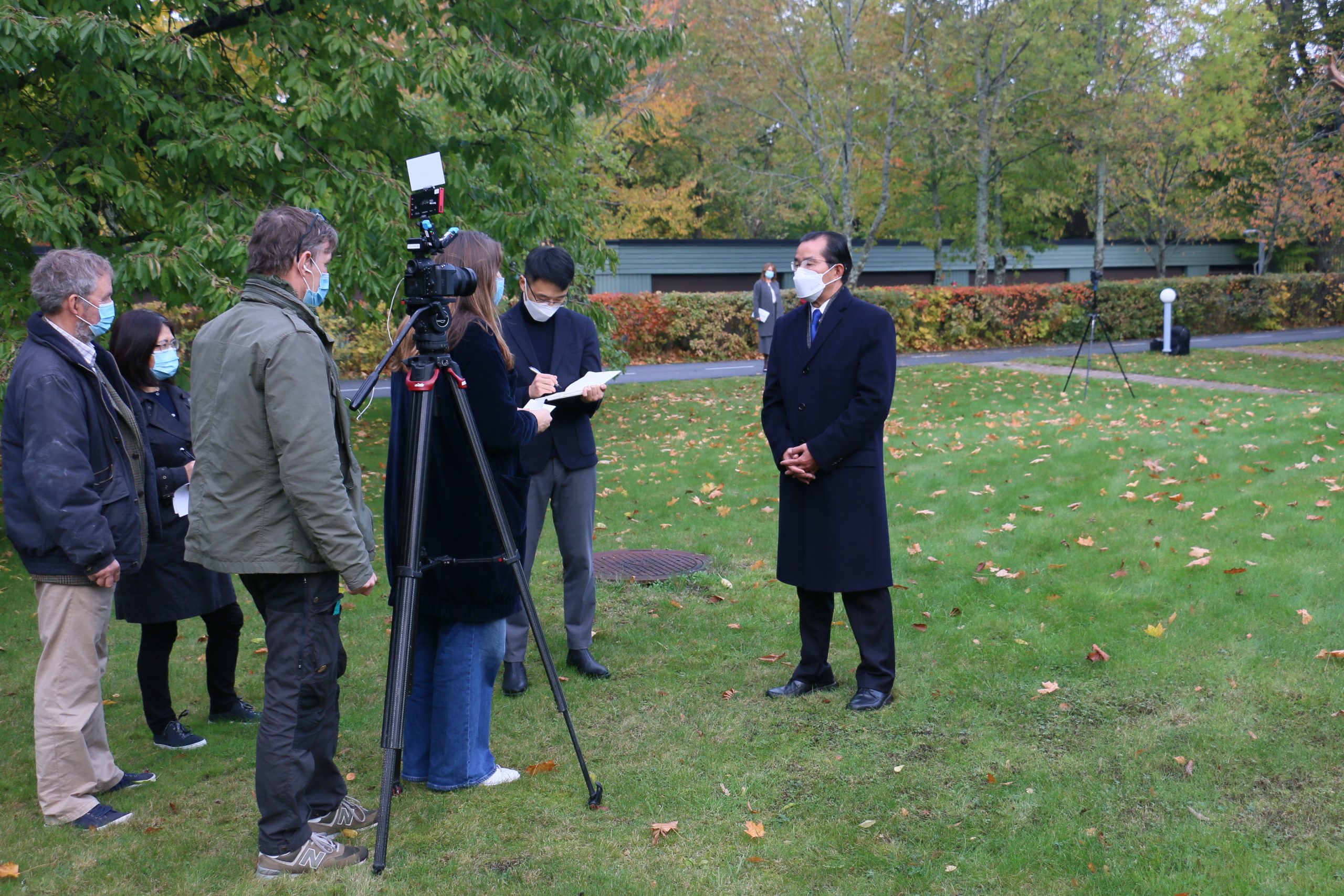 On 21 October, Ambassador Gui Congyou gave an exclusive interview at the embassy with SVT’s Rapport and Aktuellt on 5G Issues Concerning Chinese companies in Sweden.

Q: Mr. Ambassador, what is your response to Sweden’s decision to ban Huawei and ZTE from its 5G network?

Ambassador Gui: This decision is wrong. Our embassy’s spokesperson made a statement yesterday on this decision, so did the spokesperson of China’s Ministry for Foreign Affairs today. Sweden has been an advocate for open development and free competition, and Sweden’s economic success is also attributable to its openness. Chinese companies like Huawei and ZTE have been in Sweden for many years. They comply with laws and regulations in Sweden, and make important contributions to Sweden’s infrastructure and economic development. There is good cooperation and competition between Huawei, ZTE and Sweden’s Ericsson, which benefits ICT innovation. Sweden’s decision is an abuse of the concept of “national security”, which uses administrative means and state power to exclude and crack down on specific Chinese companies. Such a decision goes against principles of market economy and free competition, to which we express strong discontent and objection. It is hoped that the government of Sweden will correct it as soon as possible, and reconsider this decision.

Q: PTS, Säpo and the military of Sweden claimed that China poses a threat to Sweden’s security, including conducting cyber espionage on Sweden. Are they wrong?

Ambassador Gui: I think they are wrong. These authorities lack a basic understanding on China’s foreign policies, which is China does not pose a threat to any other country. Internet based development represents a new trend and phenomenon of the world. China is also a victim of cyber thefts and other cyber security violations. We firmly oppose any claims that accuse China of posing a “threat” to Sweden without any evidence. In fact, China has been a contributor to cyber security. For example, not long ago the Chinese side proposed the Global Initiative on Data Security. The purpose of the initiative is to work with countries around the world to protect cyber and digital security. We hope the government of Sweden will join the Chinese side in protecting cyber security together, instead of making unfounded accusations against China.

Q: Head of Säpo said China is spying on Sweden, which is why Huawei and ZTE is banned from Sweden’s 5G network. Is he wrong?

Ambassador Gui: Of course he is wrong, and we categorically reject such unfounded accusations. Huawei and ZTE have been in Sweden for over 20 years. They follow Sweden’s laws and regulations, and never violated the law. If you are interested, you may ask the head of Säpo, ask him whether there is any evidence at all supporting “Huawei poses threats to Sweden’s security”. Let’s have the fact speak. Huawei has since long ago proposed to the government of Sweden, that if Sweden is concerned about its security, they may sign a “no backdoor” agreement. Now the Swedish side can neither present any evidence, nor wants to sign a “no backdoor” agreement with Huawei, and it just arbitrarily bans Huawei. Of course we object to it.

Q: Swedish authorities’ views are quite different from yours. Why would they hold such views? If what they believe is not true, why would they lie?

Ambassador Gui: Maybe you need to ask them this question. Ask them why exclude Huawei and ZTE without any evidence? Ask them why they don’t want to sign a “no backdoor” agreement with Huawei? We are also waiting to hear their answer.

Q: Did the Chinese side and yourself have any discussion with the government of Sweden about it?

Ambassador Gui: There has been close communication between us and the government of Sweden and between Huawei and its Swedish partners. First, there are zero facts pointing to security problems in the equipment of Huawei and ZTE. The decision of the Swedish military and security authorities does not have any factual basis. Second, Huawei has announced to the world that if any country is concerned about security issues, they may sign a “no backdoor” agreement with Huawei. The communication on this issue has been smooth. But we found the attitude of Swedish military and security authorities astonishing, so did Huawei’s Swedish partners.

Q: The spokesperson of Ministry of Foreign Affairs of China said today, if Sweden refuses to change its decision, Sweden and Swedish companies will face consequences. What specifically are the “consequences” ?

Ambassador Gui: We hope the government of Sweden will make a wise and right decision, to avoid causing any negative effect on the Swedish companies in China and our bilateral practical cooperation. There are more than 600 Swedish companies in China. They are doing quite well and are committed to expending the Chinese market. We hope the government of Sweden will work with the Chinese side towards the same goal, and work for facilitating conditions and a good environment for Swedish companies in China. It is hoped that the Swedish side will take a positive attitude to achieve positive results, instead of a negative attitude that leads to negative results.

Q: I’m not quite sure I understand your answer. Do you mean that there will be consequences?

Ambassador Gui: Opening up is not a one-way process. Markets need to be mutually open. We hope the government of Sweden will provide Chinese companies in Sweden with a free, open, fair, impartial and non-discriminatory environment. We understand that the government and companies of Sweden hope to see further opening of the Chinese market. Under the premise of mutual opening up, China will open up its door even wider to them. Therefore, we hope the government of Sweden will correct its decision, work with China toward the same goal, and take a positive attitude, which will benefit us all. We should not do anything that does no good to anyone.

Q: If the government of Sweden does not change its decision, still not allowing Huawei and ZTE in Sweden’s 5G network, will there be any consequences? Will Swedish companies be sanctioned?

Ambassador Gui: I understand your question, but my answer is still that we hope to see a positive decision by the Swedish side and a positive result. We hope the government of Sweden will correct its decision as soon as possible. If the Swedish side excludes specific Chinese companies from its 5G market, it cannot be without consequences. Just as I said, market opening should be mutual.

Q: What will be the consequences?

Ambassador Gui: Undoubtedly, it will negatively affect China-Sweden practical cooperation and the operation of Swedish companies in China. We hope that the government of Sweden will be sober of this and correct its decision immediately.

Q: Well, are you talking about sanctions on Swedish companies in China, or making it more difficult for them to operate in China?

Ambassador Gui: China provides a good business environment and facilitating conditions for the lawful operation of all foreign companies in China, and is willing to open up the market further to them, including Swedish companies. We hope that the government of Sweden will change its wrongful decision of excluding Chinese companies from Sweden’s 5G market, to avoid negatively affecting Swedish companies’ growth in China. I understand that you asked this question from the perspective of the worst scenario, but I prefer to answer your question in a positive attitude. We hope to see positive results.

Q: To me, your answer sounds like a threat to the government of Sweden, that is if they do not change the decision, there will be consequences. Is it what you are trying to convey? A threat?

Ambassador: We don’t like “threat”. We are conveying a hope.

Q: What is the message that you want to communicate to the government of Sweden?

Perhaps you and I have different interpretations of the same thing. For example, when I say “I hope the weather today could be warmer”, you should not interpret my hope as a threat to the weather here. We always approach an issue from a positive perspective and solve the issue with a positive attitude. When we say we hope the government of Sweden will correct its decision, we are conveying a positive hope to the government of Sweden.