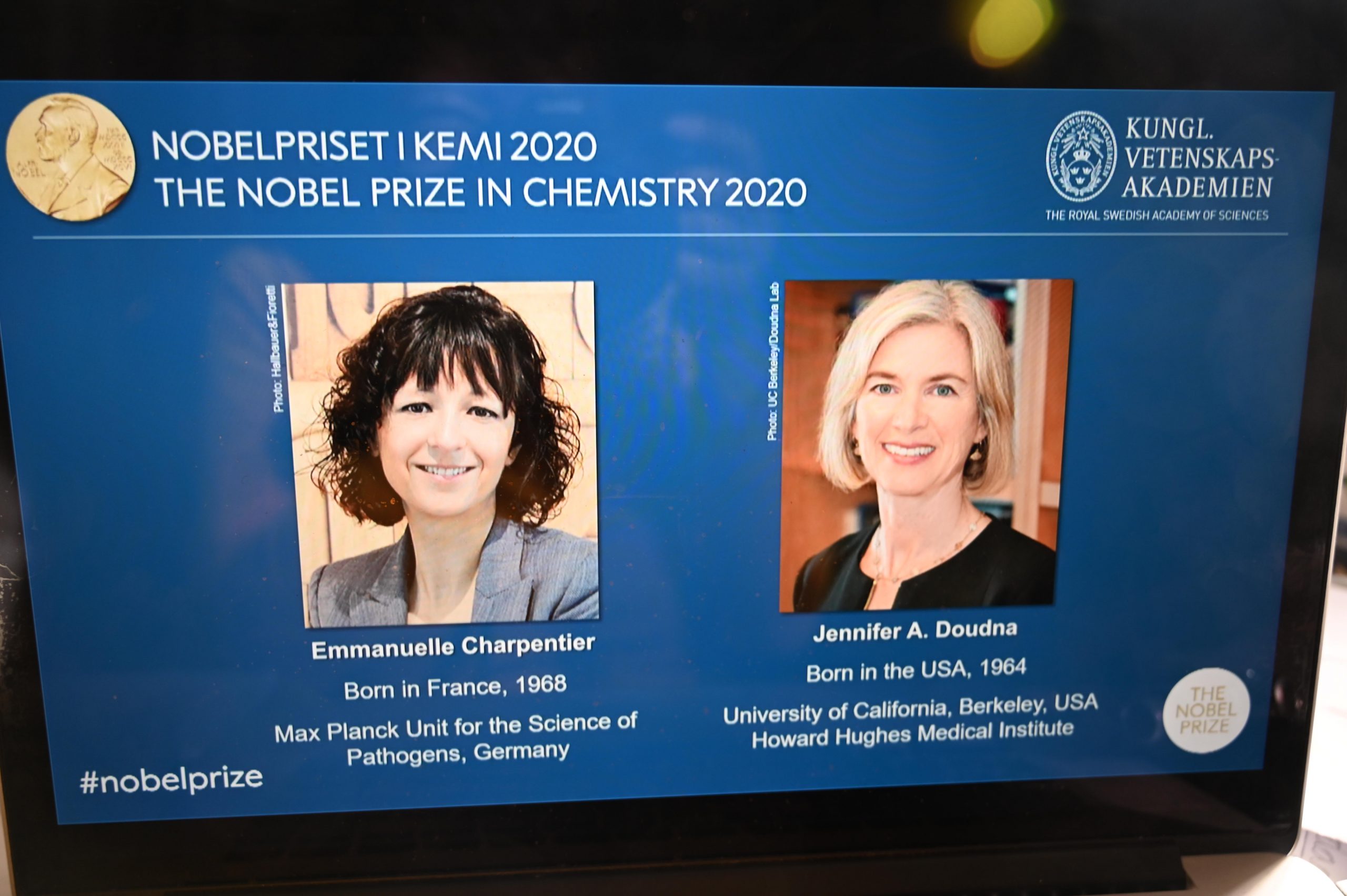 STOCKHOLM, Oct. 7(ChinaEuropeNews)– The Royal Swedish Academy of Sciences has decided to award the Nobel Prize in Chemistry 2020 to Emmanuelle Charpentier from Max Planck Unit for the Science of Pathogens, Berlin, Germany and Jennifer A. Doudna from University of California, Berkeley, USA for the development of a method for genome editing”.

Genetic scissors: a tool for rewriting the code of life

Emmanuelle Charpentier and Jennifer A. Doudna have discovered one of gene technology’s sharpest tools: the CRISPR/Cas9 genetic scissors. Using these, researchers can change the DNA of animals, plants and microorganisms with extremely high precision. This technology has had a revolutionary impact on the life sciences, is contributing to new cancer therapies and may make the dream of curing inherited diseases come true.

Researchers need to modify genes in cells if they are to find out about life’s inner workings. This used to be time-consuming, difficult and sometimes impossible work. Using the CRISPR/Cas9 genetic scissors, it is now possible to change the code of life over the course of a few weeks.

“There is enormous power in this genetic tool, which affects us all. It has not only revolutionised basic science, but also resulted in innovative crops and will lead to ground-breaking new medical treatments,” says Claes Gustafsson, chair of the Nobel Committee for Chemistry.

As so often in science, the discovery of these genetic scissors was unexpected. During Emmanuelle Charpentier’s studies of Streptococcus pyogenes, one of the bacteria that cause the most harm to humanity, she discovered a previously unknown molecule, tracrRNA. Her work showed that tracrRNA is part of bacteria’s ancient immune system, CRISPR/Cas, that disarms viruses by cleaving their DNA.

Charpentier published her discovery in 2011. The same year, she initiated a collaboration with Jennifer Doudna, an experienced biochemist with vast knowledge of RNA. Together, they succeeded in recreating the bacteria’s genetic scissors in a test tube and simplifying the scissors’ molecular components so they were easier to use.

In an epoch-making experiment, they then reprogrammed the genetic scissors. In their natural form, the scissors recognise DNA from viruses, but Charpentier and Doudna proved that they could be controlled so that they can cut any DNA molecule at a predetermined site. Where the DNA is cut it is then easy to rewrite the code of life.

Since Charpentier and Doudna discovered the CRISPR/Cas9 genetic scissors in 2012 their use has exploded. This tool has contributed to many important discoveries in basic research, and plant researchers have been able to develop crops that withstand mould, pests and drought. In medicine, clinical trials of new cancer therapies are underway, and the dream of being able to cure inherited diseases is about to come true. These genetic scissors have taken the life sciences into a new epoch and, in many ways, are bringing the greatest benefit to humankind.

Prize amount: 10 million Swedish kronor, to be shared equally between the Laureates.

Hansson announced that this year the Nobel awarding ceremony will not be held in Stockholm Concert Hall due to the Covid 19. But the lectures will be held online through video. The royal banquet has been cancelled too.

But these laureates will be invited next year to attend the grand awarding ceremony.

At the press conference, Emmanuel Charpentier answered the questions from the journalists.

She said she was very happy to hear the news. She was so moved by the news and tears almost came out of her eyes. She felt this will greatly inspired young girls to study science and she hopes that more young girls will study science.

Talking about her study at Umea University in northern part of Sweden, she said it was long nights and short lights, the winter was long and summer was very short. But it was there she began to have an idea what she would do in the future. She felt the free and open academic atmosphere at Umea University and that inspired and encouraged her very much.

Later, she went to California too and coming back to her own lab, she was more mature in developing her ideas.

She said it was during the 1980s that genom coding idea came to awareness and she thought if she could find a way to edit genom, that will be very helpful for the study of the genes.

In fact, the finding of the gene sequence and the editing of the genes has been applied by many scientists in eliminating the bad genes for example in treating or avoiding the genetically inherited diseases.

But professor Gustavsson also stressed during an interview that the nobel laureates themselves also are very careful in where and when this should be used, morally it should be well regulated.

Nobel Prize® is a registered trademark of the Nobel Foundation.